Salukis: A Gift from Allah 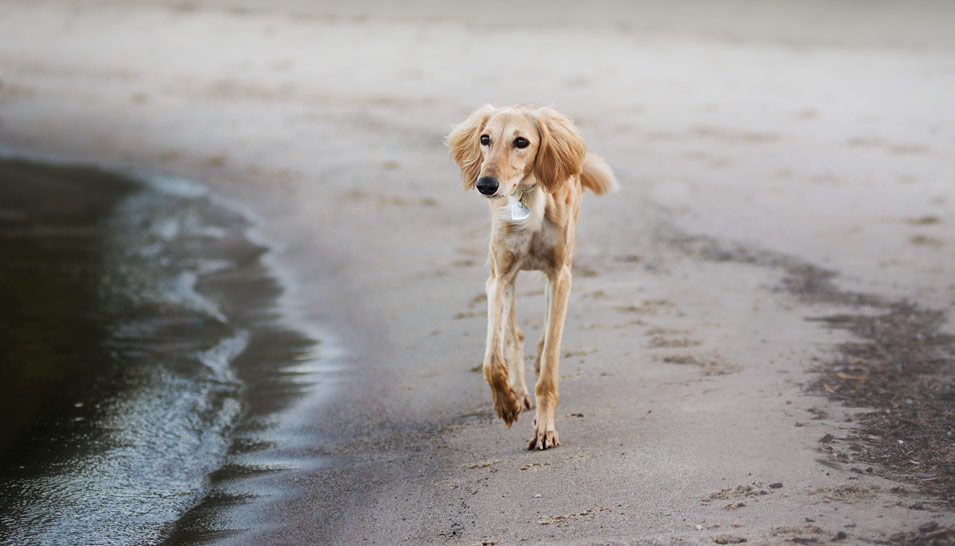 In May of this year, AXP published an article, “A Street Called Straight,” featuring Bert Seal and his amazing corpus of work dating from his years working as a photographer for Aramco. Bert snapped a treasure trove of priceless images documenting the history of the company, the country, and the people of Arabia. One of his images published with that article shows four kneeling Bedouin with two small children gathered in a circle sharing a meal. Peeking over the shoulder of one of the women is the unmistakable head of a Saluki, eager to join in the repast. Anyone who’s ever spent serious time in the Kingdom will instantly recognize that gentle face and the loyal, graceful, noble, intelligent breed to which it belongs. 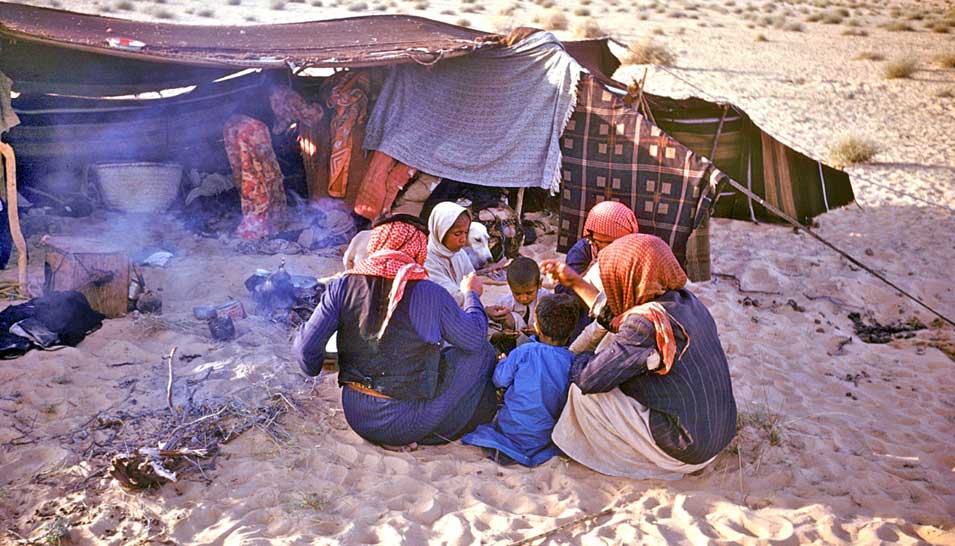 “All dogs go to heaven.” That according to an animated film of the same name dating from 1989. All Salukis, on the other hand, come from heaven. That according to Arabian legends dating from many centuries ago. To the people of the desert, the Saluki was (and is) a gift from Allah Himself. When the time comes for them to move on, all Salukis assuredly return to heaven, to their original home by God’s side.

For thousands of years BCE, in the age of the pharaohs, the Saluki was known as the “Royal Dog of Egypt.” Back then, only the nobility were allowed to own them. In modern-day Saudi Arabia, the Saluki is still revered to by many as “The Dog of Kings.” Yet, in contrast to what was the case in Dynastic Egypt, in the age of Ibn Saud and his successors, all Saudis are welcome to own Salukis, whether they be Bedouin or royal, as Bert’s photograph dramatically attests.

If you’ve ever owned or spent time around a Saluki, you’ll know the feeling you get from being in their presence: they are the true royals, and you serve them at their discretion. Many breeds of dogs have been known to “rule the roost,” begging the eternal question, Who’s the boss here—the human so-called owner or the dog? Why, the dog, of course, especially if it happens to be a Saluki.

The Saluki rules quietly and gently, but firmly. It allows its owners to think they’re in control, but the Saluki knows the truth. Nowhere is that more evident than when you and your Saluki are out on a walk, you’ve let him or her off the leash, and suddenly a rabbit or a squirrel or some other small animal appears in the distance.

The Saluki is considered a member of the sighthound group of dogs, along with Afghans, Borzois, Greyhounds, Italian Greyhounds, Whippets, Irish Wolfhounds, and assorted other exotic breeds. They’re called sighthounds for a reason: their vision is extraordinary. A Saluki or a Borzoi or any of their kin can spot the smallest of critters from a long distance away, things that go totally unnoticed by the human eye. The Saluki’s sharp, eagle-eye vision helps explain the other-worldly, far-away look in its eyes it’s famous for.

The instant your Saluki spots that rabbit or squirrel, it’s off and running, ears flopping, legs stretching, totally oblivious to anything save its prey. Any commands emanating from you such as “stop” or “heel” or “come” go totally unnoticed. At such moments, you can forget about obedience for a while. Your Saluki will decide if and when it will next stop or heel or come at your so-called command. Salukis will obey in such a way only when they’re good and ready, and not a minute sooner.

That go-where-you-want-to-go character trait is known as a dog’s “Wanderlust Potential.” There’s a 1-to-5 star scale used to measure it. Salukis are rated 5 stars—the maximum—only because the scale stops at 5 and doesn’t go up to 6. If it did, the Saluki would be there. So, if spending your time with a free-spirited, wanderlust-driven Saluki is not your cup of tea, you might want to consider instead a breed with a 1-star rating. For those of you who like to think small—as in “lap dog”—a 1-star Chihuahua or a Shih Tzu is a good possibility. For those of you who like to think big—as in “bigger is better”—a 1-star Saint Bernard or Rottweiler just might be the right fit.

Dogs also are measured according to something called their “Prey Drive.” That’s another elemental force that kicks in when your Saluki spots that squirrel. On that scale, Salukis again rate 5 stars.

Variously known as the Arabian Hound, Persian Sighthound, Gazelle Hound, Persian Greyhound, or Tanji, the Saluki is one of the oldest known dog breeds in the world. Stone reliefs depicting Saluki-like dogs date from seventh millennium BCE Sumeria. Images of Salukis were found among the treasures of King Tut’s tomb painted some 5,000 years later and discovered 3,200 more years after that.

According to one aficionado of the breed, the Saluki is “as brisk as the wind, as slim as a supermodel and diligently devoted to his/her pet parents.” That perfectly describes the Salukis I’ve known. Years ago, the brother of an American friend of Finnish descent named his Saluki “Tuuli”—the Finnish word for “wind.” I’ve always thought that Tuuli was the perfect name for a Saluki, or for a sailboat, or for both. The graceful sight of a Saluki coursing across an open field or stretch of desert at nearly 40 miles an hour, the feathering of its tail and ears and legs streaming behind it like banners in the wind, is stunning to behold.

There’s an on-going debate over the question of where on earth exactly the Saluki originated (other than in heaven). Some say it came from somewhere in eastern Anatolia (present-day Turkey); others maintain that it came from further east, past the Caspian Sea in Turkestan in Central Asia; still, others insist that the breed originated somewhere in the Fertile Crescent stretching from Mesopotamia south and west along the Mediterranean coast to the Nile. All I know for sure is that I saw Salukis everywhere I went in the Kingdom in the ’70s, ’80s, ’90s, and ’00s. I doubt that things have changed very much since then dog-wise.

As widely popular as Salukis may be in the KSA, Americans have been slow to appreciate the wonders of the breed. According to the American Kennel Club’s rankings, the Saluki is today the 123rd most popular breed in the U.S. out of the 190 breeds currently recognized by the AKC. Labrador Retrievers are number one (of course), followed by German Shepherds and Golden Retrievers in second and third place. Smooth Fox Terriers in 122nd place, and Boerboels in 124th place, immediately precede and follow Salukis in terms of popularity. Bringing up the rear in the AKC’s rankings are Sloughis (considered a sighthound like Salukis) in 188th place, English Foxhounds in 189th place, and last and certainly not least in terms of body weight, in 190th place, the Norwegian Lundehund. My Parsons Jack Russell Terrier Polly, who’s been watching me write this article, suspicion written all over her face, asks me to point out to AXP readers that her breed comes in four spots ahead of Salukis in 119th place. “So there!” she woofs. She’s also Number One, she wishes to add, in the Turner household.

You folks over there on the other side of the pond in the U.K. have things figured out with the Saluki. The Saluki comes in 94th place on the list of the 100 most popular breeds in Fair Albion, one spot ahead of the Gordon Setter and one spot behind the Lakeland Terrier. “What about Parson Jack Russel Terriers?” Polly asks. There’s good news on that front. Her breed comes in at #47, one place ahead of the Maltese and one behind something called the Patterdale—a breed that’s not even recognized by the AKC.

“So, who’s Number One in the U.K.?” you’re no doubt asking yourself about now. The Labrador Retriever, that’s who.

In third place in the U.K., Polly wishes to inform you, is her close cousin, the Jack Russel Terrier. “If you combined my 47th place,” she argues, “with Cousin Jack’s 3rd place, you’d get 1st place!” I can’t argue with logic like that. I could, but I’d lose the argument.

“Why don’t we move to England?” concludes Polly. “People will appreciate me more there!”