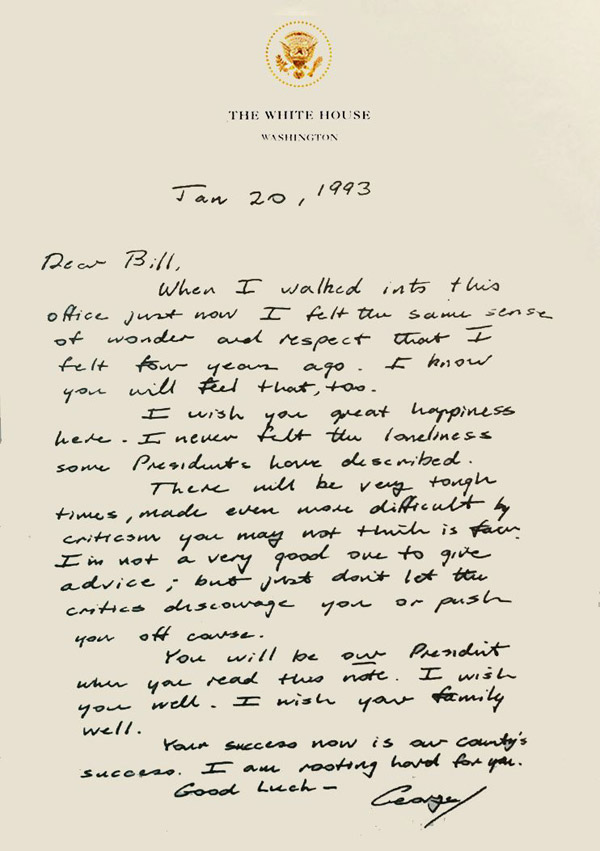 Courtesy of the George H.W. Bush Presidential Library and Museum

Aramcons the world over were greatly saddened this past week by the news of the passing of the 41st President of the United States, George H. W. Bush, at the age of 94. Those of us who were living and working in Saudi Arabia at the time remember with deep appreciation the dramatic and decisive steps President Bush took in 1990–91 during the First Gulf War as leader of the coalition that drove the forces of Saddam Hussein out of Kuwait and ended a dire existential threat to the Kingdom itself. It is with good reason that, upon hearing of his death, many people lauded his achievements while mourning the loss of the man Dick Cheney described as “the greatest living American.” Bush’s call in his inaugural address to strive to make the United States “a kinder and gentler nation” remains an inspiration to many to this day.

The son of U.S. Senator Prescott Bush, upon the outbreak of World War II, George Herbert Walker Bush refused to take refuge in his father’s wealth and fame and, instead, on his eighteenth birthday, enlisted in the U.S. Navy. As the youngest pilot in the service at the time, he flew 58 combat missions as a torpedo bomber aviator in the Pacific theater. Shot down by Japanese antiaircraft fire in 1944 on one of his missions, he was rescued from the water by an American submarine, the USS Finback. For his conspicuous bravery in action, he was awarded the Distinguished Flying Cross.

Thus began a long and distinguished career as a businessman and public servant.

In January 1945 he married Barbara Pierce, and together they had six children—George (future Governor of Texas and 43rd U.S. President), Robin (who died of leukemia at age 3), John (better known as Jeb, future Governor of Florida), Neil, Marvin, and Dorothy.

After graduating from Yale University he embarked on a successful career in the Texas oil industry. Following in his father’s footsteps, he eventually turned his attention to public service and politics. After serving two terms as a Representative to Congress from Texas, he twice ran unsuccessfully for the Senate. Later he served in a series of high-level positions, including as Ambassador to the United Nations, Chairman of the Republican National Committee, Chief of the U. S. Liaison Office in the People’s Republic of China, and Director of the Central Intelligence Agency.

In 1980 he joined Ronald Reagan on the Republican presidential ticket and subsequently served as Vice President for eight years. In 1988 he was elected as America’s 41st president and for the next four years presided over the end of the Cold War, the break-up of the Communist empire, and the fall of the Berlin Wall.

His greatest test arguably came with Iraq’s invasion of Kuwait. Undeterred by Saddam’s threats, Bush rallied the United Nations and the American people and, with the support of Congress, sent 425,000 American troops to the Middle East, where they were joined by 100,000 troops from other allied nations. I had the honor of being one of the many Aramcons living in the Kingdom at the time who showed our support of the troops by visiting them in the desert and inviting them into our homes. Those are memories I shall cherish forever. To a considerable degree, I owe them to George H. W. Bush.

After losing a contentious battle for reelection in 1992, in January 1993 the outgoing president left a gracious hand-written note to his successor, William Jefferson Clinton, on the Resolute Desk in the Oval Office. It read:

When I walked into this office just now I felt the same sense of wonder and respect that I felt four years ago. I know you will feel that, too.

I wish you great happiness here. I never felt the loneliness some Presidents have described.

There will be very tough times, made even more difficult by criticism you may not think is fair. I’m not a very good one to give advice; but just don’t let the critics discourage you or push you off course.

You will be our President when you read this note. I wish you well. I wish your family well.

Your success now is our country’s success. I am rooting hard for you.

An irreplaceable national treasure and true hero, George H. W. Bush passed away on 30 November 2018 at the age of 94. May his memory and legacy live on.