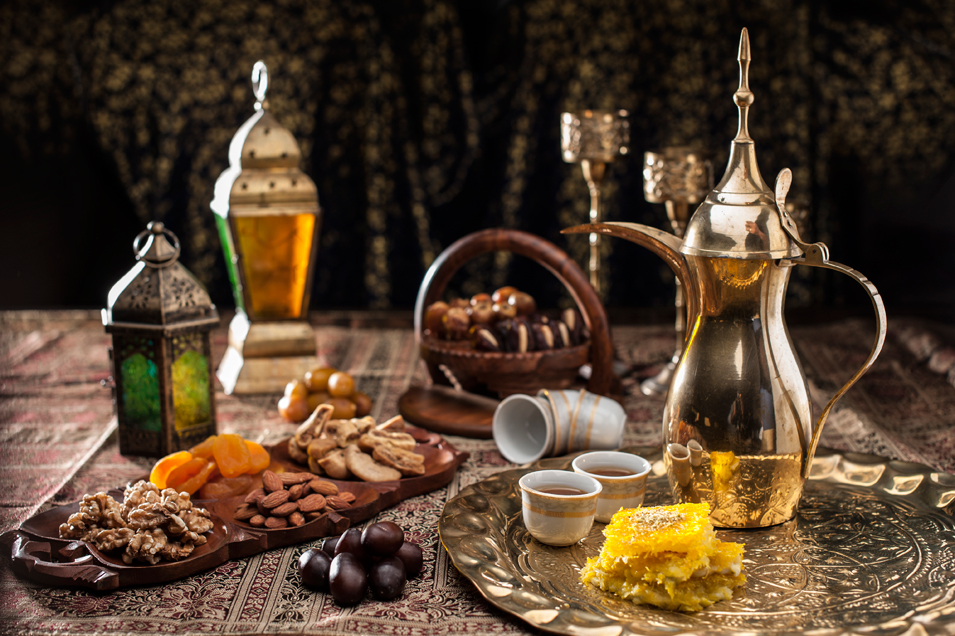 The Holy month of Ramadan is the 9th month in the Hijri calendar. Since the Islamic year is 11 days shorter than the western Gregorian calendar, Ramadan moves ‘forward’ by that amount each year in comparison to our western months, making Ramadan, quite literally, a moveable feast!

When I first arrived in Riyadh back in April 1989, Ramadan had just begun. It was very strange, the streets were devoid of cars, the only people in a grocery store were the clerks, all shops were mostly closed except for a couple of hours in the morning in the souq, when a few sleepy-eyed merchants might appear. Those fasting only worked six hours a day. If Saudis chose to take the month off from their work because of Ramadan, they could do so and still be paid full salary.

Day in and day out for the whole month, the city was almost a ghost town. But, in the last hour before sunset, there would be a flurry of activity. Husbands were sent forth for a last-minute bag of sugar, or more phyllo pastry needed for the sweets that always surrounded Ramadan festivities. Driving would be manic as the race would be on with everyone in a hurry to get home for Iftar to be with the family in time to break the fast.

I miss Ramadan. Not because of fasting, since I never fasted, but for the hustle and bustle associated with the month, and the bond of friendships that seemed more important than at any other time of year. I miss the endless invitations to homes for Iftar, even though my hosts knew I was not fasting. They wanted me to experience the occasion and the meaning of Ramadan. Ramadan is about being aware of the plight of the poor, who do not know where their next meal comes from. It is about the suffering of others who are less well off. It is about compassion. Aside from the mosques, the local population would pay to ensure there was adequate food for fasting expatriate workers during Ramadan and nobody was excluded.

The fast is broken at sunset by drinking water or some laban – a yogurt type drink along with eating a couple of dates and possibly drinking a finjan of Arabic coffee. Your host then disappears briefly to say prayers before the serious eating begins.

It never ceases to amaze me how many dishes are prepared over the course of the afternoon for that evening’s Iftar. One of my all-time favorites served during the Holy month is Sharbat Al Addas, a lentil soup laced with cumin and just a dash of lemon squeezed on top.

Sambuseks, an assortment of little triangular shaped parcels which are deep fried and stuffed with a soft herby creamy cheese, or with ground beef, come piping hot. Light and airy to both the touch and palette, they too are delicious. Often, when I was stuck in traffic on my way home, people on the street would suddenly approach the car insisting that my driver and I share sambusek from a newspaper wrapping stuck through the open car window!

The Iftar table would also be full of salads and mezze, like the well-known tabbouleh and fatoush, dolmeh those delicious grape leaves rolled and stuffed with rice and herbs and sometimes ground lamb. Then the traditional hummus, babaghanoush or, mutabel. Jarish is often featured depending on where you live geographically. It is made from ground wheat, lamb, and vegetables. Each region has its own favorite dishes served during Iftar. Foul, a dish of fava beans with onion, cumin, and tomato is a hardy dish served with an Arabic bread known as Tamees. And, as if that is not enough, an array of sweets, Kunafah, and Umm Ali, the most loved of all along with an assortment of pastries laden with honey or rose water are also featured.

For anyone who has not experienced a Ramadan Iftar, these days all the Kingdom’s hotels offer buffet style Iftar’s with each hotel trying to outdo the next. Come with an appetite because the food is simply mouthwatering and fit for a King!

Prayers take place again after Iftar. Then about 9pm, the hustle and bustle begin with families piling into the car and heading out on the town. Others might head to the desert, lay carpets, and sit and talk, drink chai while the children run around until the small hours of the morning. More will be fervently shopping as the Ramadan sales are in full swing, no different to Christmas sales, enticing all to go home with a lighter wallet. Like Thanksgiving in the United States being one of the busiest time of years for sales, Ramadan is the season for shopping in the Arab world and the fashion industry has taken on a new meaning, offering beautifully designed thobes and galabiyas with all manner of embroidery for the occasion. Children are dressed up in their finery, there is an air of happiness that pervades society and shops are open till 1:00am or later. The cities and towns become alive with activity. In many respects, it resembles the Christmas holiday period in the west when everyone is madly shopping for gifts for family and friends, generally without the late-night openings beyond 11:00pm.

When the day of Eid al Fitr finally arrives, festivities abound, the fast is over and special Eid foods are served. The holiday takes place over three days, spent with the immediate family and visiting extended family and friends. The Eid al Fitr celebration is about being thankful for what you have in life. New clothes are worn for the holiday and children and adults alike gift each other. During the Eid celebration, charity, known as Sadaqah Al Fitr in the form of food is provided to all those who are needy.

As Ramadan comes to a close, those with access to sweet shops in the Kingdom owe it to themselves to seek out some freshly made Ma’amoul, a type of shortbread cookie eaten over the holiday celebration. They are found in abundant variety, made from figs or dates, filled with almonds, pistachios, or walnuts, laden with butter, with a slight dusting of icing powder on top. Pre-packaged ma’amoul are available in grocery stores, but they are best bought fresh. Hurry before they are sold out!