The highest, coldest and wettest part of Saudi Arabia is an exquisite land where misty clouds silently wrap themselves around steep peaks, veiling biodiversity preserves concealed in remote corners. In the Kingdom’s southwest Asir region, spectacular mountain ranges roam across 100,000 square kilometers, pushing imposing peaks up to 3,000 meters above sea level and randomly scattering giant granite boulders across the landscape.

Within the region’s rich sprinkling of juniper forest, a rescue mission is underway to save one of its residents — the highly endangered Asir magpie, whose estimated numbers have dwindled to merely 130 breeding pairs. 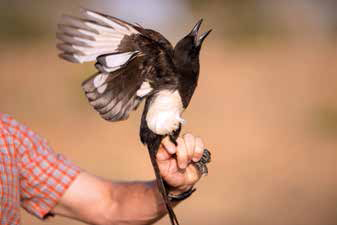 Research is needed as the explanation for the decline is as elusive as information about the bird.

As part of its commitment to preserve and protect the natural environment, Saudi Aramco is partnering with the Saudi Wildlife Authority and the Smithsonian Institution to conduct research into the magpie’s perilous status.

Found only in Saudi Arabia, the sleek black-and-white Asir magpie, renowned for its high intelligence, lives exclusively in the comfortable Asir ecosystem, where more rain falls than anywhere else in the country.

In the early summer of 2018, scientists from the Smithsonian Institution commenced a joint project with EPD to research the mystery of the magpie’s declining population.

According to EPD terrestrial ecologist Christopher Boland, the causes of the decline are not clear, but could be habitat fragmentation and lack of genetic diversity. “It’s perplexing. There is no shortage of food or nesting sites. There doesn’t appear to be any new predators or competitors in the landscape driving the magpies toward extinction,” Boland said.

“If the birds are unable to disperse from one patch of juniper to another, then they may be suffering from genetic problems, such as inbreeding. Scientific research is required to form effective conservation actions to protect this precious bird.”

In May and June, two Smithsonian scientists from the U.S. visited Asir to observe the rare birds and prepare for an initial 12-month research study. During their time, they successfully captured 12 Asir magpies, tagging the birds, obtaining measurements, and then releasing them unharmed. The study’s scientific recordings are the first known basic measurements of the bird, which has seen declining numbers over recent years and is facing a significant threat.

At 46 centimeters and weighing an average of 240 grams, the Asir magpie is a striking mid-sized bird, found only in Saudi Arabia.

It is known locally as the “Ack-Ack,” a name that is reflective of the bird’s series of charismatic calls, and its nest is a massive dome, usually built 4 to 7 meters high in a juniper or acacia tree.

Beyond this, very little is known about what the Asir magpie eats, its breeding patterns, how far it moves, the composition of its family group — and all this key information is needed for its conservation.

The first joint in-Kingdom initiative between the Smithsonian and EPD, the Asir magpie project involves collecting DNA samples from the birds and tracking their movements to better understand and mitigate the factors impacting their population. The Saudi Wildlife Authority is working closely with the research team, as well as local community volunteers.

Local communities play a significant role in the preservation of an ecosystem. During May and June, two Smithsonian scientists from the U.S. visited the Asir region to observe the rare birds and prepare for an initial 12-month research study.

Before the research team arrived in the region, volunteer birdwatchers from the surrounding mountains spent two weeks identifying the best magpie sites.

Twelve Asir magpies were successfully caught, their vital measurements recorded, tagged with a state-of-the-art tracking system, and then immediately released unharmed. The study’s scientific recordings are the first known basic measurements of the bird.

Using a leg-loop harness, each research bird is tagged with a GPS tracker, the combined weight of which is no more than 4% of the magpie’s body mass.

The birds receive one of two types of miniature trackers — one uploading lots of data from multiple pinpoint locations visited by the bird, and the other type uploading fewer locations but with data that is immediately transmitted via satellite back to the Smithsonian’s research facilities in Washington, D.C.

Smithsonian ornithologist Evan Buechley described the trackers as “pretty amazing” cutting-edge technology. “By deploying these trackers, we’ll be able to track the precise movements of magpies throughout the year,” Buechley noted.

Location fixes from the trackers are the first step toward understanding where the Asir magpie lives and where it goes.

Buechley explains the trackers will deliver three sets of key information. “First, the trackers will let us know whether the Asir magpie migrates seasonally from lower to higher ground. Second, how and when their offspring disperses from the family home. Third, we can find out what habitats they like to use,” he said.

When captured for tracking, each bird is also given its own identity with a uniquely numbered aluminum band on its right leg.

A tiny 0.5 milliliter blood sample taken from each of the 12 captured birds will be housed by the Saudi Wildlife Authority.

DNA extracted from the blood and analyzed in the lab will be used to identify the sex of each bird and assess population genetics.

Smithsonian ornithologist Alex Jahn said genetic markers are important to identify conservation issues such as inbreeding. “There can be negative consequences for a population if it is too small and close relatives are inbreeding,” Jahn said. “We like to see bird populations with high genetic variability.”

“Genetic markers help us understand if there are issues in the genetic make-up of the parent population, and potential issues with offspring.” 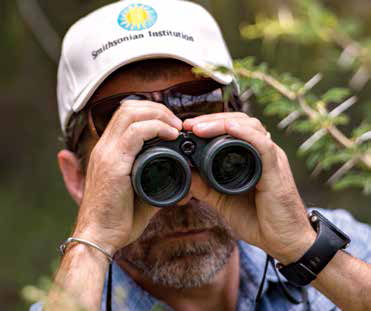 Project ornithologists keep a close eye on the Asir
magpie and its genetic markers, which are
important to identify conservation issues such as
inbreeding. The markers are measured by taking
a tiny blood sample. (Photo: Ahmad El Itani/MPD)

Already, the scientists have made a significant observational discovery from the preliminary research into the Asir magpie; it appears they live in family groups of two to four adults.

Some birds, particularly those living in arid ecosystems such as Saudi Arabia, require a family group to share the hard work of raising offspring. Several adults may be required to find enough food to raise a single brood of chicks.

Boland said the previously unknown family living arrangement was an important finding toward tailoring conservation efforts for the Asir magpie.

Based on what the 12-month initial study finds, the research team aspires to tailor a conservation plan to ensure a long-term viable population.

Protecting endangered species and preserving habitats for biodiversity is a priority for Saudi Aramco.

Omar S. Abdulhamid, EPD manager, said partnering with the Smithsonian Institution to protect the endangered Asir magpie was about more than keeping a single bird species from slipping into extinction.

“It’s just one part of our larger effort to preserve biodiversity and their habitats — in the Kingdom and abroad,” Abdulhamid said.

“As a company of scientists and engineers, we appreciate the importance of each individual component of a healthy, functioning ecosystem. By working with the Smithsonian Institution and the Saudi Wildlife Authority to reverse the decline of the Asir magpie, we’re helping preserve the balance and integrity of the Kingdom’s natural ecosystem,” he stated.

“Birds are important to the cultural heritage of Saudi Arabia, and the health of their populations is an indicator as to the health of our environment. We will use data collected in the field to create models that help us understand how a changing environment may contribute to their endangered status,” Abdulhamid added.

Saudi Arabia has been the only place I have visited that when I get up to see birds at 4 a.m., I also hear the call to prayer.

An Early Morning Call: Ornithologists Drink in the Character of the Kingdom 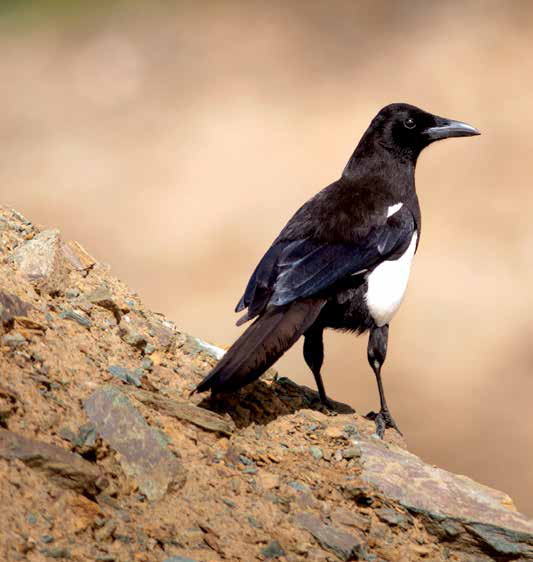 The highly endangered Asir magpie is the only
bird species to occur entirely within Saudi Arabia.
Numbers have dropped to around 130 breeding
pairs and the United States’ Smithsonian
Institution and Saudi Aramco’s Environmental
Protection Department have commenced a
preliminary research study aimed at saving
the bird. (Photo: Nader Al-Basri)

A characteristically cool summer sunrise in Saudi Arabia’s mountain region of Asir is welcomed by the distinctive call of the Asir magpie, the only bird found exclusively in the Kingdom.

Waiting among the Asir’s juniper trees are two American ornithologists, making the most of the early morning hours when the birds are most active. They’re watching for Asir magpies.

Ornithologist Evan Buechley has just trapped a mature male magpie and breathes in deeply before he carefully starts the process of recording and tagging one of these rare birds.

Stunning turquoise-tinted feathers adorn the black-and-white plumage of the magpie, which is cautiously removed from the specially designed trap to ensure no harm, and placed in a soft cotton bag for weighing.

The other ornithologist, Alex Jahn, records the weight and helps Buechley keep the bird calm by placing a hood over its head.

After recording its sex, estimated age, fat content, condition of its feathers, and measurements of its wings, tail and beak, the magpie is tagged with a petite-sized GPS tracker.

The final interruption to the magpie’s morning is a blood sample, before the bird is released back toward the climbing sun. 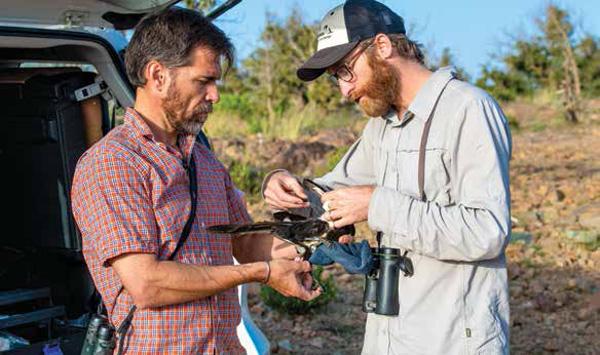 Evan Buechley (right) and Alex Jahn work to tag a
captured Asir magpie with a petite-sized GPS
tracker. The two Smithsonian ornithologists got up
at 4 a.m. daily to monitor, capture, and release Asir
magpies as part of a joint effort between the
company, the Saudi Widlife Authority, and the
Smithsonian Institution.

These ornithologists are from the Smithsonian Institute, which is collaborating with Saudi Aramco’s Environmental Protection Department (EPD) to research the mystery of why the highly endangered Asir magpie’s numbers have been reduced to approximately 130 breeding pairs.

The research is starting with a 12-month project to estimate magpie population size, density, habitat use, and distribution, and Buechley says it is an exciting privilege to come to Saudi Arabia to study a little-known species and its ecosystem.

“Saudi Arabia is a key country on one of the world’s largest migratory flight paths, where birds from Europe, Asia, and Africa congregate in large numbers. Further, the world recognizes the Asir Mountains as a unique and globally important area for biodiversity conservation,” he notes.

“The people of Saudi Arabia understand a harsh and fragile environment like no one else, and our research into the Asir magpies will assist the Kingdom’s conservation work,” Buechley adds.

With an extensive history of promoting environmental awareness and protecting ecologically sensitive areas, EPD identified the Asir magpie as a major conservation priority.

The company engenders an environmentally responsible culture by helping to preserve the balance and integrity of the Kingdom’s natural ecosystem through judicious use of natural resources.

“Saudi Arabia has been the only place I have visited that when I get up to see birds at 4 a.m., I also hear the call to prayer,” reflects Jahn.