On Top of The World: Young Aramcons Scale New Heights in Africa 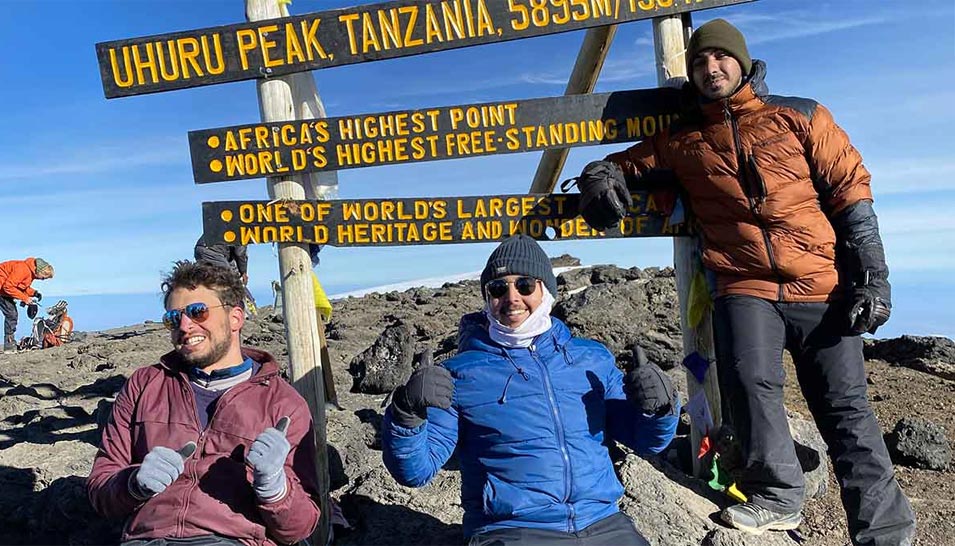 Pictured on the summit are, from left, Abdulrahman A. Boksmati, Abdulaziz S. Alghamdi, and Faisal A. Hakami. The three Aramcons celebrated their ascension of the famous peak by raising the Saudi Arabia flag. Their goal is to plan the Kingdom’s flag on the highest mountains on every continent in the world.

A trio of intrepid young Aramcons have conquered Africa’s highest mountain and the tallest freestanding mountain in the world.

The volcanic Mount Kilimanjaro in Tanzania stands at a jaw dropping 5,895 meters (19,341 feet).

Abdulrahman A. Boksmati of the Research and Development Center, Abdulaziz S. Alghamdi of the Industrial Security Support Department, and Faisal A. Hakami of the Manifa Producing Department, reached the Uhuru Peak after a grueling seven-day trek over the recent ‘Id holiday.

The three Aramcons first met in Aramco's College Degree Program for Non-Employees, and were sponsored to attend different universities across the globe.

They are now young engineers in different business lines across the company.

The climb to the highest point of Africa involved trekking through multiple climates, including a rainforest, a desert zone, and an alpine zone.

Their adventure concluded between glaciers, after hiking more than 65 kilometers and scaling more than 5,000 meters. They camped each night under the stars.

The team started the final 12-hour trek in the middle of the night of July 13, and within an impressive eight hours, successfully reached the summit of Mount Kilimanjaro.

They raised the flag of Saudi Arabia — in their mission to plant the flag on the highest mountain summits of every continent in the world.