Dhahran — Over the next week, you may see many excited new faces on the streets throughout the Saudi Aramco residential communities.

However, these folks are not newcomers; most have actually had a long connection to the company and the Kingdom. They are attending the 2019 KSA Expat Reunion as retirees or “brats” (employees’ children who were born or grew up in Saudi Aramco communities), and many will also be accompanied by other family members.

Held from March 11 to 21, this is the fourth reunion to be held in-Kingdom for global expats, with nearly 600 attending. Arriving from 20 different countries and aged between 15 and 95, the expats’ lives and experiences span almost the complete history and achievements of the company, and promise the sharing of many amazing stories from the past. Approximately 83% are returning to Saudi for the first time.

While many have already conveyed great excitement through social media at the opportunity to return, for some who retired or left the Kingdom as long ago as the 1960s or 1970s, the changes they will encounter could be quite overwhelming! 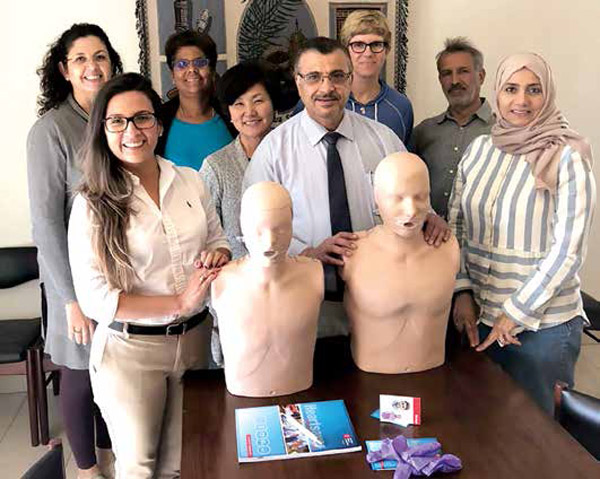 Thirty-two reunion volunteers, including the group shown above, have received first aid and CPR training through John Hopkins Aramco Healthcare in preparation for the arrival of our guests. These volunteers will be leading trips, coordinating events, and offering hospitality at the Reunion House.

Connection to the Kingdom

This is also the fourth KSA Expat Reunion to be championed and chaired by Ali M. Baluchi, a retired member of management. Baluchi first attended a reunion event in the United States in 1958, and as the years passed, he noticed a growing interest among expatriate retirees to return to Saudi Arabia to visit. He was genuinely touched that so many would still, often many years later, feel a connection to the Kingdom deep enough to call it “home.”

In 1998, he began gathering support for such a visit — lobbying not only the company, but also many local business leaders and government officials.

The result was the first in-Kingdom Expat Reunion, held in the spring of 2000, when 300 grateful retirees and their families returned to Dhahran. In a speech to welcome them back to their desert “home,” Abdallah S. Jum’ah, then Saudi Aramco president and CEO, officially recognized “how deeply roots can go in the span of one’s career.”

The event was hugely successful — a testament to the hard work of all those involved.

Nine years later, in March 2009, the indomitable Baluchi chaired the second KSA expatriate reunion. With a stronger support team, expanded program, and they welcomed 500 retirees, brats, and their families. Baluchi’s guiding principle, then as now, was to ensure that the visitors find or rediscover those things most meaningful to them about Saudi Arabia, bearing in mind the context of a dynamically changing company and Kingdom.

Khalid A. Al-Falih, then the company’s president and CEO, drew attention to the many developments the visitors observed around them and said these were a fitting legacy of their many years of service.

In 2019, the retirees, brats, and their families are visiting a Kingdom in the midst of momentous economic and social progress. Once more, Baluchi has brought together a dynamic reunion planning team of Saudi and expat community members to explore the opportunities offered by these developments. 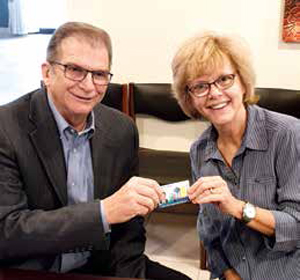 Steve Guyon, son of 1940s Saudi Aramco driller
Raymond “Tex” Guyon, was the first “brat” to
receive his Reunion ID card from administrator
Carol Moss. He is looking forward to sharing the
reunion experience with his mother Johnnie
(aged 95) and brother, Chuck. Guyon first came
to Saudi Aramco as a six-week-old baby and
grew up in the company communities. He no
lives and works in Bahrain.

The result is that more than 100 volunteers are currently helping run a busy program of more than 90 trips, events, and activities that will highlight the best on offer in the Kingdom. As the health, safety, and comfort of the guests is paramount, training for the volunteers has included CPR and first aid, fire safety, and how to lead trips and tours.

Some of the more local events will also be open to the wider community to enjoy, and are offered in partnership with various self-directed groups. These include an art show at the Dhahran Art Gallery, a quilt show, the “Sandstock” music festival, and the Saudi Aramco Employees Association’s “Dinner under the Stars.”

Community members can also enjoy a dinner show with the Dhahran Big Band, a pageant of traditional Saudi weddings, and two mall days. Ticket information is available through Community Services announcements and posters.

A highlight for all reunion guests will be a visit to the King Abdulaziz Center for World Culture (Ithra), and the visitors will also enjoy attending various events of the upcoming Eastern Province Festival.

Baluchi’s greatest desire is for the returning Aramcons and their families to experience a personal and warm welcome while marvelling at how the Kingdom has grown and changed — from observing the roles of women in the workplace to the expansion of tourism and world quality entertainment.

He hopes that while they enjoy reconnecting with their past, the visitors will leave with an even deeper affection for Saudi and its people, as well as a positive view of the dynamic future ahead for the Kingdom.

For further information or for help arranging to meet up with a returning previous colleague or friend, contact the reunion team at [email protected].

Thirty-two reunion volunteers have received first aid and CPR training through John Hopkins Aramco Healthcare (JHAH) in preparation for the arrival of our guests. These volunteers will be leading trips, coordinating events, and offering hospitality at the Reunion House.