I knew my grandfather Milton after he retired in 1960 until his death in 1970. I fantasize about the questions I would ask him now. Sadly, I didn’t really understand the breadth of his distinguished career until 2013.

In 2013, upon writing a best-selling business book titled, Disney U, I was invited on speaking tour to Bahrain, Kuwait, and the UAE. The day before my wife, Pam, and I left for this adventure, my 85-year-old father (who lived in Bahrain with his parents from 1937-1940) pulled out of the attic boxes of photos, letters, and articles, spreading them out on numerous tables and said ...

“You probably should understand more about your grandfather before you arrive in Bahrain”. 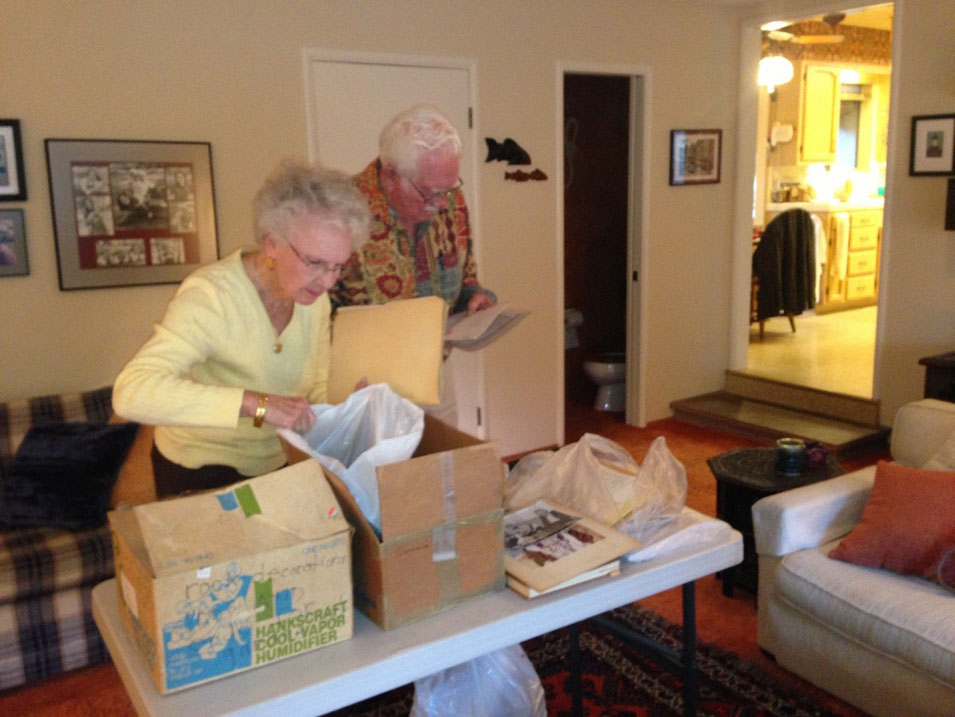 My parents and some of the boxes.

Clueless about Milton’s legacy, I was now touching:

Growing up on Persian carpets, surrounded by swords, Arabic coffee pitchers, and the beautiful smell of oudh, how could I have not known more ... sooner?

Quickly, Pam and I chose a few photos and faxed them to our event planner in the Middle East as well as to the marketing website team for Bapco (see photos below). We flew to Bahrain understanding little of my grandfather’s backstory, job titles, accomplishments, or friendships. We hoped for nothing more than receiving a tour of the refinery upon arrival. 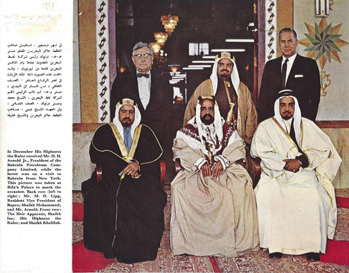 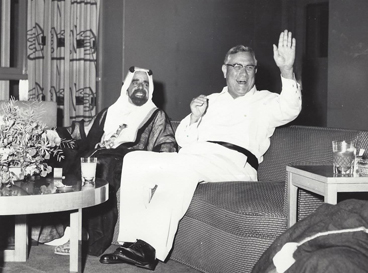 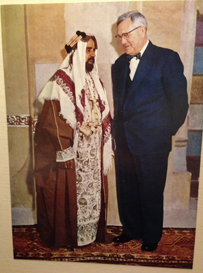 Upon arrival in Manama, Bahrain, we were shocked to find in the morning newspaper an article announcing the arrival of “Milton Lipp’s grandson” (see photos below). Not only would we have a tour of the refinery, but we were greeted by the leadership team of Bapco on their holiday weekend, plus a team of photographers recording every step of our visit. The ensuing full day spent together would eventually lead to many surprises. 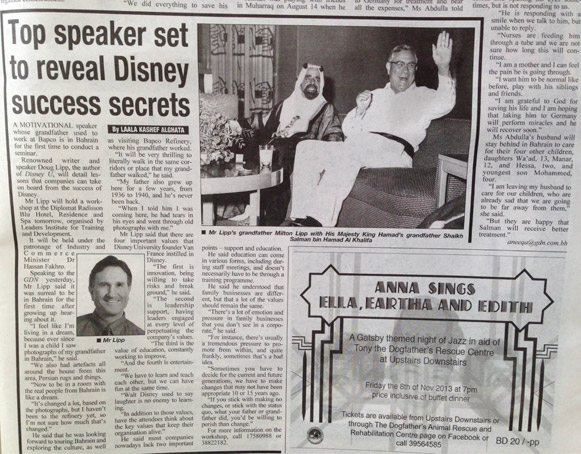 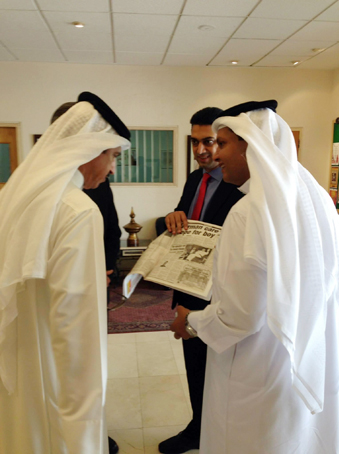 The extent of our naïveté regarding Milton’s history is emphasized with the following two surprises: First, after our unexpected meet-and-greet of the Bapco entourage, including the Chairman of the Board and top leadership and marketing team, we visited the Dar An-Naft Oil Museum on Bapco property. Situated next to Bahrain’s first oil well, (a.k.a. the “Well of Hope,” ca. 1932) this museum explores the transformation of Bahrain from “pearl state” to “oil state.”

As we strolled through the chronological history of oil discovery in the Middle East, I was genuinely stunned to see a photo of my grandfather with the Ruler, H.R.H. Shaikh Salman bin Hamad Al Khalifa, casually sitting in a meeting room. I froze in my tracks, tears filled my eyes and I said quizically:

“There is a photo of my grandfather in your museum … ?”

... all the while I heard hundreds of camera clicks capturing the moment. 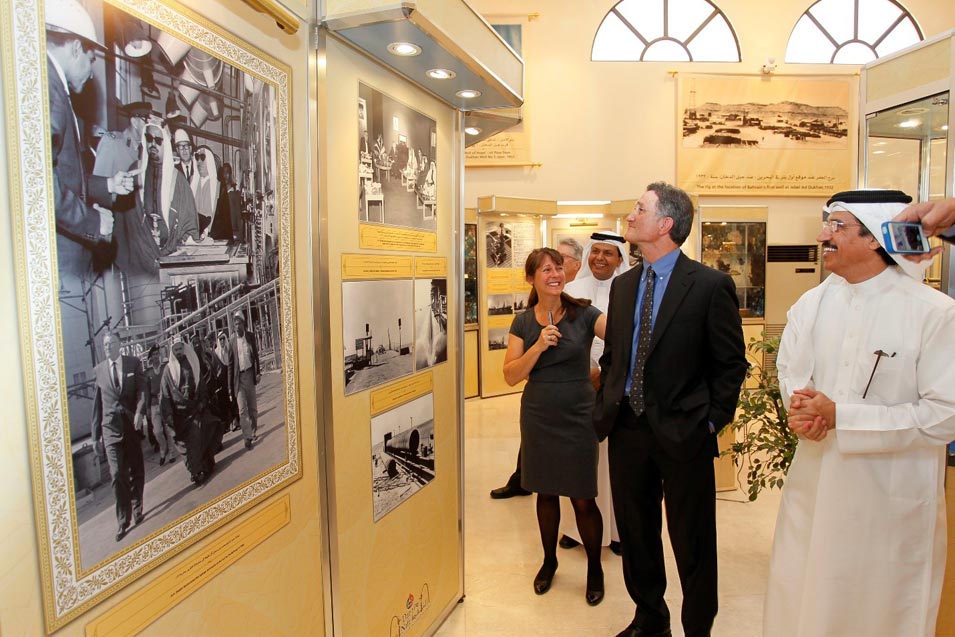 The Bapco entourage knew what I didn’t know! In the above photo, you can see the emotion on my face, with Pam smiling and trying to make the most of a very confusing (and wonderful!) moment.

Outside of the Museum, we visited the “Well of Hope,” the very first area to strike oil in Bahrain in 1932. It is called this because they struck oil on their first try. 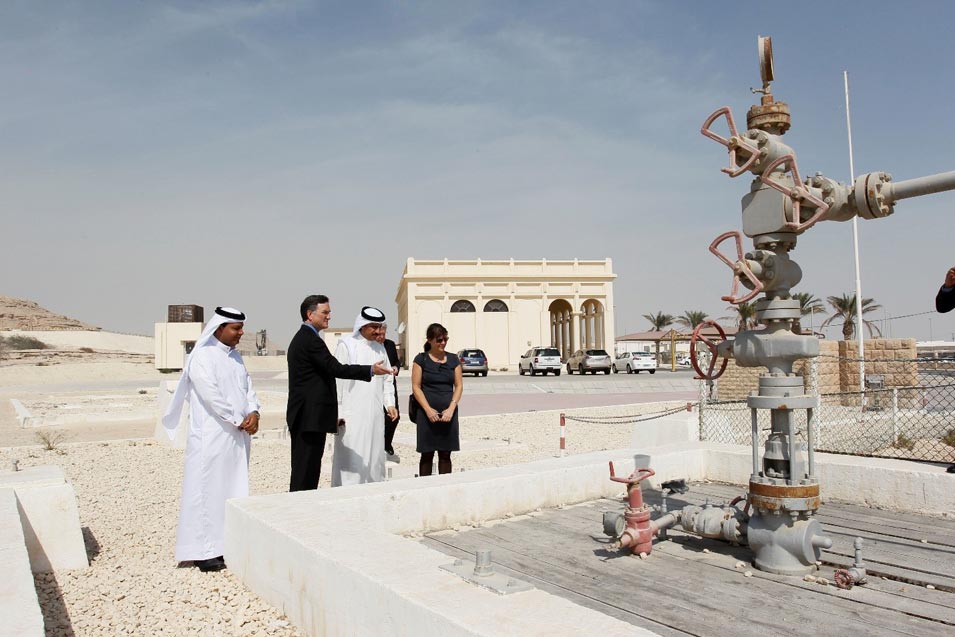 We next visit the home in Awali in which Milton, my grandmother, and my father Gordon lived. The home is now much more opulent than what it had been in the 1930’s! After this tour, we then went to a private lunch. Our heads spinning with new information and emotions, our luncheon conversation with the Bapco executives was a blur. Unbeknownst to us, we were about to be bombarded with even more surprises! 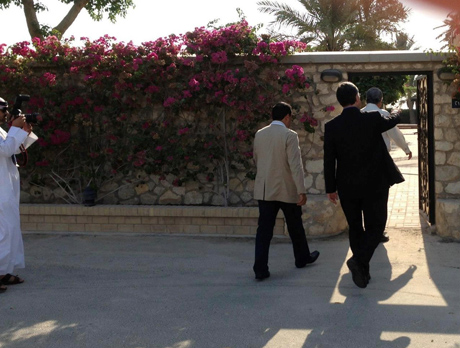 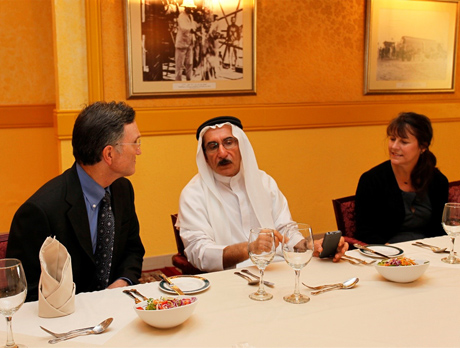 Bapco’s Chairman of the Board, Adel Al Moayyed at the luncheon.

The second surprise during which I learned more about my grandfather’s legacy was during our after-lunch tour. We were driven to the heavily guarded refinery property. After learning much about the oil refining process, and seeing one of the original refinery structures, we were told the next stop on the tour was “The Boardroom”. This seemed odd to us. What could be interesting about a meeting room?

Again, the Bapco team watched us learn. As we entered this typical board room, replete with large table and many chairs, we weren’t initially impressed. Yet, as we scanned the walls, a large display attracted our attention; the framed chronology of Bapco’s Chairmen of the Board. The display contained photographs of each Chairman, plus years served. Within this, we saw yet another photo of Milton, displayed as their 4th Chairman. Now it was all clear to us ... the family photos, Bapco’s warm and friendly reception, plus their intense curiosity about Milton’s archives and his full career (a summary of the highlights of Milton's career can be found below.)

That moment in the boardroom, combined with the tour, and everything else we had experienced that morning, led Pam and me to make a promise to the Bapco team: Upon return home, we would thoroughly study Milton’s collection of correspondence, photographs, diaries and archives from his career in Bahrain … and ensure their return to their rightful home in the Kingdom. 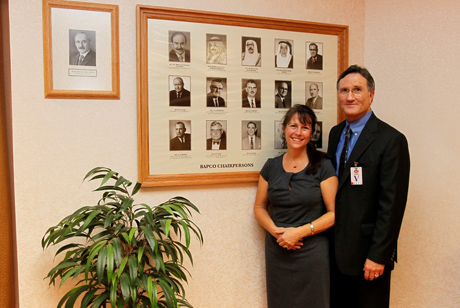 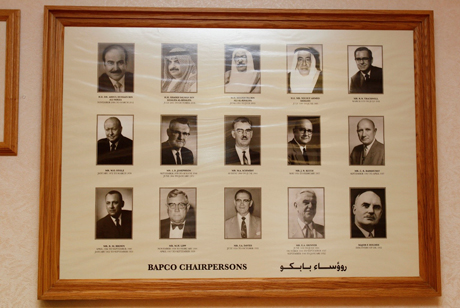 This story of our original journey is summarized in this video, created voluntarily by a videographer intrigued with Milton’s and our journey https://youtu.be/En050fllMkk. You can also read the Sacramento Bee article shared upon our return: https://www.sacbee.com/news/business/biz-columns-blogs/cathie-anderson/article2588125.html.

In part 2 of 3, we will share the story of our work with Chevron to organize and digitize the boxes of archival material. We will also share of our return visit to Bahrain, six months after this initial trip, when we donated the Milton H. Lipp collection to Bapco.

Finally, in part 3, we will share the story of our third and fourth visits to Bahrain to finalize our dream of making a public exhibit of the Milton H. Lipp Collection at the National Museum of Bahrain.

But for now, you can enjoy seeing this exhibit virtually while we write the rest of this fabulous journey.

In closing, let’s circle back to the primary reason Pam and I went to Bahrain; to conduct the Disney U leadership and service training seminar! We had over 800 attend and, as a fun surprise, the emcee included in his introduction of me the many photos we had sent. This created yet one more (yes, another!) incredible “Bahraini Moment” for us. During one of the training breaks, a very kind woman approached Pam and shared that her grandfather was in one of the photos shown by the emcee. Pam asked her, “are you a member of the royal family?” When she responded “yes,” Pam quickly organized a photo of her and me on stage with that photo in the background. As you can see, we are each pointing to our respective grandfathers. We later gave her one of our original photos of her grandfather as a gift! We have remained friends with her over the years; she hosting us for a tour of her family museum on Royal Palace grounds, and then we gave her a tour of The Walt Disney Family Museum in San Francisco. 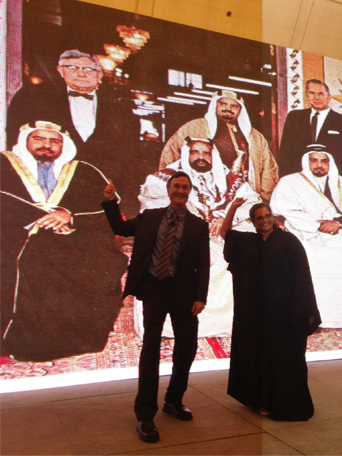 Us pointing to our grandfathers. 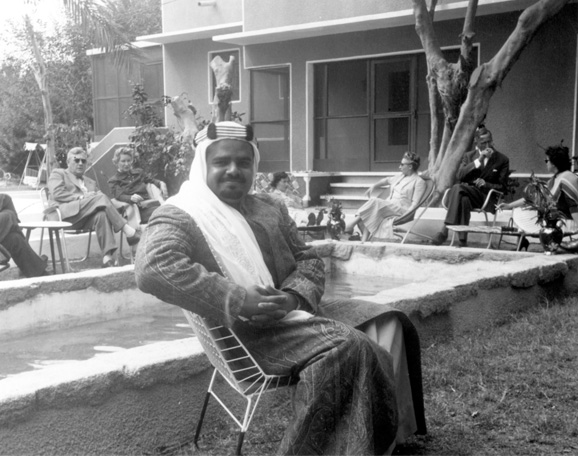 A photo we gave the Shaikah of her grandfather (taken ca. 1959).

Below are photos from the seminar in Manama, Bahrain: 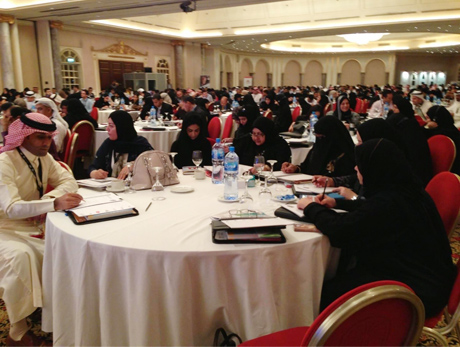 Seminar attended by over 800. 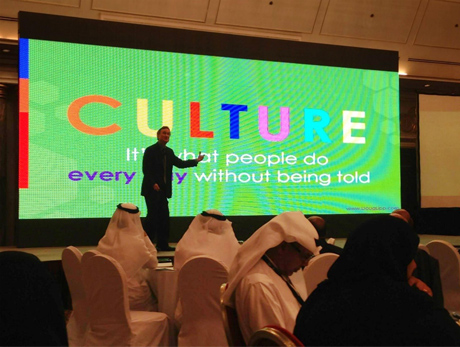 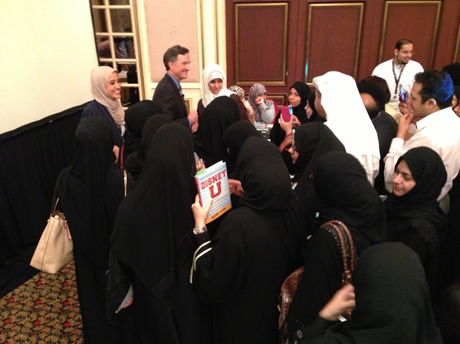 Book-signing was especially popular with the women in attendance. 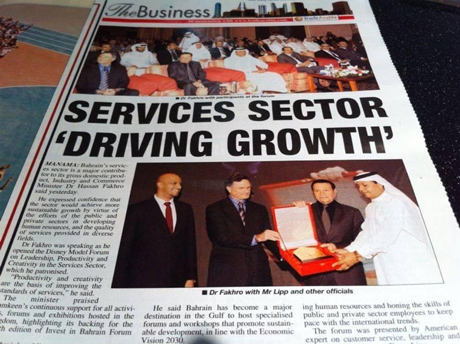 Article in the paper about the seminar.

Some samples of photos in the collection: 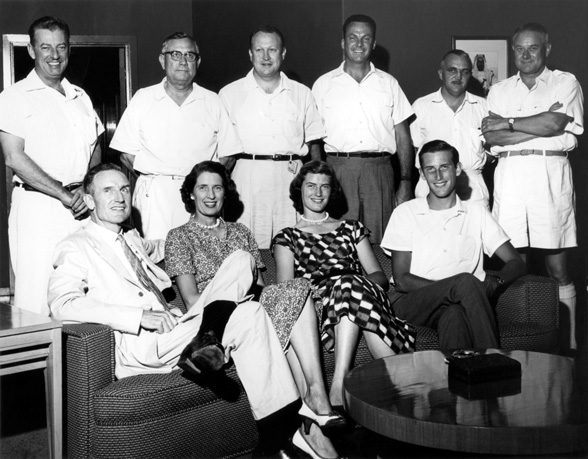 Rockefeller Family visiting Bahrain (between 1957 and 1960). 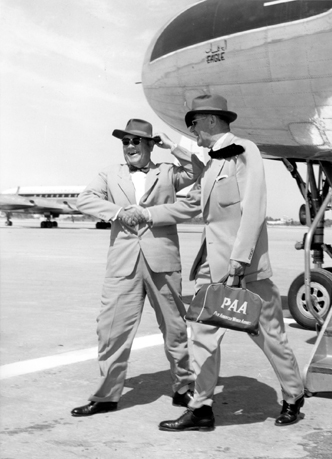 Milton Lipp welcoming to Bahrain Fred A. Davies, ARAMCO CEO and Chairman of the Board, ca., 1959.

Aramcons Walt and Linda Owens are friends of Doug and Pam Lipp and put them in touch with Aramco ExPats knowing the history of Milton H. Lipp, CBE as well as the Bahrain exhibit would be of interest to Aramco ExPats readers.