Saudi Arabia is ideal for microalgae production with its extensive, unique sabkha (salt flat) formations along the Arabian Gulf. 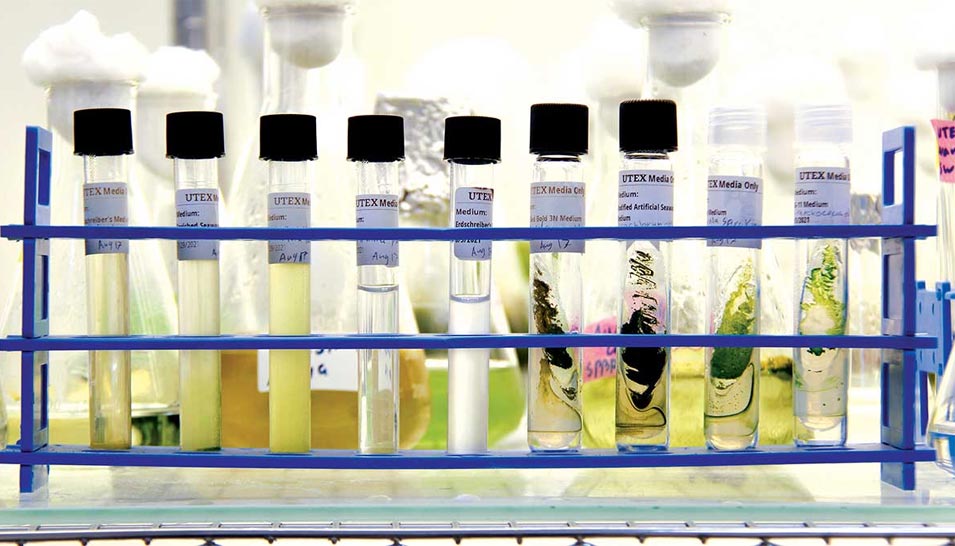 Aramco is currently exploring in various applications for microalgae within the company and the Kingdom, as it offers a nature-based solution that can potentially conribute to solving global challenges.

A tiny plant may offer a clue to help solve global challenges. The Green Energy Program (GEP), led by Aramco’s Environmental Protection is a corporate initiative developed to enhance the company’s efforts toward decarbonization, sustainability, and the circular carbon economy.

The GEP is leading the company on an expedition to promote nature-based solutions, such as planting millions of mangroves, and exploring a wide range of cutting-edge technologies, such as drone plantation. As part of these efforts, Aramco is currently exploring in various applications for microalgae within the company and the Kingdom. 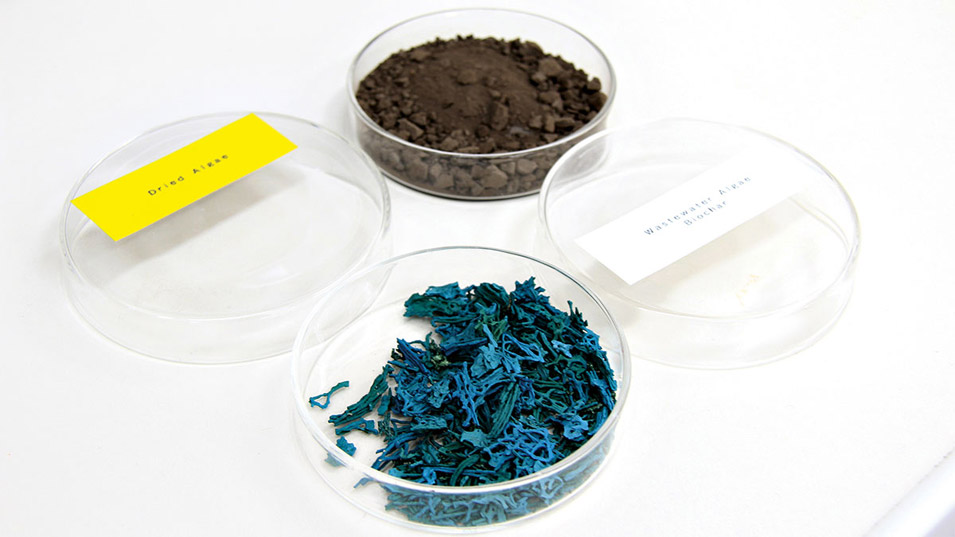 Microalgae are among the most efficient plants when it comes to photosynthesis because they do not have the complex tissue structure of a normal multicellular plant, which means microalgae can essentially produce more energy within a limited space and with less resources.

Moreover, microalgae can also be grown in wastewater and/or seawater, depending on the species. When growing in wastewater, algae acts as a biological remediation agent, removing nutrients from the water. 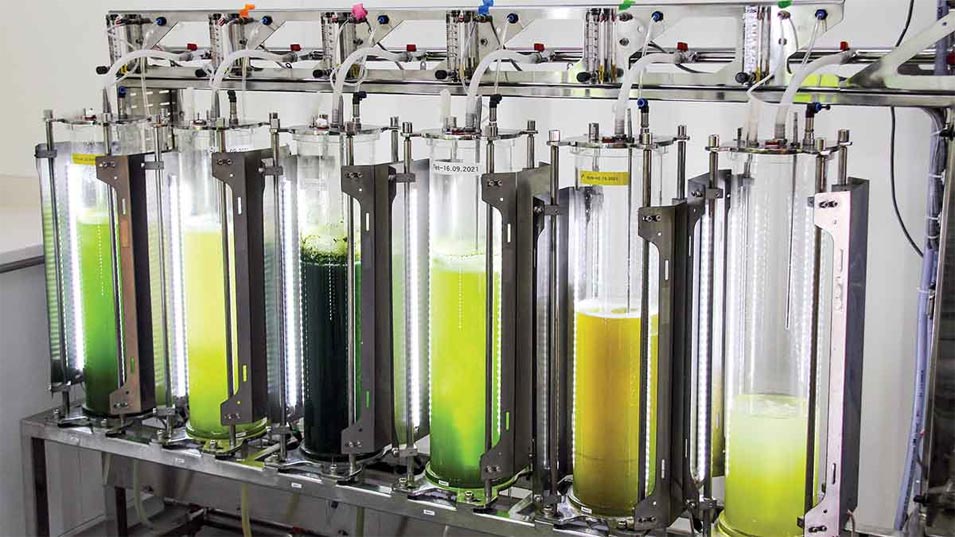 For example, microalgae could potentially help purify community wastewater. Similarly, industrial emissions such as carbon dioxide (CO2) and nitrogen oxide (NOx) can be utilized to promote the production of algae within the wastewater ponds. Bubbling these emissions within the algae production ponds increases algae production, and the algae efficiently sequesters the additional CO2 via photosynthesis, and uses the NOx as a means of fertilization.

Through the photosynthesis process, algae efficiently converts sunlight, CO2, water, and the available nutrients in the wastewater into a carbohydrate and protein rich biomass and fresh oxygen, which is then released back into the atmosphere.

The resulting biomass can then be converted into many useful products such as biofuel, animal feed, and pharmaceuticals. Interestingly, marine-based microalgae are responsible for the production of 70% of the Earth’s oxygen. Indeed, much of the world’s oil and gas resources are a result of generations of microalgae productivity within shallow seas millions of years ago. 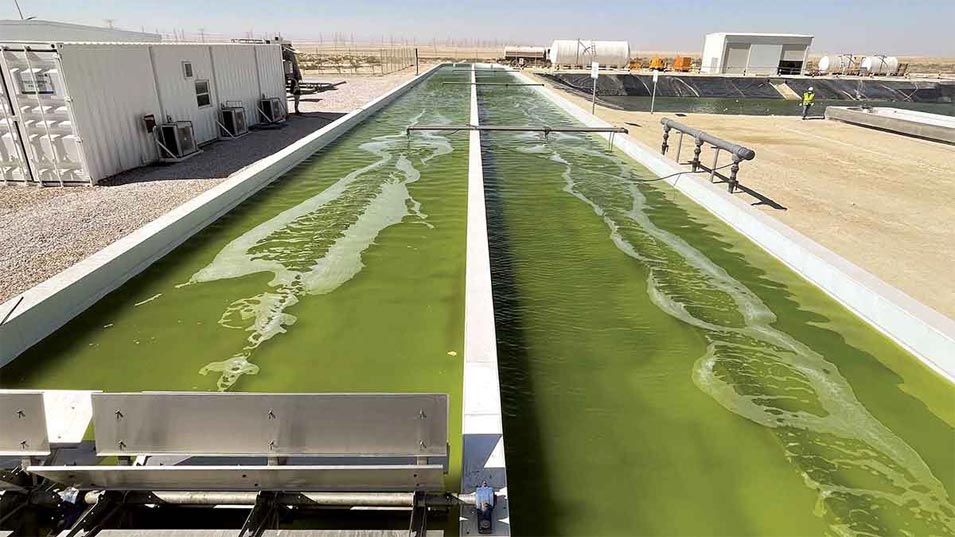 Aramco is exploring various applications for microalgae. And Saudi Arabia is ideal for microalgae production with its extensive, unique sabkha (salt flat) formations along the Arabian Gulf.

Sabkhas can be easily converted to saline algae production ponds. These same sabkha areas are also in close proximity to many of Aramco’s industrial facilities, meaning that emissions can be utilized to enrich the algae ponds, increasing the potential for productivity and in turn help reduce company emissions. Another advantage is Saudi Arabia’s climate, which is warm and sunny throughout the year, maximizing algae productivity.

In addition, Aramco has the largest seawater injection facility in the world along the Arabian Gulf at Qurrayyah, with pipeline networks extending throughout sabkha formations deep into the desert. The company also possesses existing refining infrastructure that can process and blend the algae biocrude with the company’s crude oil with minimal or no modifications. 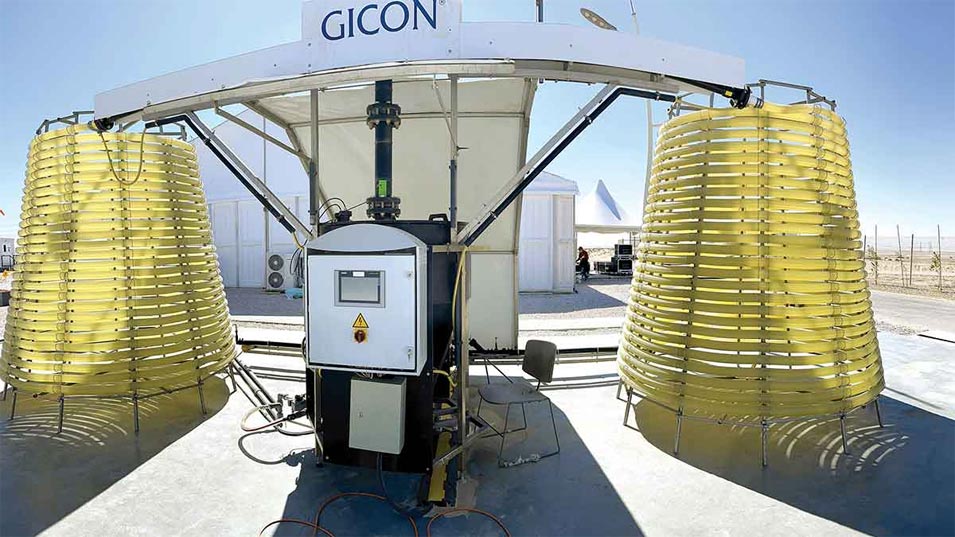 Recognizing the opportunity algae brings to the company and Saudi Arabia, an execution plan for an algae workstream was established as part of the corporate GEP in 2019. The first Microalgae Pilot Testing Facility was commissioned in close proximity to the Qurayyah Sea Water Injection Plant. The objective of this facility is to demonstrate the potential of developing a new “green” low energy intensity algae-based biofuel for Aramco as well as evaluating useful products for algae biomass, such as animal feed. The Pilot Facility has been evaluating the annual variations in growth (productivity) and CO2 sequestration capability of different species of native microalgae, both in wastewater and seawater.

In 2021, the Microalgae Pilot Facility succeeded in producing the very first batch of Aramco green biocrude. To ensure ongoing success, Aramco is collaborating with specialist organizations to optimize CO2 sequestration and algae cultivation and advance algae-based product development in the Downstream and refining process.