Early February saw the inauguration of the Abu Sa’Fah field 55 years ago. 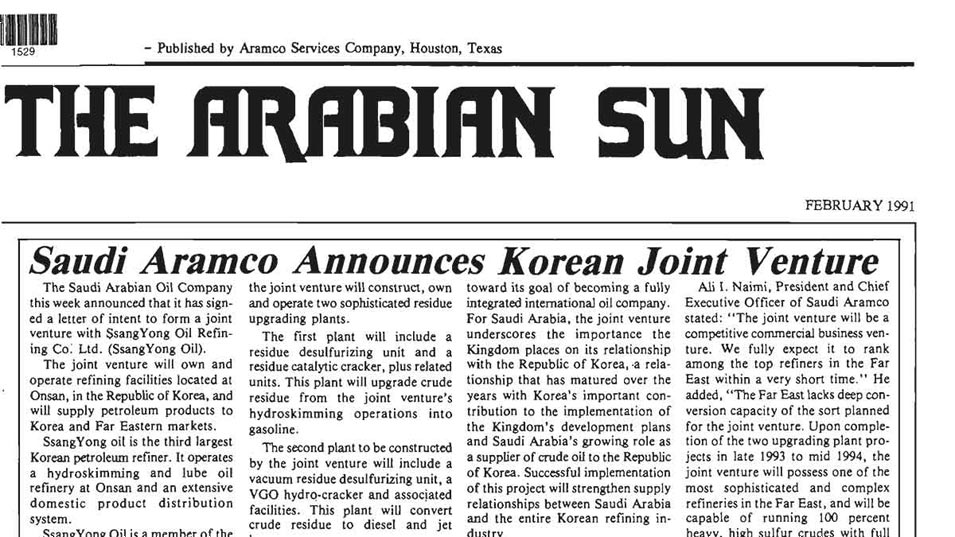 February has always been a busy month at Aramco. Whether that is recognizing some of the bests of the previous year or launching new enterprises or new construction projects, the cool breezes of winter spurring us into action.

Ras Tanura turned out en masse on Wednesday to receive the T.V. Stapleton Accident prevention Trophy for their excellent safety record in 1950. Mr. George Ehrgott, Safety Engineer, introduced Mr. T.V. Stapleton to the gathering by reminding them that in 1948, Mr. Stapleton offered the first Safety award and had spark-plugged the yearly contests.

In presenting the Trophy to Ras Tanura, Mr. Stapleton said: Nothing is more important to the Company than Safety. As we have said before, the Company never wants to do a job unless it can be done safety.

Representatives of the Kingdom of Saudi Arabia, the Shaykhdom of Bahrain, and the Arabian American Oil Company officially inaugurated commercial production from Abu Sa'fah, a new Arabian Gulf oil field. Highlight of the ceremony at the Abu Sa'Fah GOSP in Ras Tanura was the opening of a valve marking the flow of Arabian Medium crude into production facilities at 30,000 barrels per day.

In his welcoming address, Aramco president T.C. Barger, speaking in Arabic, praised the friendly negotiations between Saudi Arabia and Bahrain and the boundary and revenue agreements that make joint production possible.

Dhahran Hills will gain 136 new families during the next six months. An Open House on Feb. 12 will display six model townhomes representing the two floor plans now available. Twenty townhomes in five buildings are scheduled for February occupancy. Additional homes will become available at the approximate rate of 20 to 24 a month providing a total of 135 units in 37 new buildings.

Dhahran Hills has been growing steadily since the first families moved into new homes there in late 1977. Today, more than 750 families and close to 700 singles call Dhahran Hills home.

The Saudi Arabian Oil Company announced that it has signed a letter of intent to form a joint venture SsangYong Oil Refining Co. Ltd. (SsangYong Oil).

The joint venture will own and operate refining facilities located Onsan in the Republic of Korea, and will supply petroleum products to Korea and the Far Eastern markets.

The artistic talents of Saudi Aramcons will be showcased at the Saudi Aramco Exhibit Feb. 1-3.

Featured in the Saudi Aramco Employees Art Gallery, which opens to the public following the third annual Retirees' Dinner, are eight people whose art, photography, and fashion designs have turned heads and drawn praise from art lovers throughout the Kingdom and abroad.