In 1982, a short stretch between late October and nearly November brought some of the worst weather the Eastern Province has ever seen. 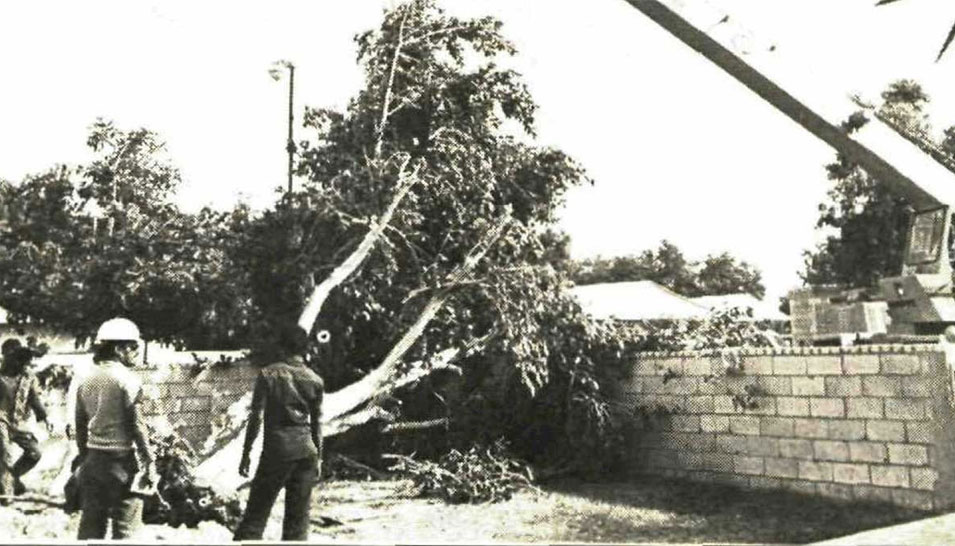 Ras Tanura cranes went on special assignment last week as teams from Residential and Recreation services worked to replant more than 150 shad trees toppled by the Oct. 28 wind storm, above. Other victims of the storm included most of the community's TV antennas and the community swimming barge, which was washed far up on the beach.

Here’s a variety of headlines over the past 70 years from the weekly publications of The Sun and Flare and The Arabian Sun. 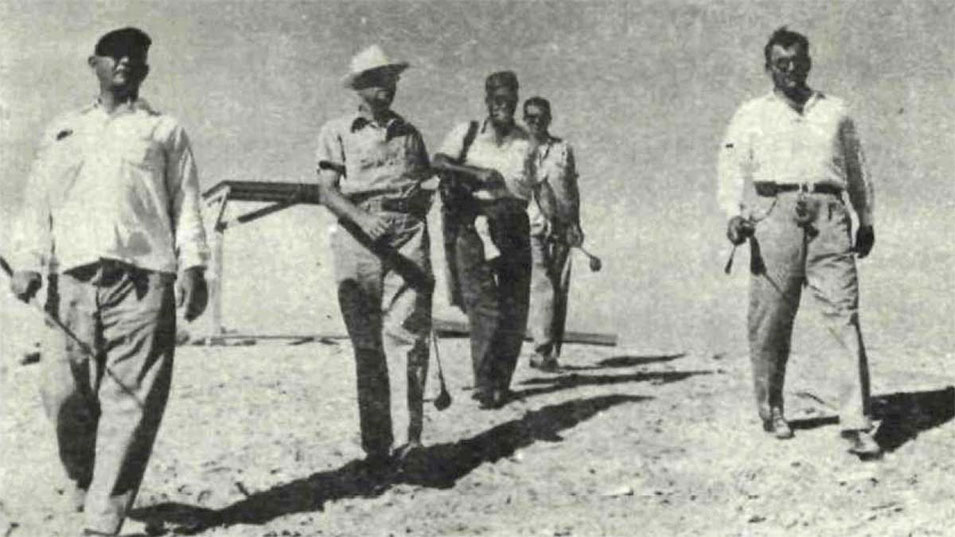 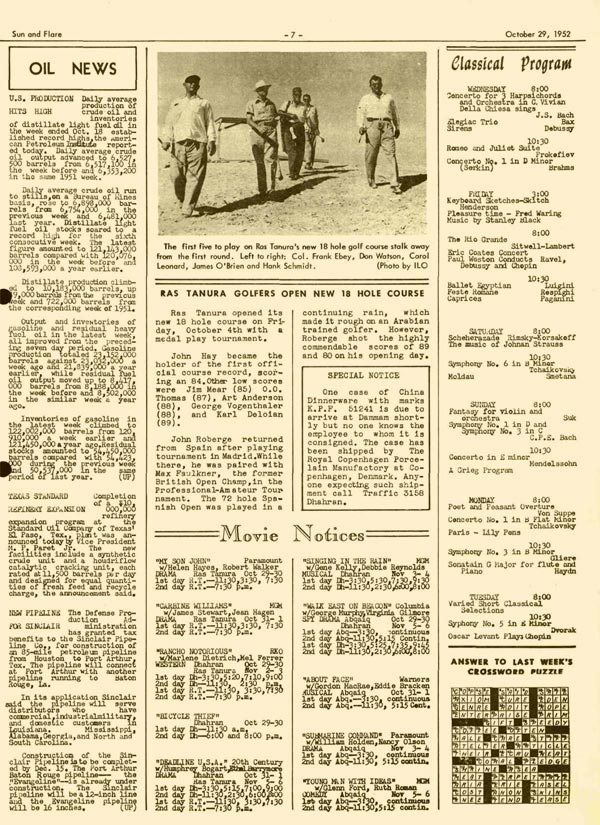 Three new oil records were established by Aramco during October.

October also registered a record quantity of 1,804,701 barrels of crude oil to be produced in a single day, surpassing the previous single-day production record of 1,773,426 barrels made last March 8.

The third record was established at the Ras Tanura Refinery, which processed 8,582,208 barrels of crude oil, breaking last August's record of 8,298,784 barrels. 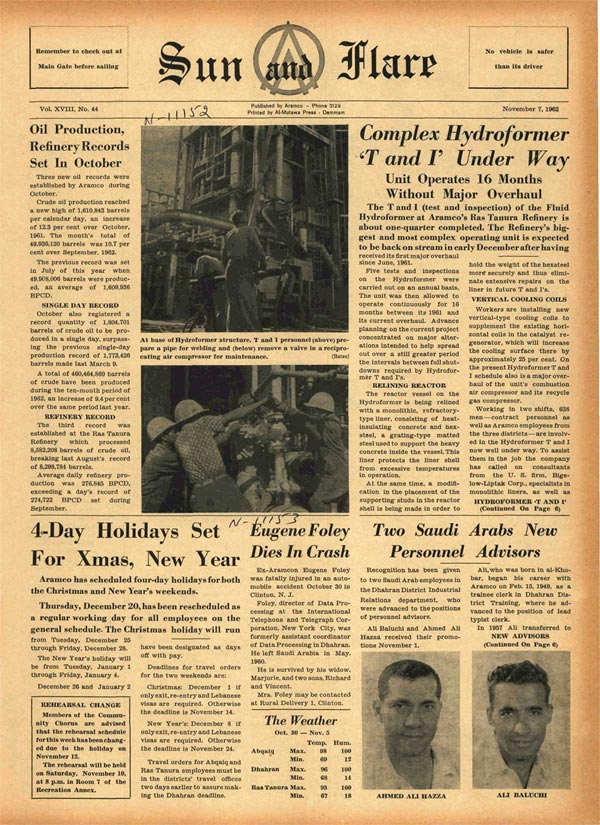 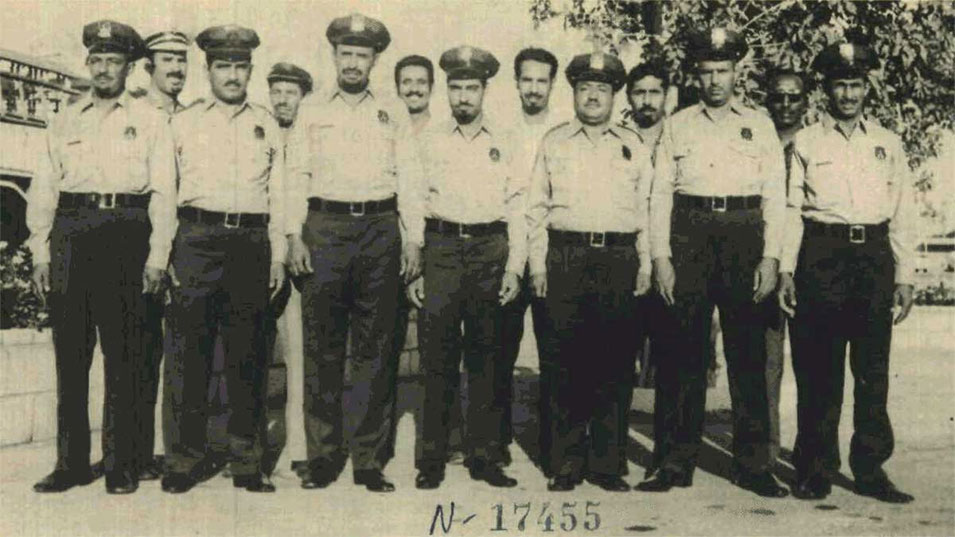 New Look at The Main Gate

Uniforms in green and khaki give a whole new look to the men who officiate at Dhahran’s Main Gate, pictured above in their “summer” uniform. In winter, they’ll add tailored jackets, also in forest green. The uniforms went into use on Wednesday, Oct. 24, and were inspected following a safety talk by K.H. Kieswetter, superintendent, Auxiliary Services Division. 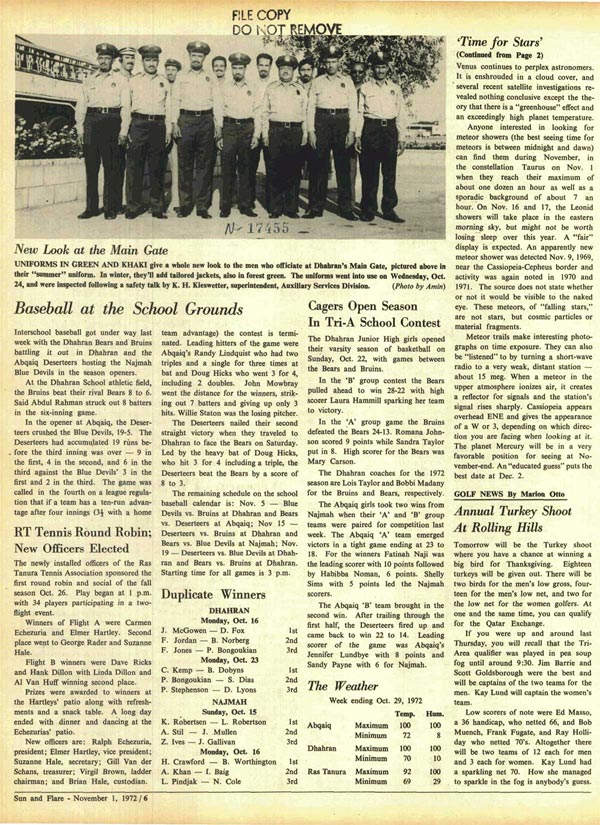 Should anyone ever decide to write a history of Eastern Province weather, the seven days from Oct. 28 to Nov. 3 (1982) would unquestionably go down as a landmark week. During that memorable period, a series of freak storms, often complete with high winds, heavy rains, and occasional hail, struck one or another of the Aramco communities every day but one, establishing at least eight weather records, and possibly more.

First to fall were the October rain records, including Dhahran’s .31 of an inch, which was the first October rainfall ever to be recorded here. Abqaiq’s total of 1.26 inches was greater than the only October rain ever before recorded in Abqaiq, .02 inch in 1951. Ras Tanura had .82 inches this October as opposed to .37 inches in 1969. And Safaniyah, which may soon be dubbed the rainy city, had 2.64 inches, a big jump up from the 1.69 inches of October 1977.

Impressive as they are, rain records weren’t the only ones established during the week. As reported in the Nov. 3 Arabian Sun, the 76 mph wind recorded in Ras Tanura on Oct. 28 tied the all-time high set in 1959. And a tornado-like win that swooped through Jubail on Nov. 3 — picking up the weather station, its huge concrete block foundation, and its accompanying 4-ton equipment van — and depositing them all on a nearby cyclone fence, may have been higher, though with the equipment in such a state of disarray, it’s a little difficult to tell.

And in eastern Dammam, hailstones as big as baseballs were reported on Nov. 3, though no hail at all fell in western Dammam. Hardest hit was the al-Hasa oasis, where so much hail fell during the course of a Nov. 1 storm that it could be seen covering the ground a day later. One resident of al-Khafji reports he still has a one-kilo hailstone in his freezer, a memento of the Oct. 28 storm. 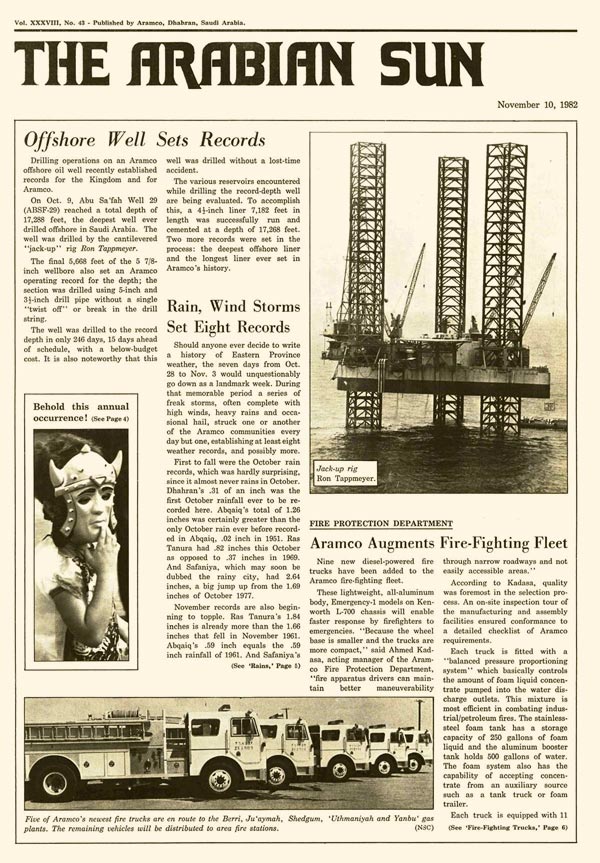 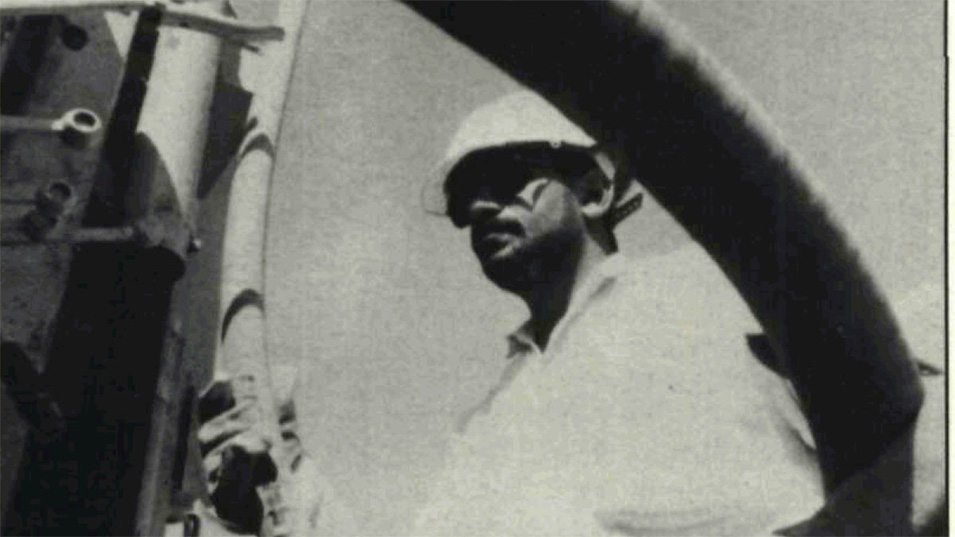 An Aramco crewman handles the kelly hose, which injects water into the drill-hole to remove cuttings.

Mounted on a Kenworth truck by the company’s Transportation Department, the rig can be scheduled for work throughout the Kingdom.

The rig serves two purposes. On one hand, it can help satisfy environmental requirements in the installation of ground water monitoring wells. And on the other hand, it can provide drilling and sampling information as a key component in soil and foundation engineering work. 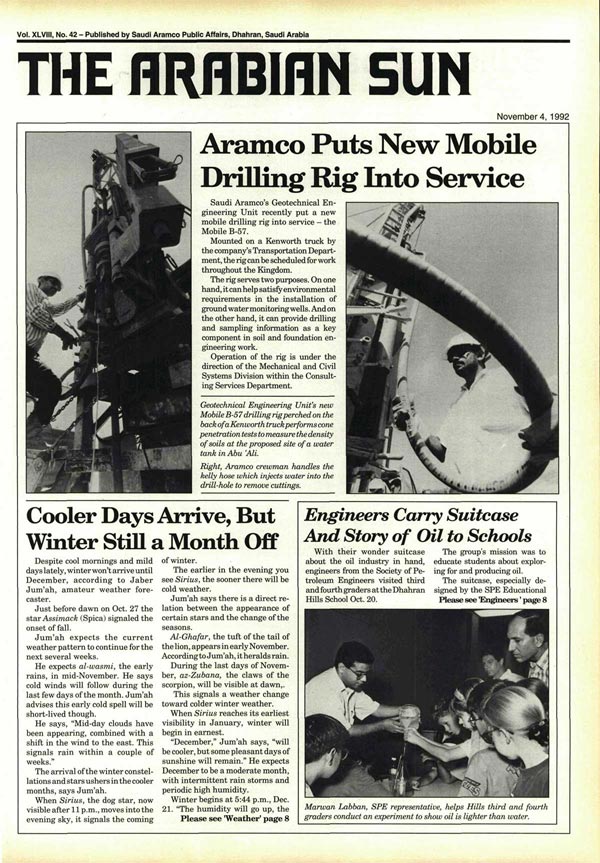 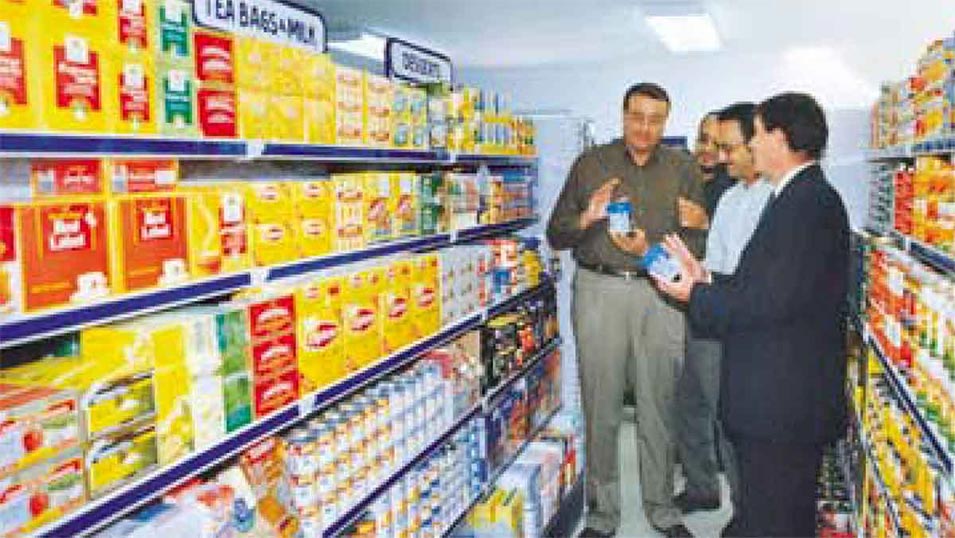 The store carries everything from basic food items to cleaning and household goods.

Nabeel A. Al-Jama', manager of CCS, said the center is part of the department’s plan to improve and develop services for Dhahran Hills residents, who live relatively far from the Commissary. 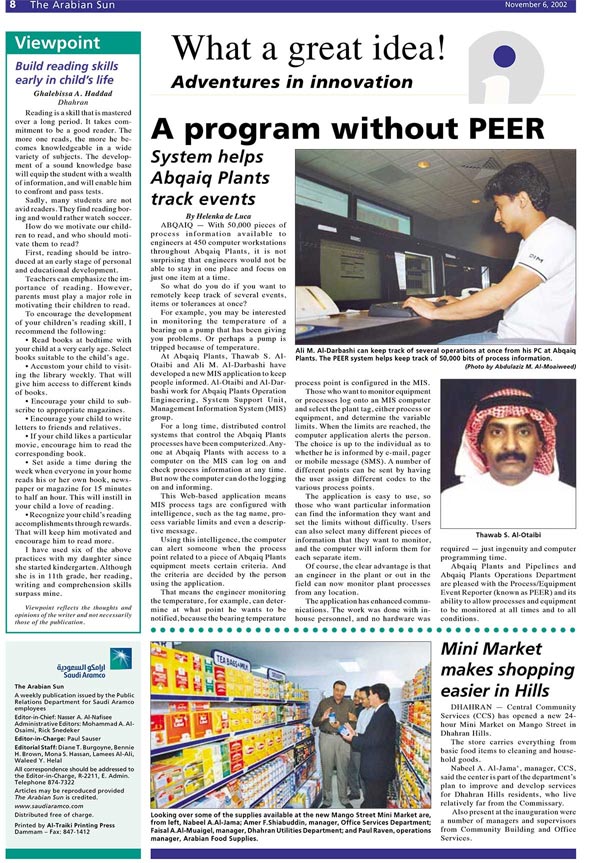