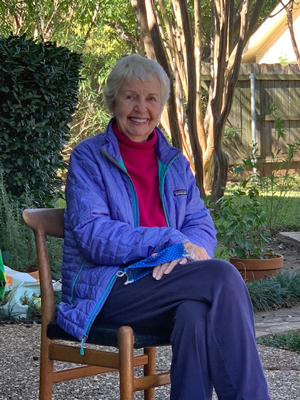 When the devastation caused by the winter storm Uri in the U.S. dominated the news in mid-February, UPA was in the midst of its Winter Shield campaign. The annual initiative to protect Palestinian refugees from the harshest stretch of winter took place in the Gaza and Hittin refugee camps in Jordan, both of which were established to accommodate Palestinians who fled the Gaza Strip during the 1967 war.

Thousands of miles away from these two refugee camps, as Uri brutally slammed Central Texas, Mary Norton, 92, of Austin, TX was learning, viscerally, how it feels to be trapped in below-freezing temperatures without electricity or heat for several days. “No matter how much I piled on the clothing and blankets, I was no match for the bitter cold that invaded my home and my bones,” she recounted. Outside temperatures dipped into the teens and single digits while the inside hung around 48 degrees. “In those awful moments, I kept thinking about the refugees in the camps who face similar situations every winter for weeks on end,” she said.

As the sixth day slid into darkness, Mary became a refugee herself, rescued by a kind friend who saw to it that she had a hot shower and a warm bed. “My gratitude was boundless, and I knew exactly how to pay it forward.” On the following day, power was restored, and Mary was able to return to her home. She decided to help with UPA’s Winter Shield’s campaign efforts on behalf of suffering families in refugee camps. “My gratitude extended to UPA and other humanitarian organizations that provide pathways for ordinary people to offer aid and comfort to vulnerable people such as the long-suffering Palestinians who, somehow, find the strength to carry on,” she continued.

“I have come to believe that giving is not a one-way street, that many benefits accrue to the giver as well,” reflected Mary. “Winston Churchill once observed ‘We make a living by what we get. We make a life by what we give.’ “Whenever I donate to a worthy cause, my spirits are lifted in the same way that babies and flowers lift my spirits and bring joy in their wake. An increased sense of purpose, connectivity, wellbeing, and even good health as endorphins are released by the very act of giving – all confirm to me that giving is good – for everyone.”

Mary Norton joined Aramco as a 'bachelorette' in 1958 and married Industrial Training Center (ITC) teacher, Howard 'Howie' Norton in 1961. Her first job was as secretary to the Producer of Aramco TV, a post she held until the birth of their son, Dan, in 1964. As the family grew with the arrival of daughters Carrie and Sarah, Mary remained a stay-at-home mom until the late 70s when she rejoined Public Affairs as a writer and editor for company publications. Her articles have appeared in The Arabian Sun, Al-Ayyam Al-Jamilah and Saudi Aramco World. The family retired to Austin, Texas in 1988 where Howard passed away in 2012. Mary retains a lively interest in world affairs, especially for those in need of justice.

To make a donation to UPA, follow this link: https://act.upaconnect.org/give/293203/#!/donation/checkout