March 4 Marks the Anniversary of Production at Dammam Well-7

Was it full speed to prosperity after Lucky 7?

On March 4, 1938, “Lucky 7” started producing and Saudi Arabia was launched on its journey to become the world’s largest oil producing nation. Or so runs the widely accepted version of history. But the two years after Lucky 7 were incredibly difficult. The author reveals three major events the early employees had to overcome in those critical years. 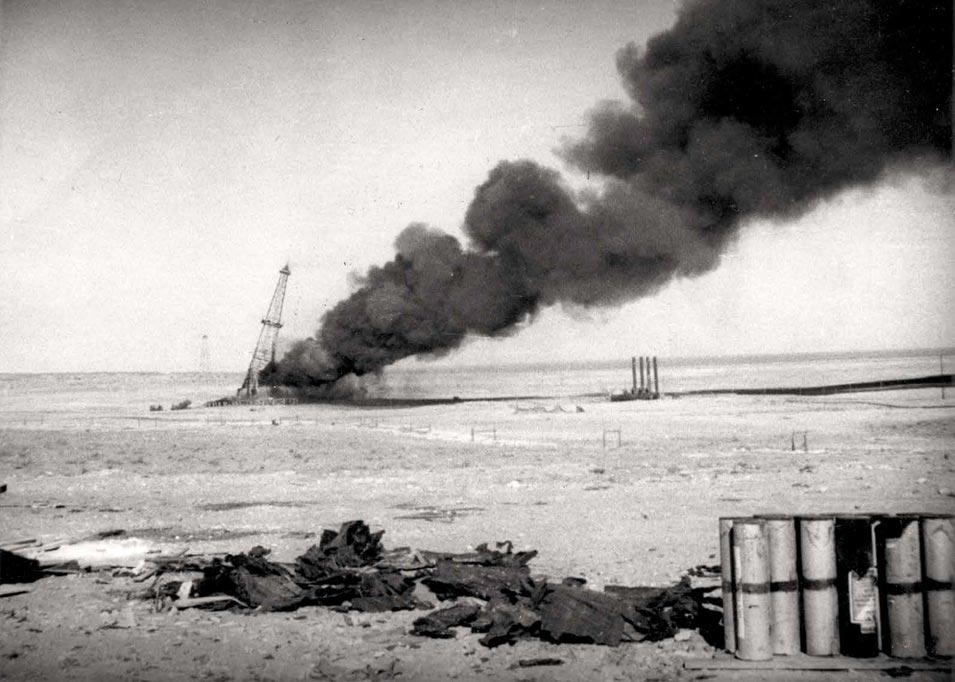 The fire at Dammam Well-12 on July 8, 1939, burned so hot that the 41-meter-high derrick collapsed after roughly 10 minutes.

Search for all-important second oil field: The second time is the charm

By October 1938, the Dammam field was proven and formally declared to the world. So far, so good. But for the Standard Oil Company of California (SOCAL), the company that had signed the Concession Agreement and went on to become one of the four owners of Aramco, a single oil field was never going to be enough. Back in the 1930s, Dammam and al-Khobar were tiny fishing villages with no 20th century infrastructure whatever. Everything SOCAL needed, they had to bring or build. As a single oil field wasn’t going to satisfy the shareholders, and to justify the colossal expenditure, SOCAL needed to find a second oil field.

Flushed with success at the Dammam Dome, they chose Abu Hadriya, some 160 kilometers (km) northwest of Dhahran, and started drilling there early in 1939. One of the young geologists in the team was the multitalented Thomas Barger, who rose to become Aramco’s CEO in the 1960s — his skill with a rifle impressed even the finest Bedouin hunters and his ability to learn Arabic likewise impressed King Abdulaziz.

Barger had secretly married just before he left America, and like any newlywed, he wanted to share his life with his new wife, albeit separated by more than 11,000 km. His letters home (preserved and published by his son) are an amazing treasure trove of what life was like for the earliest oil explorers.

Barger noted on Feb. 26, 1939, that “if the [Abu Hadriya] well is a dry hole, it will have a tremendous adverse effect … it would infinitely decrease the chances of finding oil in some other places.” The drilling team got to work. Expectations were raised as they reached the same depth as Lucky 7. Nothing. They remembered Max Steineke’s message when the whole company was in despair with Well-7 in Dammam: drill deeper. So, they drilled. War broke out in Europe in September and still they drilled.

In early 1940 the drill bit reached 3 km — more than twice the depth of Lucky 7, and at that time, an incredible depth and virtually unheard of anywhere else in the world. 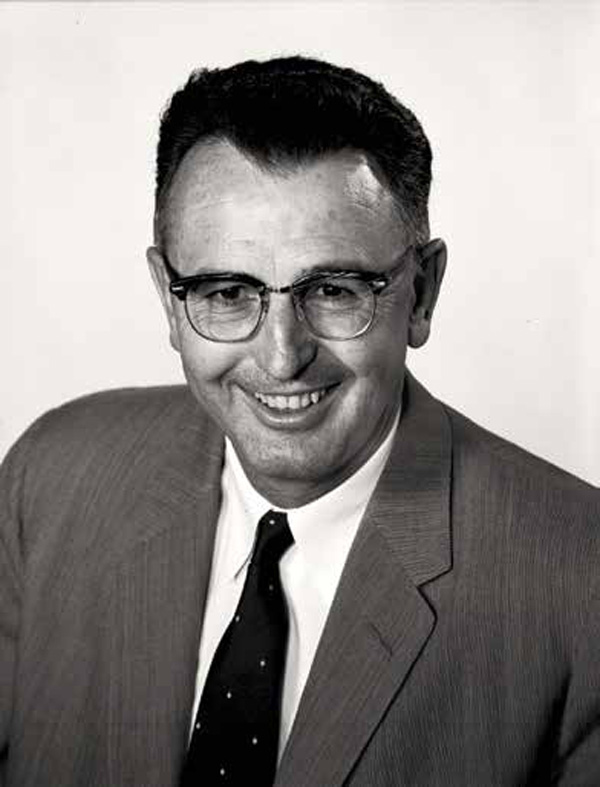 Division in the ranks

Barger recalls senior staff having “a big argument … with one faction in favor of deepening the hole and another group saying that the well was already at 10,000 feet.” The argument was decided by the SOCAL board who sent a terse instruction to Dhahran: shut down. The drillers reluctantly acknowledged the order and looked at the last pile of drillpipes ready for use; six pipes each of 90 feet. Then they looked at each other. Without a word, they made their decision and someone (never identified) conveniently misplaced the telegram. Before they finished using those last pipes, they struck oil.

Barger reflected on the massive significance of this in his famous letter of March 3, 1940: “The oil at Abu Hadriya means a great deal … now the company will start drilling another structure at a place called Abqaiq. This is going to be a great oil company.”

How right he was.

Tragedy at Well-12: A summer afternoon Like no other

On July 8, 1939, just two months after the very first tanker of Saudi crude oil had left Ras Tanura under the watchful gaze of King Abdulaziz, morale was high in the Dhahran camp. Saudis and Americans worked side-by-side, knowing they were developing probably the most exciting oil exploration site in the world. The camp had been set up six years earlier and was so well organized that a significant number of American wives and children had been living there for two years. Hundreds of Saudis were being employed and the local economy was buoyed by the enormous growth in activity. Everything looked rosy.

No one knows exactly what caused the explosion at Well-12. The crew were preparing the test-perforating gun when there was an enormous explosion, heard everywhere in the camp, and moments later, flames shot 200 feet into the air. Oil at tremendous pressure, coming from a mile down, was feeding the fire at the rate of about 8,000 barrels a day. The derrick melted and collapsed after roughly 10 minutes.

The acting resident manager quickly realized that the fire could cause the whole oil field to lose pressure and channel water into the oil zone, which would be financially disastrous. It was even possible that the well could spray burning oil and destroy the whole camp, which would be even worse. But he had no specialist firefighters to turn to. 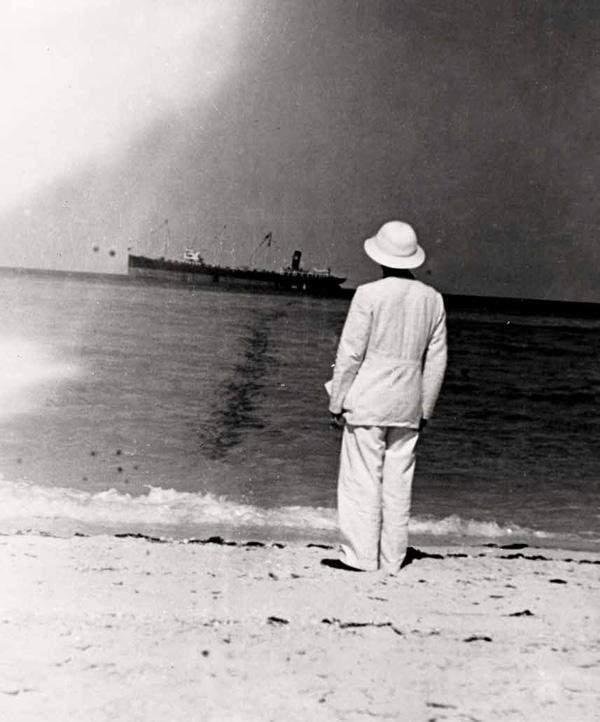 On May 1, 1939, a submerged pipeline delivers crude oil from Ras Tanura to the tanker D.G. Scofield, which is moored about one kilometer offshore.

Amateurs to the rescue

The company called for asbestos shields and suits from its sister operation in Bahrain and organized themselves into teams who, incredibly, advanced right up to the heart of the fire, with water hoses spraying over them, and devised a series of attempted fixes for the next seven days, each time reducing the size of the flames. By this time, the world-famous firefighter from Texas, Myron Kinley, had announced that he was preparing to fly the Atlantic (a daring feat in those days), and make his way to Dhahran to kill the fire.

As the professionals prepared themselves, the amateurs in Dhahran tried one last desperate ploy to fit a hot tap onto the bypass line, which would, if successful, force mud down into the well. They watched anxiously as the bit broke through the pipe — and the flames disappeared instantly. The telegram to the head office in California was modestly to-the-point: “Fire extinguished, hole full of mud. Professional firefighters not needed.”

The 10 days of hell were over. Unbelievable courage and extraordinary ingenuity had saved the oil field, and the entire community was wildly elated when the fire was finally extinguished. There is no doubt, however, that this was a defining moment in the early history of our company. Every employee and dependent was shocked and saddened by the event. Many procedures were overhauled and a culture of safety became, and remains to this day, a vital part of daily working life. Moreover, the sense of pioneering excitement of the early years was over. 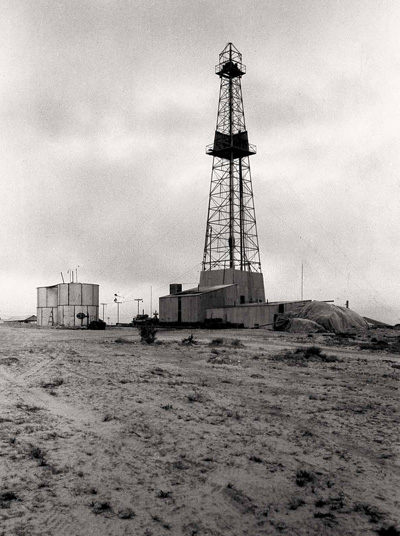 A drilling crew at Abu Hadriya, 161 kilometers northwest of Dhahran, struck commercial quantities of oil in 1939 at about 3,050 meters, more than twice the depth of Dammam Well-7. 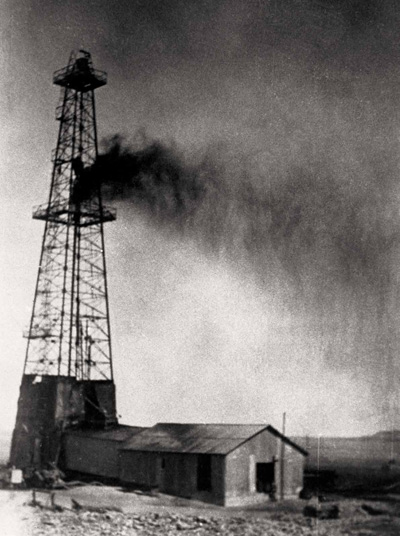 An unidentified well in Dhahran blows traces of oil in early 1938. A test of Well-7 on March 3, 1938, signaled the beginning of a new era: Saudi Arabia had joined the ranks of oil producing nations.

When France and the U.K. declared war on Nazi Germany on Sep. 3, 1939, it seemed to the Dhahran employees to be essentially a European affair. Even when Italy joined Germany on June 10, 1940, it did not seem to signify very much. All that was to change dramatically on the night of Oct. 19, 1940.

On that evening, Italian bomber planes took off from Rhodes (the island was then owned by Italy). Their By Stuart Burt mission was to disrupt the oil supply to the British navy in the Arabian Gulf and their target was the Bapco oil refinery in Bahrain. As they flew over the mountains of Lebanon, one of the planes got separated from the others, but carried on and spotted oil flares. The plane descended and dropped about 30 bombs … on the jebels of Dhahran.

Saudi Arabia was officially neutral; as was the U.S. at this point — the Japanese attack on Pearl Harbor that brought the U.S. into the war happened on Dec. 7, 1941. Therefore, the bombing that night was, to the Dhahran residents, not only terrifying, it was also totally inexplicable. Shortly after the raid, they heard on the radio that the bombing had been an accident by the lost plane — the crew thought they were over Bahrain. As it happened, the damage to Dhahran was minimal.

The impact of the raid was considerable. The company immediately started to scale back operations, and within six months the number of Americans was less than a quarter of what it had been on that fateful night. With such a large reduction in staff, the company had to shelve plans to increase production. It also closed the new Ras Tanura refinery and eventually sealed 10 of the 16 wells on the Dammam Dome. Consequently, the government of King Abdulaziz suffered a considerable reduction in income, which delayed numerous public works projects.

The sense of danger was amplified by the difficulties the head office in California had in shipping essential supplies to Saudi Arabia. This physical isolation, though hard to bear, did not break the spirit of “the remainers.” They started drilling at Abqaiq early in 1941 and discovered an oil field that looked to be far bigger than Dammam. They had no resources to develop it of course, but the news of the extraordinary flow rate at Abqaiq No. 1 (9,720 barrels per day) convinced them that persevering was worthwhile.

Those early employees had overcome three massive hurdles after Lucky 7: They had survived the stakeholders’ pressure to find a second (and indeed a third) oil field; they had extinguished the terrible fire at Well-12; and they had survived an air raid.

Nothing could stop them now.