Going the Course: Vignette from 'Tales from the Desert: An Arabian Memoir' 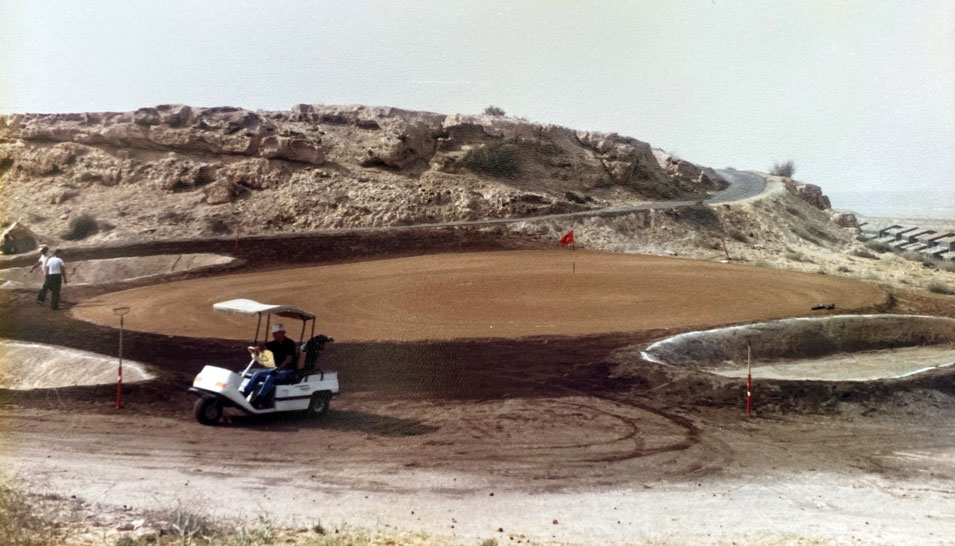 Golf was the love of many Americans and it was no surprise to find that in Dhahran as well as some of the other larger Aramco communities, this sport had been catered for in some rudimentary fashion since the early days. Over the decades, the standard of the courses had gradually improved and areas of hitherto barren sand had undergone a remarkable degree of landscaping…… they were however still sand.

In the days before the development of huge seawater desalination plants, water was available only through ancient aquifers and was therefore a scarce and valuable commodity. Spraying millions of litres of water on sand to grow grass for a mere sporting activity, was obviously not an option, so a golf course had of necessity to be sand. The grandly titled Rolling Hills Country Club in Dhahran, comprised three nine-hole courses, East, West and South. They were contiguous, so a combination of any two would allow an eighteen hole round of golf.

The fairways consisted of rolled sand, while the ‘greens’ were in fact brown and used finely grained sand sprayed with crude oil, producing a putting surface not unlike that of finely mown grass. After playing the hole however, the foot and ball marks needed to be raked and rolled, though this was not a job for the golfers.

A worker, usually from the Indian sub-continent, was on hand to perform this task throughout the day and after each group of golfers had completed the hole. He would drag a large rake in concentric circles around the surface until all was ready for the next group of players. Sadly these individuals were not provided with any proper protection from the fierce sun, or other elements during the long day. They would construct rudimentary places of shade among the rocks and bushes, covering themselves where necessary with bits of discarded cardboard boxes, or sheets of metal foil. 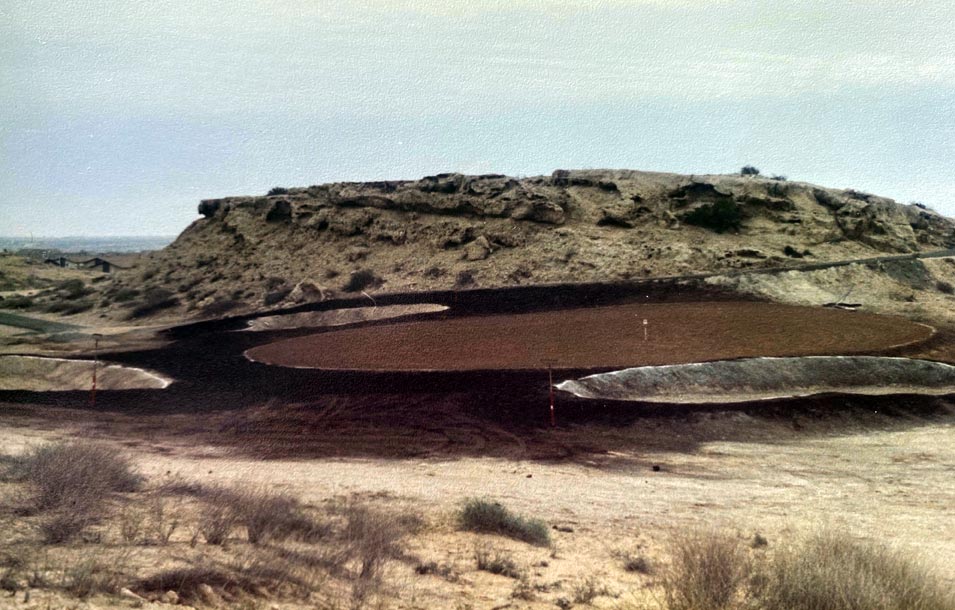 One of the 'Browns' Rolling Hills GC

The tee boxes were rubber mats with built-in tees much like you would see at a golf driving range, but for any shots taken on the fairways, or indeed in the ‘rough’, players carried a square foot of ‘astro turf’, or mat as we called it. Local rules, therefore, permitted the lifting of the ball from its place of rest and onto the astro turf mat from which the next shot would then be played.

The upside of this was that regardless of the actual lie of the ball, fairway or not, the next shot would always be played from a smooth, if artificial, surface. I hadn’t played a great deal of golf before arriving in Saudi Arabia, but over the years I got used to playing with a mat. When I ultimately returned to this country I found that hitting the ball on natural grass with its varying lengths, lies and moisture content made golf a great deal more difficult……..at least that’s my excuse.

The club was a vibrant one with gents and ladies captains, a clubhouse complete with changing rooms and a fast food restaurant. Lines of small golf buggy garages with chargers stood behind the clubhouse and the driving range had canopies over each tee box for shade.

Numerous competitions were held throughout the year. The major ones were the ‘Presidents Cup’ where prizes were awarded by the Aramco CEO as well as the annual ‘Turkey Shoot’ which took place just prior to American Thanksgiving Day in November. This was a particular highlight, with every single player guaranteed a large turkey regardless of how appalling their score. I confess that these turkeys were the only prizes I ever won throughout my many years of membership.

In later years, with the widespread availability of desalinated water, many golf courses throughout the Middle East were grassed and equipped with comprehensive sprinkler systems. The Aramco course in Dhahran was no exception and is today a wonderfully green and landscaped area, dotted with palm trees and water hazards. The astro turf mats carried around by golfers over many decades, now but a footnote in history.

View photos of the Dhahran Rolling Hills Golf Course and Country Club from over the years: