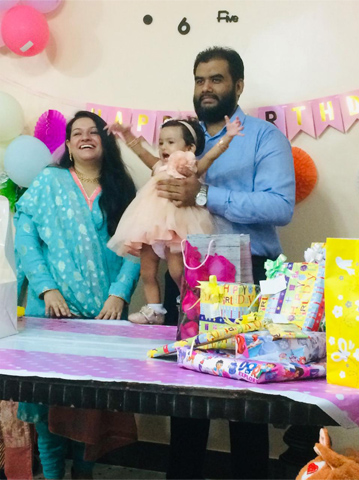 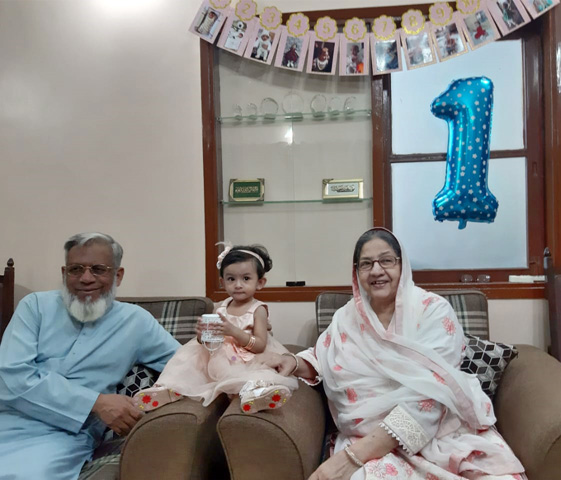 The following report was written by Zoya Imran, granddaughter of Engr. Iqbal Ahmed Khan of Karachi, Pakistan. Zoya is a student of VIII Standard-Generations School.

Ayra Bilal Khan, daughter of Bilal Ahmed Khan turned one, on 12th October 2020. Her first birthday was celebrated on 10th October because of the weekend. Bilal is the nephew of Engr. Iqbal Ahmed Khan (SAEEA VP) and the oldest of his 4 siblings.

All family members were invited. The arrangements were made in the drawing-room. Colourful and pastel balloons were put up in each corner to set the mood. There was a table along one side of the wall, where the cake cutting ceremony was held. There were multiple decorations and props set on the table. Behind this wall, a rose gold coloured “Happy Birthday” banner was attached with lots of other wall decorations making it look very pretty. Ayra’s timeline throughout the months were put on two walls with a big balloon displaying the number 1.

Her cake was also peach and rosegold coloured, with a fondant moon and stars. It was chocolate flavoured and looked ethereal. Everybody brought gifts for baby Ayra and she herself was in a very delightful mood. She looked very cute, MASHA ALLAH.

Dinner was served after the cake cutting, there were Kachoris, Seekh Kababs, Chinese Chickpea Gravy and all was very delicious. For dessert, there was the Birthday Cake, Vanilla Cake and Keer.

Everybody enjoyed the event, Alhamdulillah and everything went well. Baby Ayra received many gifts and prayers from everyone.