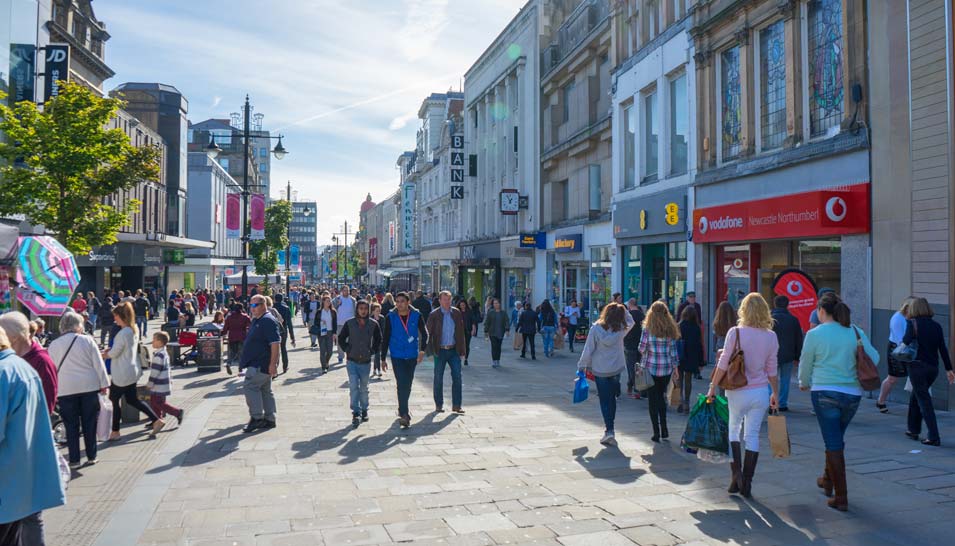 Then, in 1994, the last remaining regional coal mine, the Wearmouth Colliery in Sunderland, shut down, bringing the history of active coal mining in the Newcastle area to a close. So, does it make sense today to send coal to Newcastle? Probably not. Or maybe, instead, oil from Arabia to the nearby Port of Tyne? Unlikely, given the fact that the port is not equipped to handle tankers. Perchance something else, then? AXP has a suggestion. How about diamonds?

It’s widely believed that coal, when placed under enormous pressure at extreme temperatures deep within the earth’s mantle, can produce diamonds. In 1993, a year before the region’s last colliery closed down operations, Aramco sent to Newcastle neither coal nor oil but rather a quintet of genuine diamonds—Peter and Margaret Jackson and their three children, Kim, Kevin, and Kieron. Peter had retired in early April of that year after living in the Kingdom working for Aramco for 21 memorable years. He spent the bulk of those years as a department supervisor overseeing the QUU 1 and QUU 2 seawater pipelines carrying water from the Arabian Gulf to the Ghawar oil fields.

In truth, most diamonds are formed from carbon sources other than coal. Humans are carbon-based life forms. It makes a tiny bit of sense, then, to think of the Jackson family as five carbon-based diamonds forged in the heat of the Arabian desert. That’s how we here at AXP have chosen to view them, anyway, for the purpose of this article and in recognition of Peter and Margaret’s home in the former heart of English coal country.

Peter, Badge Number 061392, together with Margaret, lived and raised their children in the Abqaiq Compound (E-207). Today they live at Winlaton, 34 Wallington Close, Blaydon on Tyne, County Durham NE 21 5 EU United Kingdom, five miles east of the Newcastle upon Tyne city center and less than a mile from the banks of the River Tyne.

Peter had a good idea of what the Kingdom offered even before he and his family moved there.

“I had many ‘happy memories’ of Saudi Arabia,” he recently told AXP, “having visited many times during my career as a Marine Engineer with ‘Stanvac/Mobil’ and ‘Gulf Oil”.’ From Day One, (March 1972) I had always been impressed with the attitude and efficiency of Aramco personnel, especially of the efforts to make me feel ‘at home and like one of the family.’

“Living and working in Saudi Arabia was (to me) a pleasure. Of course, there were many things to be aware of, especially the attitude towards religion, and it was always in one’s mind that we must respect the emphasis placed on it by the people there."

“There were so many other things which made life and work so pleasurable. Sorry to say, but the 20 years I was in Saudi Arabia left me with an abundance of memories which would fill far too many pages were I to try to chronicle them all here.”

“My favourite memory of Saudi Arabia,” Peter continued, “is that of being greeted and accepted as a ‘friend’ and being able to share my thoughts and feelings with others with no worries about upsetting anyone."

“Remembering that it is now 25 years since I retired, I often wonder where all my friends and “buddies” are these days.”

(If any of Peter’s friends and buddies are reading these words, he encourages you to email Peggy and him at [email protected].)

When asked by AXP what his favorite hobby was, Peter wisely answered, “Making sure that my lovely Margaret is happy and not over-worked.” Kudos to that!

“Not being able to swing a golf club anymore,” he went on, “my most favourite past-time now is to be able to sit and watch the ‘big men’ on TV making the game look so easy.”

Another top spot in Peter’s list of favorite hobbies, he tells us, “goes to watching and supporting the BEST football team in the North East of England, my ‘Bonny Lads’—Newcastle United.” Among the fiercest rivals of the Premier League, Newcastle FC Magpies are the League One Sunderland FC Lads, whose Stadium of Light sits directly atop the former site of the aforementioned the Wearmouth Colliery. The two sides have been waging war against each other in the annual Tyne-Wear Derby since 1898 when Queen Victoria still sat on the English throne. Their rivalry is legendary, as intense as any in professional sports. And Newcastle fans are reportedly the people who put the “fan” in the word “fanatic.” Just ask Peter.

When not matching goals with Sunderland, as a Premier League member Newcastle regularly faces off against the imposing likes of Manchester United, Manchester City, Chelsea, and Arsenal. As the Magpies’ number one fan, Peter has a lot to cheer about. Go, Magpies!

English football clubs are famous for their songs and cheers and chants, and Newcastle Magpies supporters are no exception. Here are the words to one of their oldest chants, one that’s heard at least once at every match:

When asked about what plans he might have to attend an annuitant reunion, Peter responded, “Sorry to say, I have not been to any of the UK reunions. We were in Germany on ‘holiday’ when the first one was held, so no excuses there. We did try to book in for the next two, but got the age-old reply, ‘Sorry! We are fully booked.’ Sorry to say, “‘enough said.”

Peter has a message for “all my ‘sidiques’ in the lovely old Abqaiq, our Friendly City”:

“Tell everyone, we do think a lot about you all, Bill Davies and Ida, Mother May, the gorgeous Pamela (Miss *) and everyone left in the Noble Ninth.”

Let Us Write About You