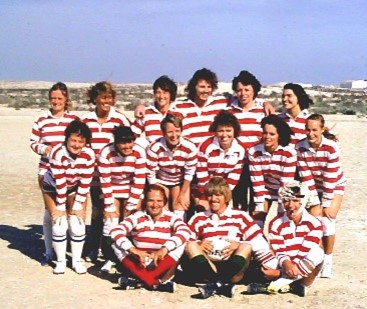 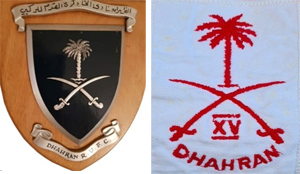 The main Office Holders established under the Constitutions and who held office while the Club existed were:

There was, in addition to the Office Holders above, a Fixtures Secretary and a Social Secretary, and then the second Constitution provided for an extensive support structure:

And, of course, there were others who gave their time and found the resources to help.

Recollection by Lesley Williams 1979 – 1986 who was Secretary in 1983/84, Editor of The Dummy and co-producer of DRUFC publications: 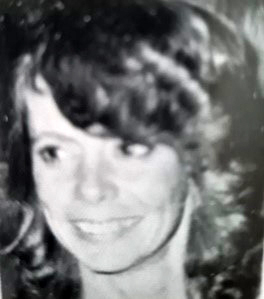 I arrived in Dhahran in January 1979, the day after the Shah of Iran fled to Egypt. There’s no real connection. A week later, I was at a party which introduced me to the Rugby Club. So, when I applied for my first exit/re-entry visa to go to Kuwait, my supervisor felt compelled to ask if I was going with “that rugby club,” adding, “You won’t get far with that lot.” Well, she was wrong. I covered all of the Gulf and tagged along on tours to Bangkok and Manila.

No more on that, though, you had to be there! Putting DRUFC on my CV helped land me a dream job in Geneva later. I remember two girls' versus boys’ rugby matches on the old rough end-of-the-airport pitch. To be fair, the boys played in wellies filled with sand or tied to each other and the definition of “off-side” had to be rewritten. I thought the coaching team of Hamilton, Grabs and Cocks had every right to be proud of their girls.

We organized more events than any Olympic Committee: 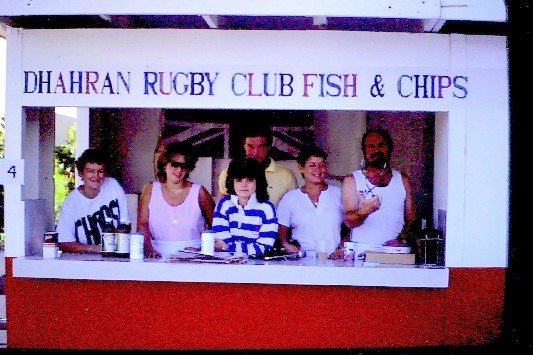 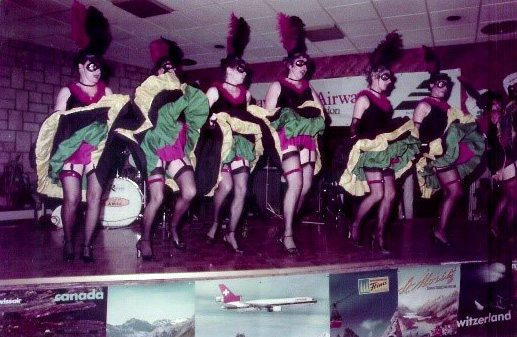 Back in pre-internet days, getting news out and keeping everyone in touch was a job for good old paper newsletters. The words “you have just been handed a Dummy” introduced what was meant to be a regular news outlet for the club. It didn’t always come out on time but was fun to produce. I’d like to take the opportunity to thank Aramco for the photocopier and the VP of Materials Supply for not giving me very much to do. 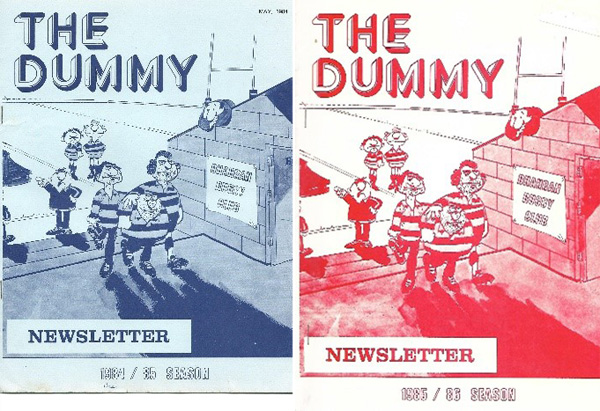 And our world did not just revolve around the rugby pitch. I remember DRUFC golf and sailing sub-groups. I remember so many parties, so much fun and laughter, home games, away trips, so many good times. Thank you all. 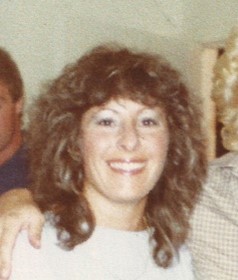 It wasn’t long after I arrived in 1977, that I was taken along to a DRUFC event. Over the years I got more involved, and I can remember lining up with the players at the old pitch picking up the rocks and throwing them off to the side before they could play. 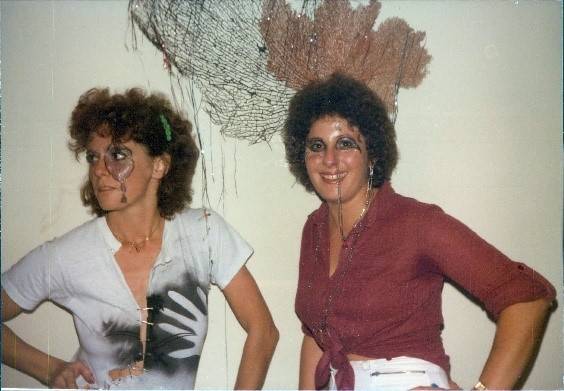 We had so many amazing events - sheet and pin, hat party, punk party and annual May Balls.  I can remember lots of fantastic trips to other Gulf states for rugby matches, especially the smell at Bahrain’s pitch with a chicken farm just up the road and The Red Lion pub in Dubai which was such a complete contrast to the Dubai of today.

What fun it was working with Lesley Williams to produce tour brochures for Singapore, Bangkok, and Manila. Everyone was such a good sport about it. We were asked to put together the various magazines for the "Tours" to places like Bangkok, Singapore, and Manila. We spent many hugely entertaining hours prising photos and information out of various members of the club, some more forthcoming than others. Some of the stories when the guys returned are not fit for publishing in this recollection!! 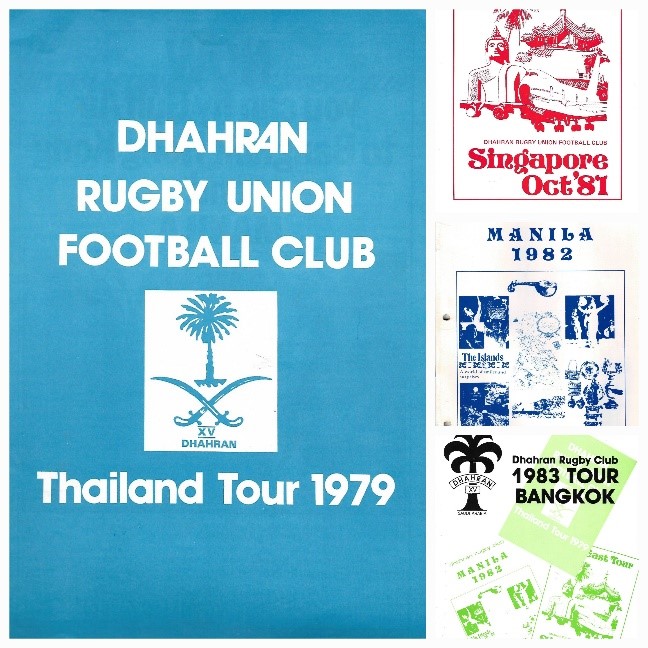 I also remember the Village Fete that DRUFC organized in Dhahran where we had a traditional Fish and Chip stand along with 'It's a Knockout' games. I seem to remember that it got very windy and dusty towards the end, and we had a lot of frozen cod fillets left over.

As I had taken on the catering for DRUFC functions, especially when other Gulf League teams were visiting, I was given the task of using up the fish. What else could be done but Fish Pie! I had a team of people helping - peeling and mashing potatoes into a bucket and cooking the cod in milk to make the sauce. When asked, "What's for dinner after the match?" and I replied that it was "fish pie," a lot of people looked disappointed until they ate it, and all came back for seconds.

Other publications we had to produce would have been Match covers such as these: 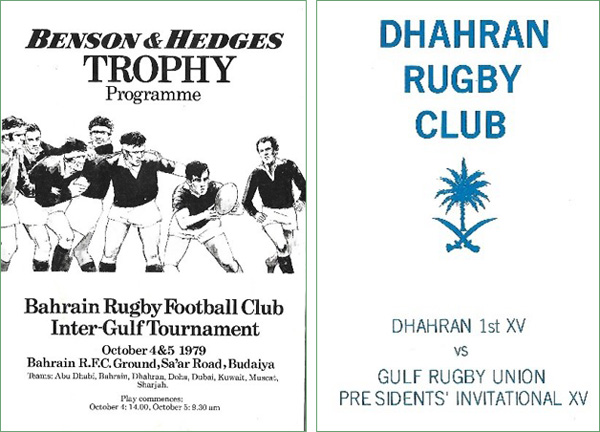 The Club brought everybody together and through the home and away games we got to meet and know lots of others, all drawn to work and play in the Middle East. A time that we all enjoyed and has given us lasting friendships. 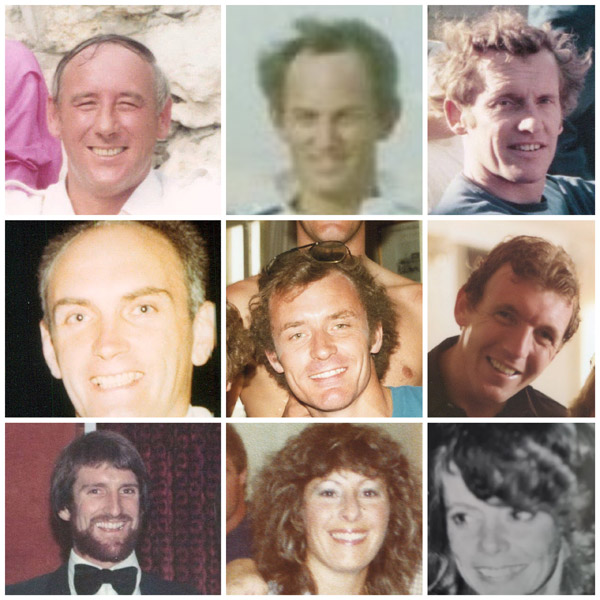