Dancing at the Camel Races 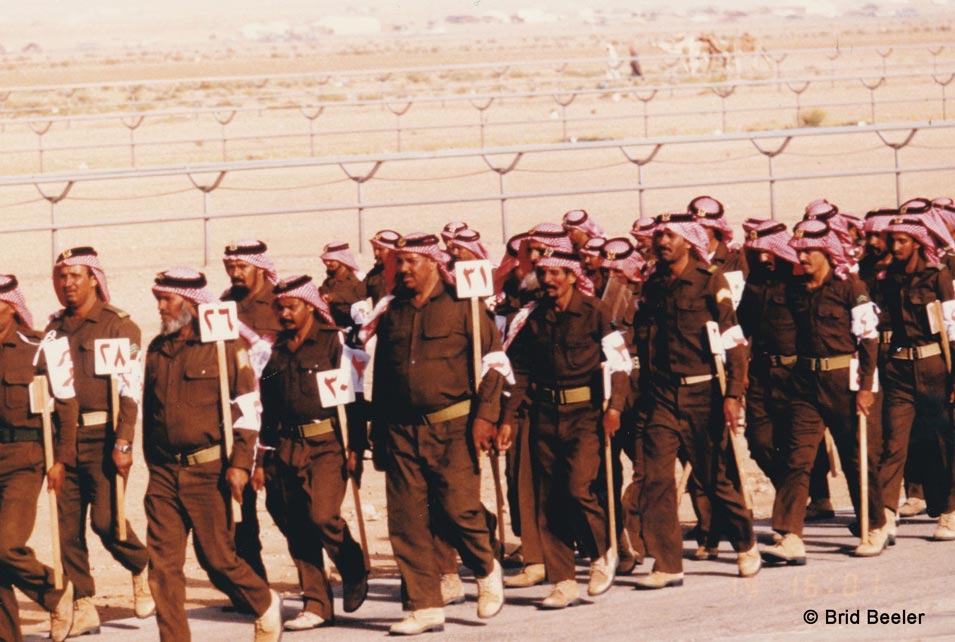 The annual Al Janandriyah camel festival had been held near Riyadh since 1985 but we never knew exactly when. Every spring, we waited in anticipation for rumors of when the races would run and more importantly what day in the two-week festival would be allocated for expat families to attend. That was the tricky bit.

The festival would be announced then unexpectantly delayed by a week and then again, maybe delayed by another week. These sorts of teething problems were common in the early days of the festival. Then suddenly we would hear it was in full festival mode. But the festival was the domain of men and the exact timing of the ‘family days’ was often rather vague. 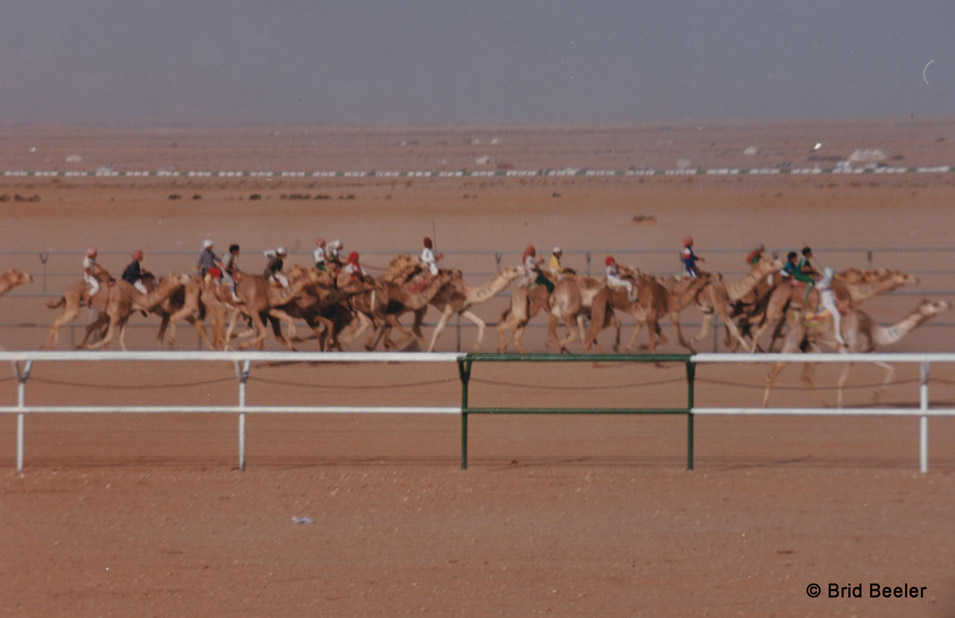 When the day finally arrived, on a weekend in the afternoon, we drove off into the desert. It was 1990 and my first time to attend the camel races. We headed off in the direction of King Khalid International airport but then went east towards the village of Al Janandriyah off the Khurais road.

To our surprise there were only a handful of expatriates present. We were led to the VIP section where we sat in the Royal covered stand reserved for Royal family members and other government dignitaries and diplomats. We melted into plush and comfy chairs while many stood to the right and left of our stand. 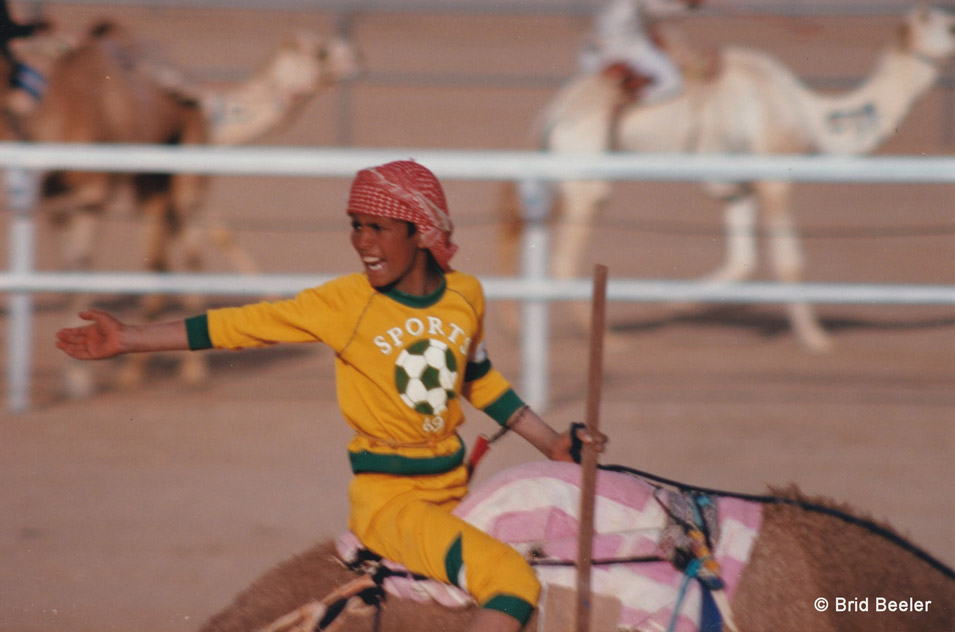 A sandy track lay before us with railings in the background and clear blue skies overhead. The ceremonies began with a parade of the Saudi National Guard, sponsors of the event and the Kingdom’s main internal security force. Then, slowly, the camels started appearing on the track, led by their handlers and jockeys in colorful silks. We wondered how the young jockeys, perched precariously near the camels’ rumps, managed to stay on... an engineering fete in itself. With little ado, the camels were soon bunched together, and the race was off. As they tore past the stand the air became thick with dust and the camels soon disappeared out of sight. Round and round the track they circled covering about 20 kilometers before finally reaching the winning post back at where they began. Each time they strode past our stand, we marveled at the silence of these desert beasts galloping at full speed. Their broad feet on the sand making none of the loud galloping noises associated with horse racing. 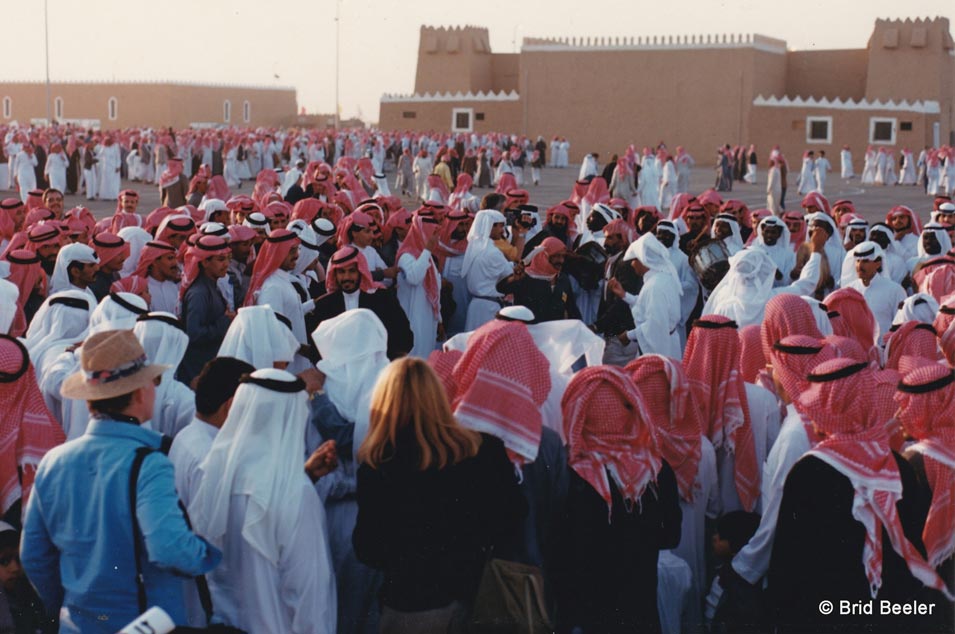 The Beat of the Drum Ardah

Clearly, the crowd took the racing very seriously. The King’s Cup, the main event on the racing calendar, is a coveted event and pedigreed racing camels bred specially for the track cost hundreds of thousands of dollars.

There were several races and after some time the crowd began to dissipate. As we left the stand, we heard the infectious beat of a drum and the sound of singing. Groups of Saudis in white thobes and traditional red and white patterned ghutras were gathered in a circle of about 5 to 6 rows in depth. The beat of the drum came from the midst of the circle. 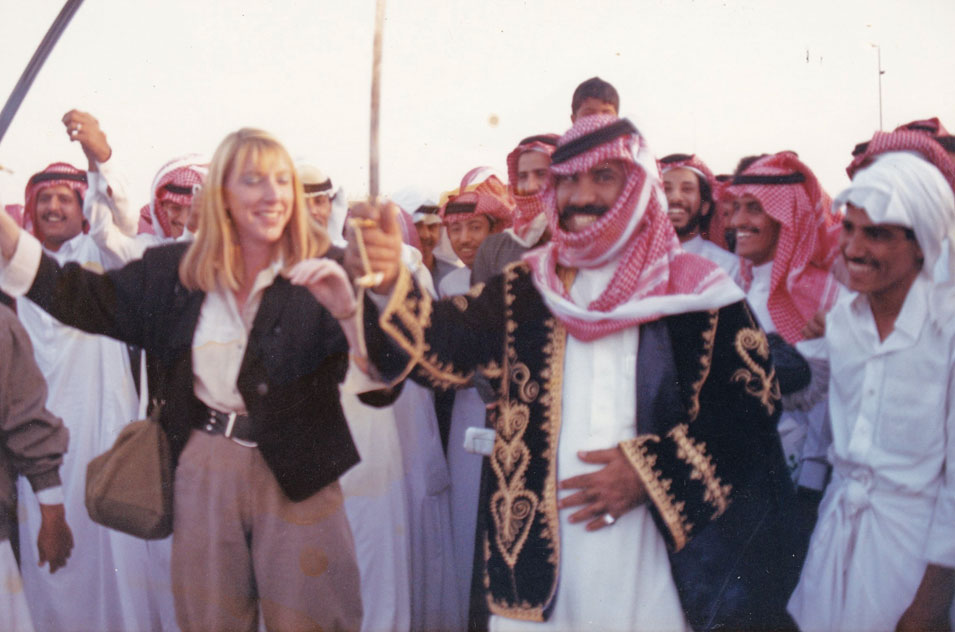 I squeezed through the crowd, much against my husband’s over-protective protests. Men stepped aside to let me into their domain and at the front and center of the circle the Ardah (the Saudi National Najdi folkloric dance) was in full mode. Men were wearing beautiful black rich velvet gold embroidered jackets over their thobes, with the whirling swords high overhead and dancing and singing to the beat of the drum. Before I knew it, I was in the midst of the circle having been led in by one of the dancers and handed a sword to join him in the tribal dance which recalled battles and victories led by King Abdulaziz Al Saud, the Kingdom’s founder.

It was simply magical. A grand celebration of a Saudi cultural tradition and a chance to dance with a sword. What could be better!