“How was your leave?” “Where are you planning to go on holiday?”

While the day-to-day workplace can be similar anywhere in the world, one of the favorite pastimes for ExPats living abroad is to discuss, seek advice, reminisce, and plan for their holidays.

Expatriates living in the Middle East have the unique opportunity to travel the world. Vacation allocations are generous, and many families eagerly explore places near and far. It seems that one can always find a friend, or colleague, who has traveled to just about any country you can name.

Cuba was always an enigma. What was it like there? Photos and travel articles described a fascinating scene. We had considered visiting Cuba once or twice but thought better of it when faced with the ongoing American embargo and difficulties it presented.

Finally, three years after retirement from Aramco, a plan was formulated to reconnect with friends we had known in Abqaiq. A former Aramcon, Jack Moyer, had been to Cuba before and, happy to return again, he recommended a locally-run tour company out of Havana that he had used several years before.

And so, in late 2019, serious planning commenced. A group of seven travelers was formed, including five former Aramcons:

The other two non-Aramcons were friends of the Bustins, who soon became our friends, as well. We brainstormed what we would like to see and do during our time in Cuba. Some of the ideas thrown out were guided city walking tours and museums, the classic car tour, live music, swimming at the beach, cigar and rum factory tours, local cuisine, and Ernest Hemingway’s home and haunts. Daiquiris and mojitos were also mentioned more than once. We even enjoyed a night at the ballet in the historic Gran Teatro de La Habana.

Once our aspirations were collectively honed and agreed upon, the tour company, Locally Sourced Cuba Tours, created a custom nine-day itinerary for us that included Havana, Trinidad, Cienfuegos, and the Bay of Pigs. The tour included private transportation, an English speaking guide, nightly accommodations at various Casas Particulares (private guesthouses) and a visit to the Hotel Nacional in Havana, made famous by a bygone era of well-heeled travelers, Hollywood glitterati, and athletes, including the Duke and Duchess of Windsor, Frank Sinatra, and Mickey Mantle.

Simultaneously, we organized the mandatory travel insurance and applied for our Cuban visas online. Flight arrangements were made to meet in Cancun, Mexico, on January 28, 2020, and then fly from there to Havana on the Mexican airline, InterJet.

The next nine days were a delightful kaleidoscope of the music, laughter, colors, tastes, scents, and warm smiles of the Cuban culture, thanks, in large part, to our excellent guide, Mr. Franklin Utria Matos.

Little did we know that we had commenced our trip on the eve of the worldwide Covid-19 breakout. Shortly after we completed the tour, travel restrictions and lock downs were put in place in both Cuba and the United States. 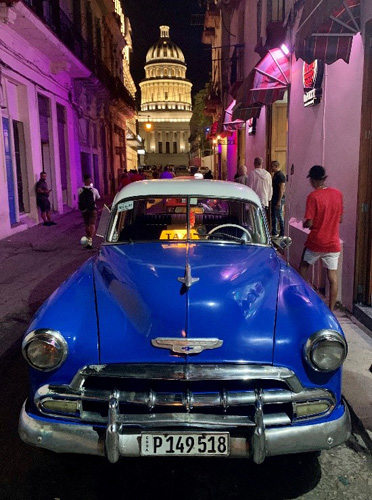 A vintage Chevrolet taxi in Havana with the capitol building (El Capitolio) in the background. 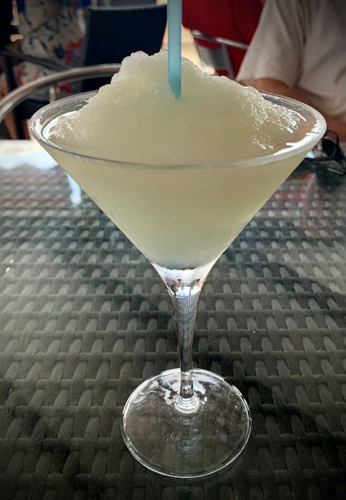 As the story goes, this version of the Hemingway Daiquiri was created under Ernest’s watchful eye at the El Floridita Bar, Havana. 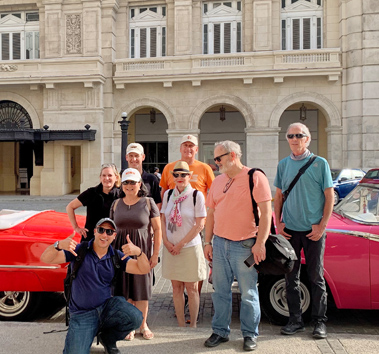 The tourists with their guide, Franklin (kneeling), about to embark on a Havana Vintage Car Tour. 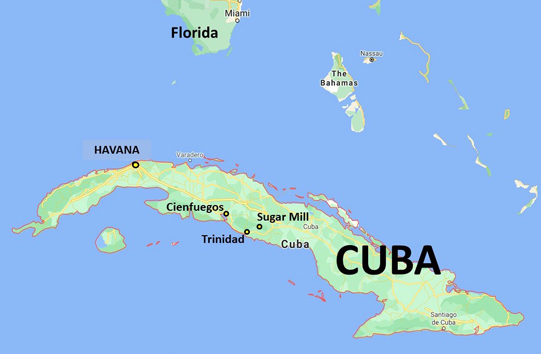 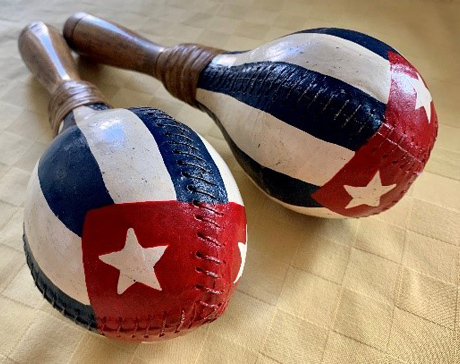 The band plays and you are handed a pair of maracas and invited to join in. 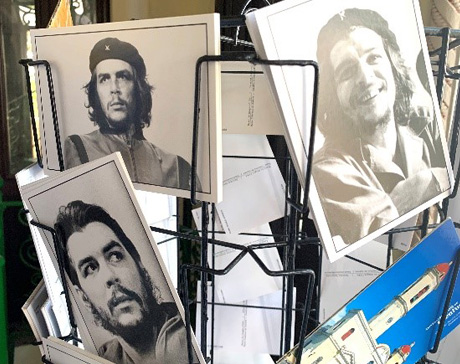 Ernesto "Che" Guevara. Images of the Argentine Marxist revolutionary and one of Cuba’s national heroes, are ubiquitous. 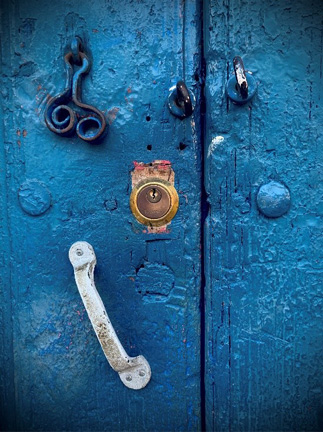 An ordinary, well-worn entry door to an interior courtyard becomes a work of art. 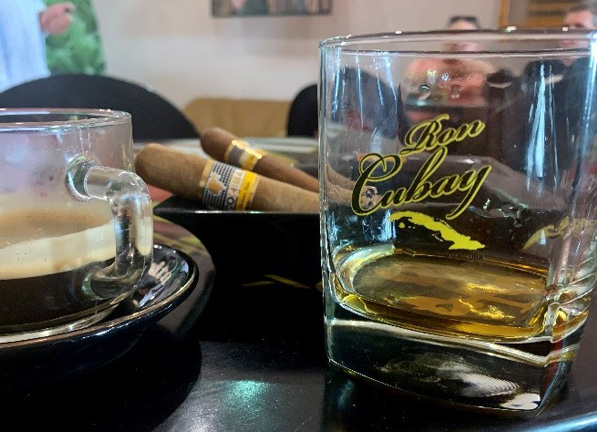 Cigars and rum are two main themes in Cuba. And coffee. At the La Triada Cigar and Coffee shop in Havana, visitors are treated to a delicious tasting trifecta: a small sip of strong black coffee, followed by a little rum, followed by a puff of a Cohiba Cuban cigar. Repeat.

Founded in 1519 by the Spanish and now populated by friendly locals called Habaneros, Old Havana originated as a crossroads to the New World attracting explorers, buccaneers, colonial powers (Spain and Britain), indigenous people, entertainers, and exiles.

Having slowly fallen into disrepair over the past 50 years, Old Havana, a UNESCO World Heritage Site, is slowly undergoing painstaking renovations to some of the most unique architecture in the world. 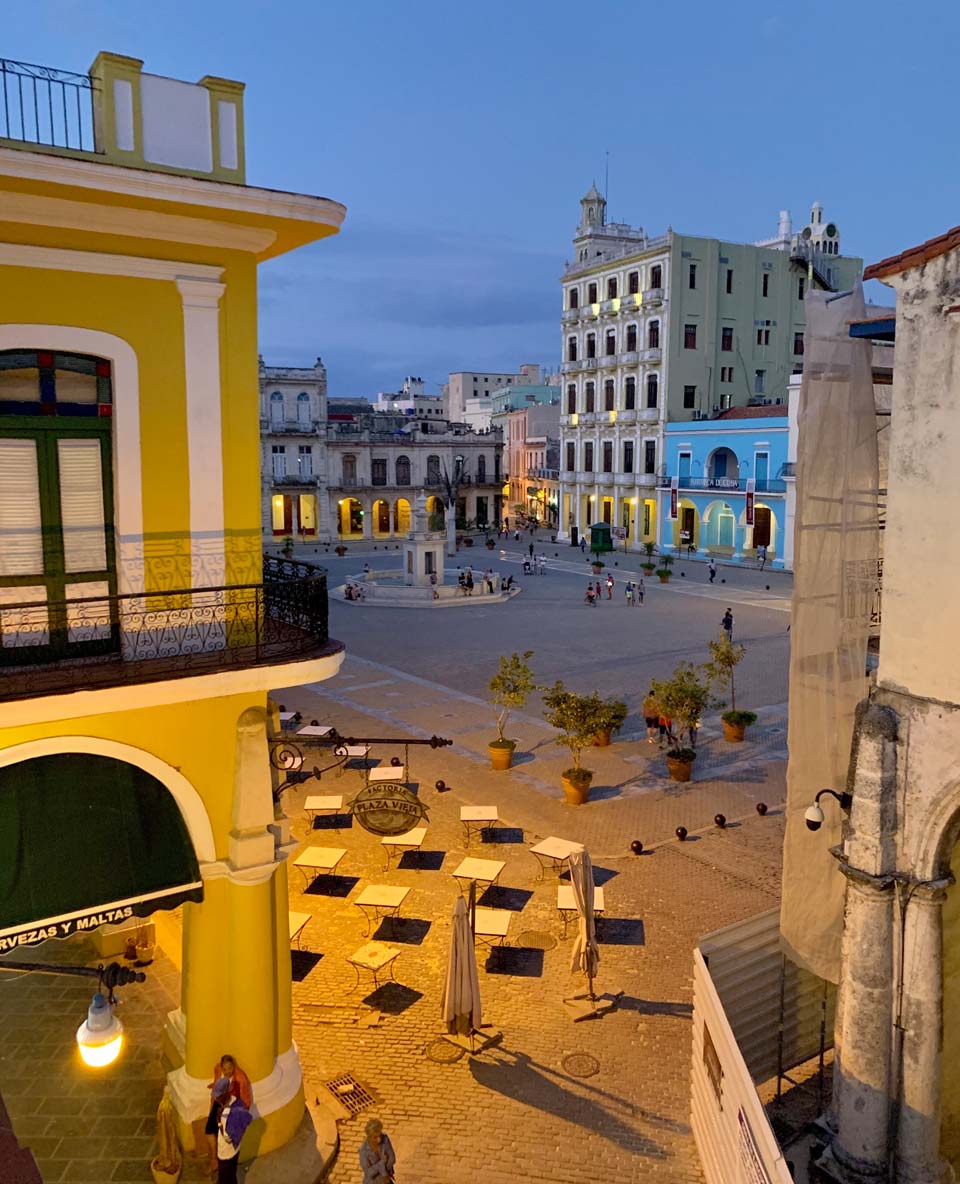 Plaza Vieja, as viewed from the rooftop of our Casa Particular (private guesthouse) in Old Havana. 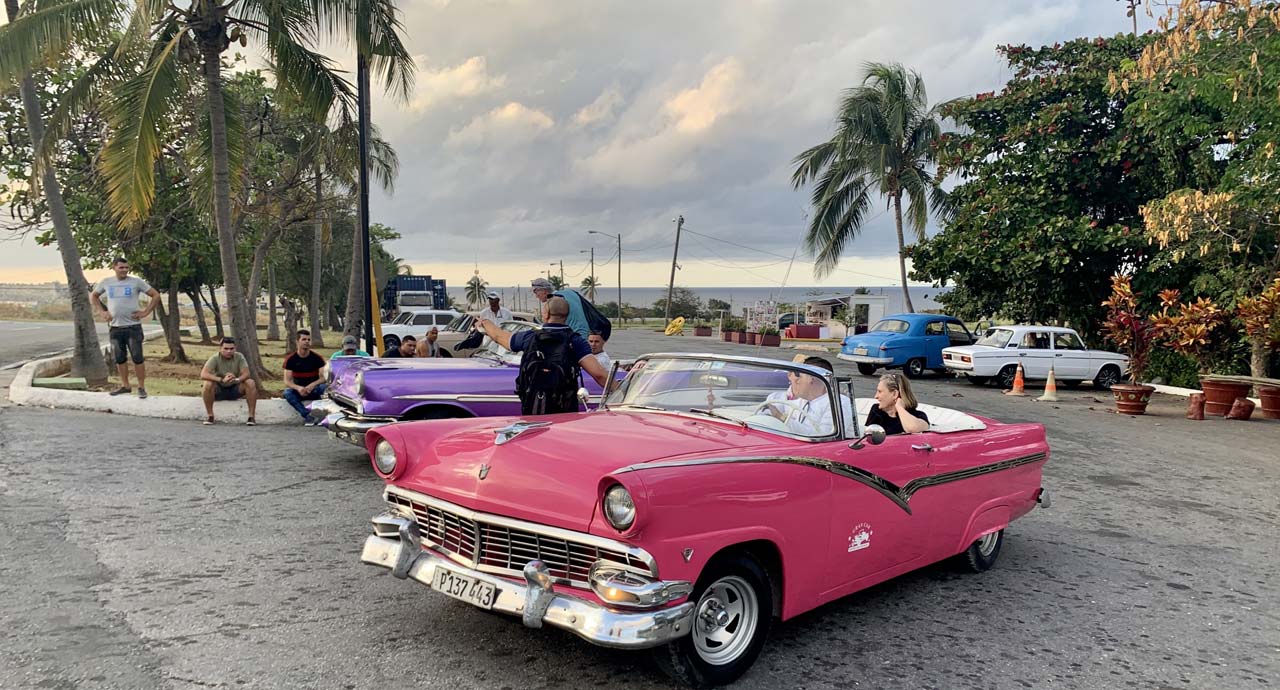 1950s-era American automobiles are used as taxis and to carry sightseeing tourists.

250 miles from Havana on Cuba’s south coast, provincial capital Cienfuegos is famous for its colonial architecture. 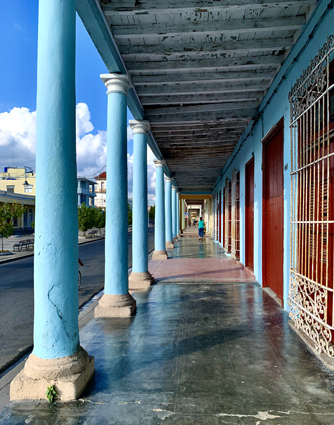 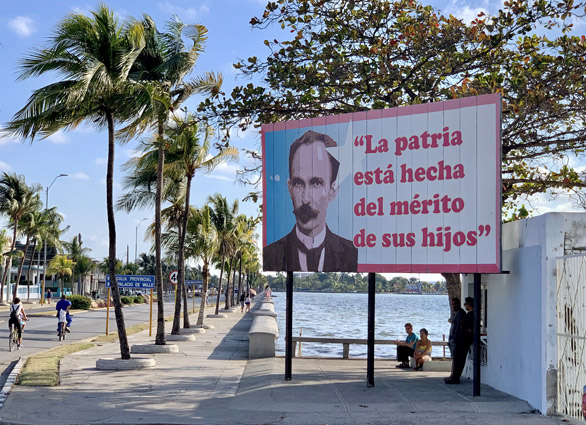 A billboard quoting José Martí, one of Cuba’s national heroes, states, “The country is made of the merit of its children.” 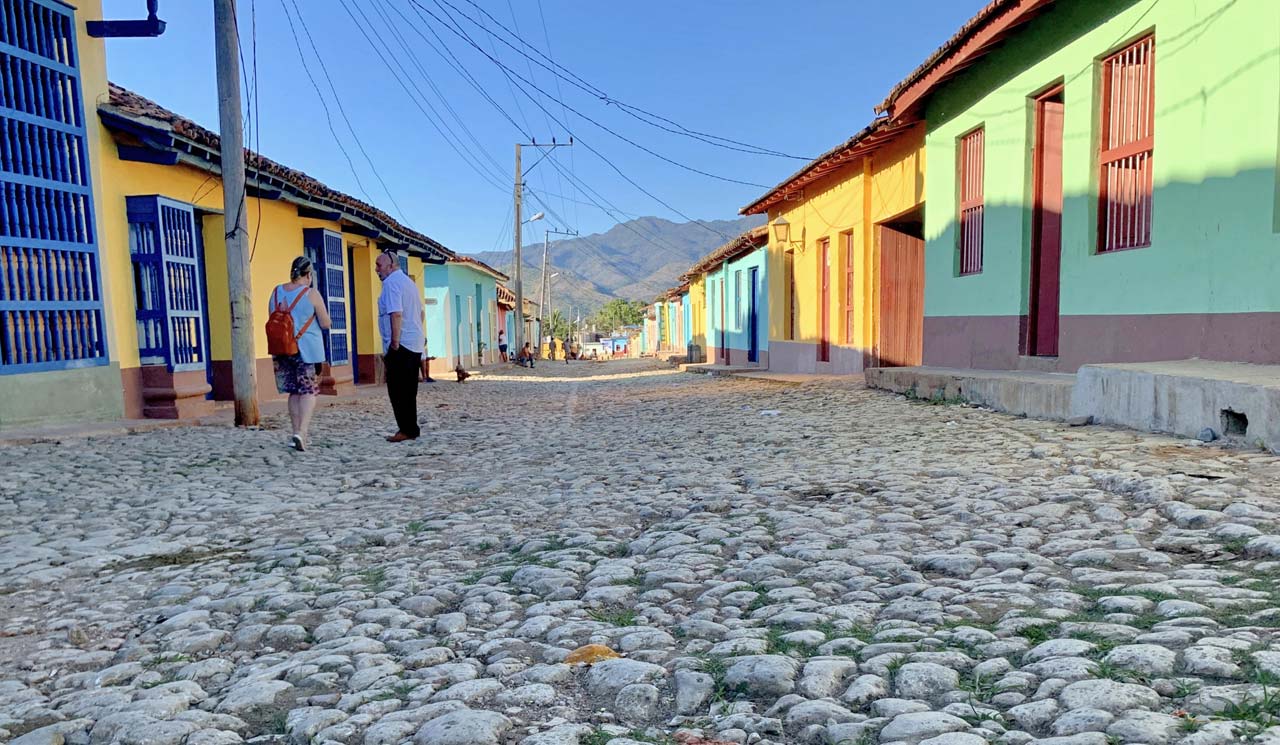 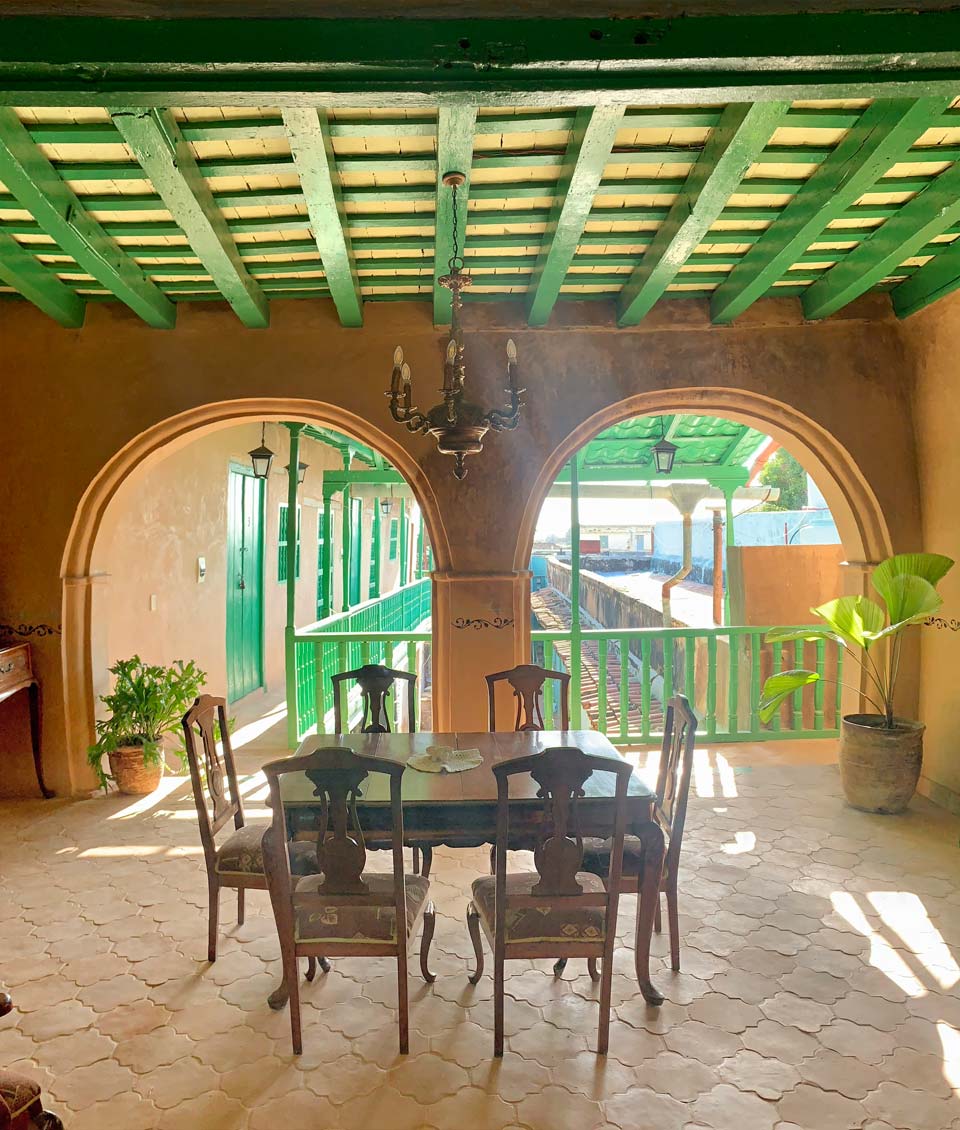 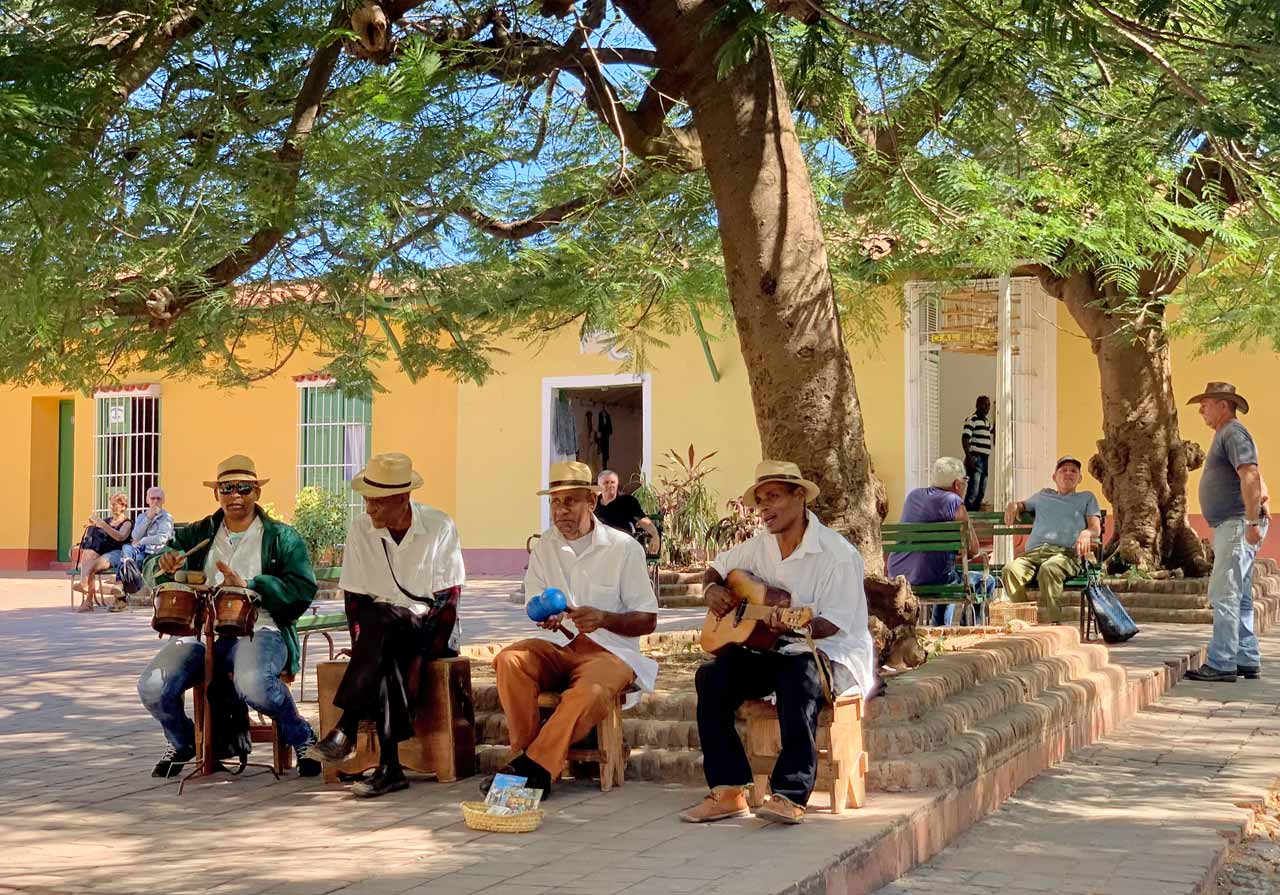 A casual quartet strikes up the Cuban folk song “Guantanamera” and passersby are invited to sing along.

In 1512 the Spanish introduced sugar cane to the hilly region near Trinidad. The soil and climate were ideal. At its peak, in the late 1700s and 1800s, Cuba was the world’s largest sugar producer. The industry supported over fifty sugar mills and some 30,000 slaves imported from Africa were required to operate them. 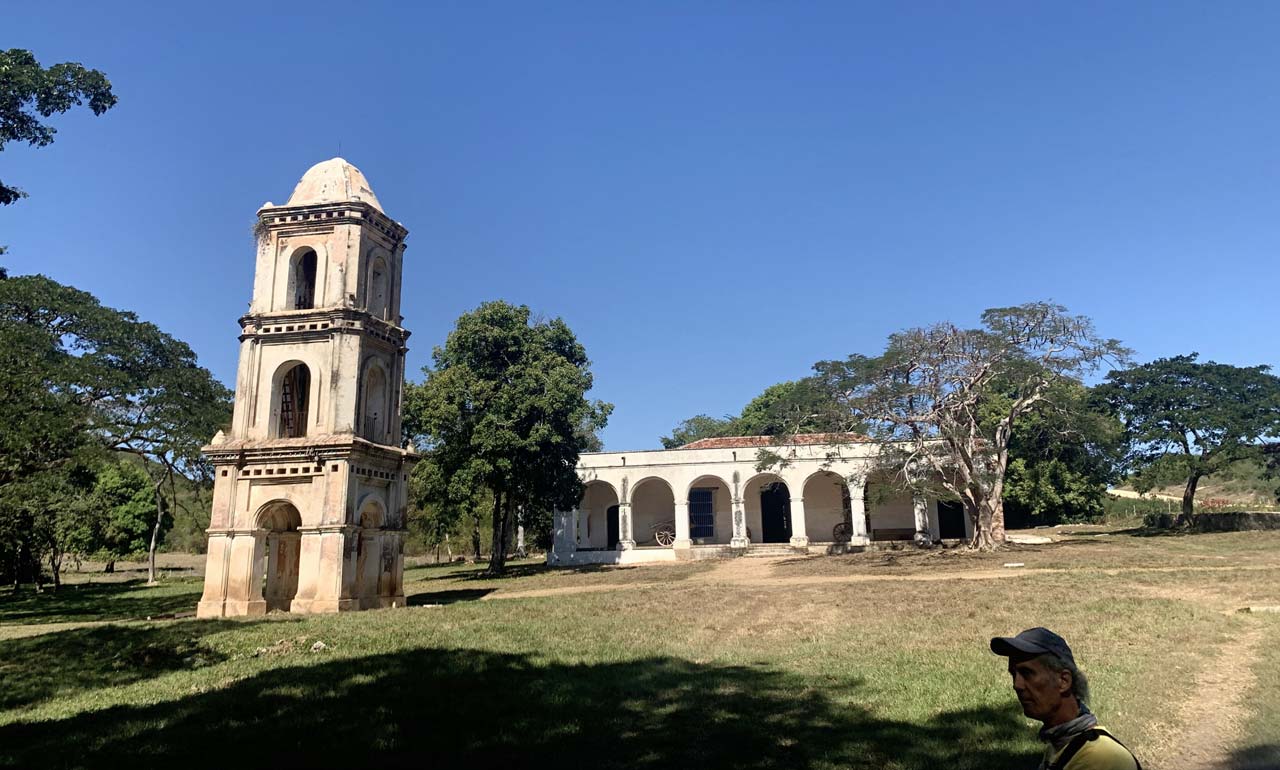 In a minivan, our group happily crisscrossed Cuba to fabulous destinations, courtesy of our guide, Franklin, and driver Alexi. 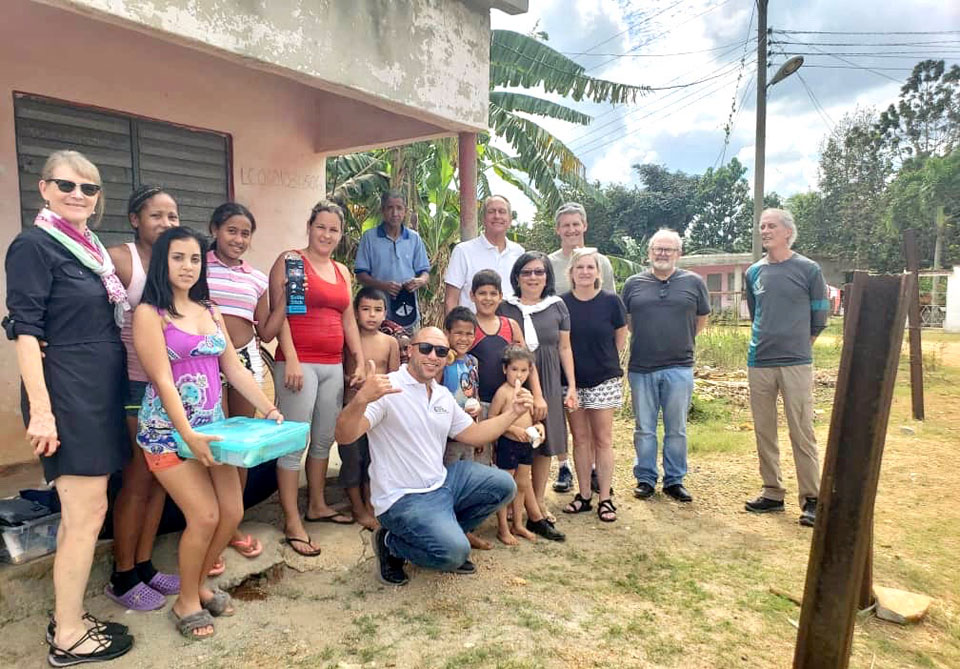 Franklin and Alexi took us to a remote village where we presented the families with donated clothing and household items. 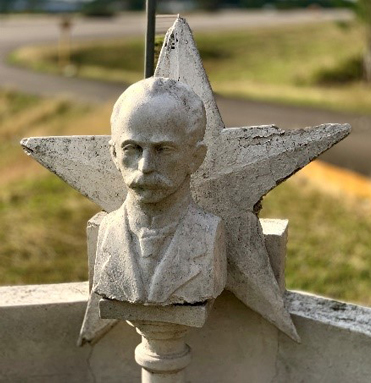 A José Martí roadside marker showed us the way. A poet and journalist, Martí was one of the leaders of the Cuban independence movement from Spain. 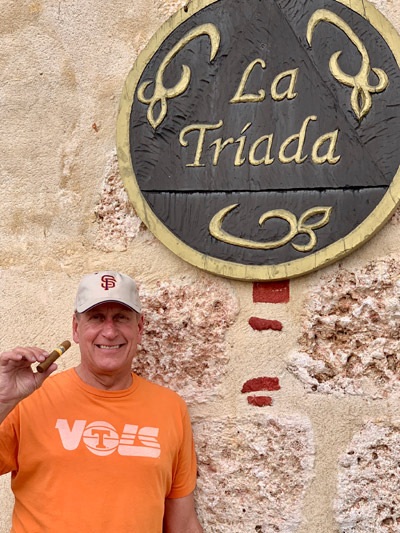