Except maybe for obedient, thrifty and, almost certainly, brave.

As a Boy Scout, after all, I took our Scout Law seriously. Sort of.

In truth, I joined for the campouts.

Ultimately, I rose only to the rank of Second Class, one rung above the lowliest, Tenderfoot.

This was due to laziness and the lack of disciplined focus necessary to earn any merit badges other than the cooking one awarded for building a roaring fire and burning your food on campouts. And I received that badge despite the pancake batter I once concocted; when rolled into balls and aged overnight, it acquired the consistency of flubber, or “flying rubber,” a fictitious material from the movie The Absent-Minded Professor, starring Fred MacMurray. My flubber balls would fly a mile — roughly — when hit with a frying pan.

Of course, we never actually ate any.

Mostly, they were long hikes that ended up at Half Moon Bay, a company-managed recreational site popular with Aramcons. A largely unbroken string of 100-foot dunes curved along the sandy, crescent-shaped bay, many of them diving almost vertically into the water. When we had campouts there in September, the humidity steamed, and the ground — along with our sleeping bags — squished when we awoke in the morning. Everything smelled dank, of mildew. At sunrise, before we actually did anything, we were pouring sweat as if we’d just run a marathon through a rain forest on a hot day.

Sleeping on dunes presented a challenge. If we laid our sleeping bags on the flat-ish summit at night, we would slowly, imperceptibly creep-slide downward while we dreamed, finding ourselves near its base at sunrise. If the dune had a particularly steep incline, we’d sometimes wake up almost in a standing position a few feet from the bottom. “What the …?” 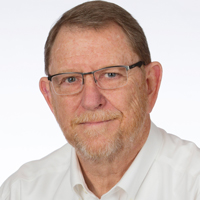