Arrowheads and Shooting Stars in the Deserts of Arabia 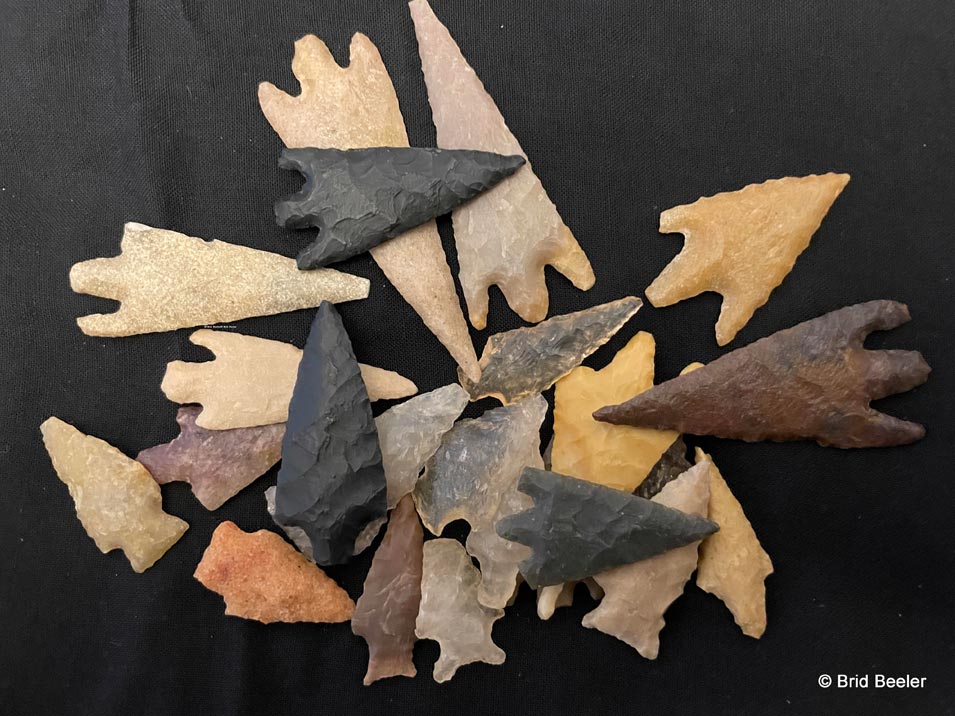 Weekend trips to the desert often involved searching for arrowheads and other primitive stone tools. Finding areas where these were plentiful was never easy because we could go out one weekend and chance upon a promising site, with lots of arrowheads just lying there on top of the sand, some perfectly uniform, others missing tips or barbs. Then, two weeks later, we would return to the exact spot, using GPS coordinates, and not an arrowhead could be seen. We would troll the desert floor over a two-day period yet return to Riyadh empty handed. We couldn’t help but ask, how could this be? Had someone else come along in the meantime, and picked up all the arrowheads? Well, part of the mystery of the desert is how the sands are always shifting with the wind. The shifting sands which expose arrowheads beneath the surface can just as easily cover them again. 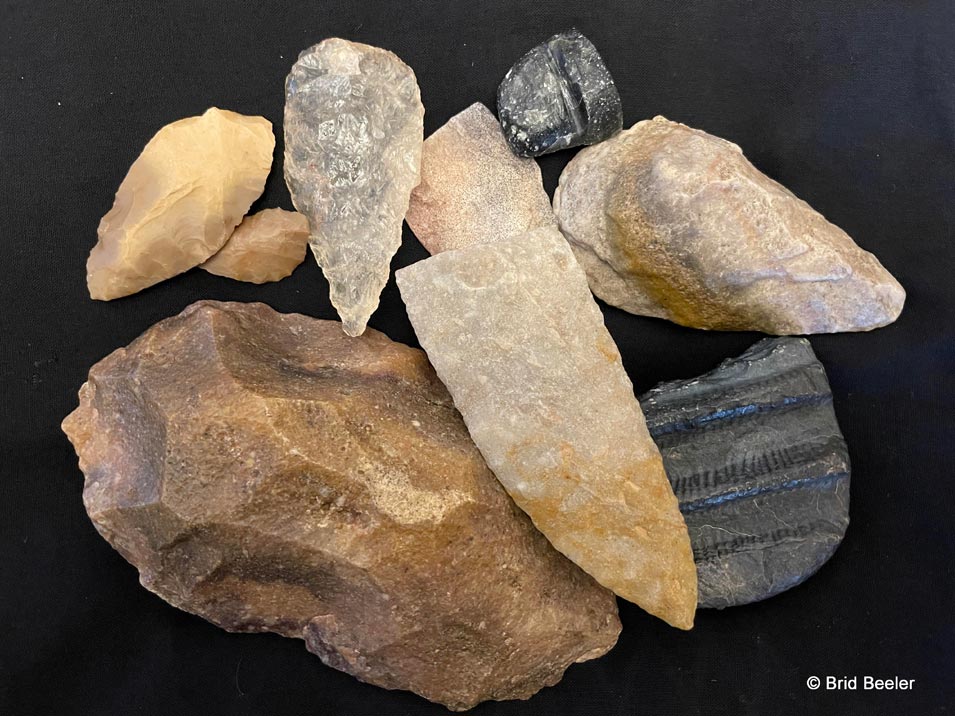 Crossing the desert, you encounter areas where it is apparent that once there was water and life with the remains of a settlement being evident around the edge of an ancient lakebed. In these locations one will often find flint tools used for skinning animals along with arrowheads and the occasional hand axe. I think one of the most surprising of all finds was deep in Ar Rub Al Khali and there sticking up out of the sand was an old grinding stone.

The arrowheads and stone tools we found, date most likely from the Neolithic period some 10,000 years ago and are made from many different types of stone; including flint, chert, obsidian and quartz. The quartz arrowheads look like they are made out of glass and are particularly pretty. Of course, the Arabian Peninsula was a very different place when these arrowheads were made. A recent study of hippopotamus fossils speculates that it was the many lakes and flowing rivers of the Arabian Peninsula that lured early humans to first migrate north out of Africa. 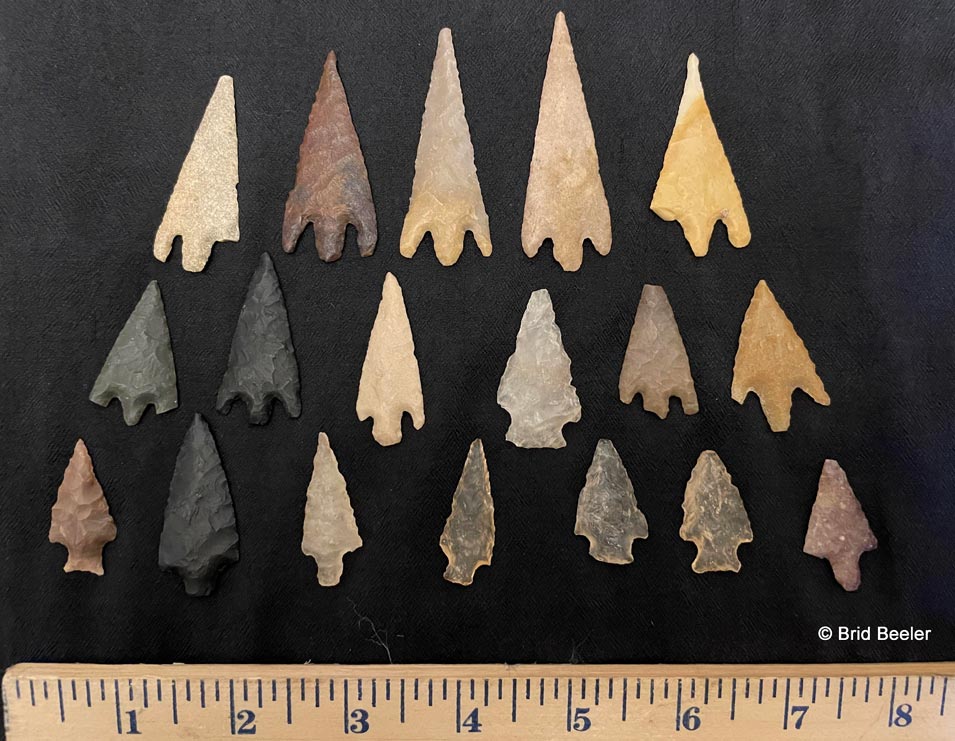 We often found what seemed to be arrowhead ‘factories’ with lots of completed points and chips. You could visualize the maker sitting down and working for days, turning out one point after another. What patience that must have required, and what skill! Many of the arrowheads we found were made using a technique called “fluting” which produced very delicate, thin edges. Judging by all the broken points we found jumbled altogether, very many were probably broken as they were being made. What a disappointment that must have been. After hours of work chipping away at a promising piece of flint, to have the miserable thing break apart in your hands! 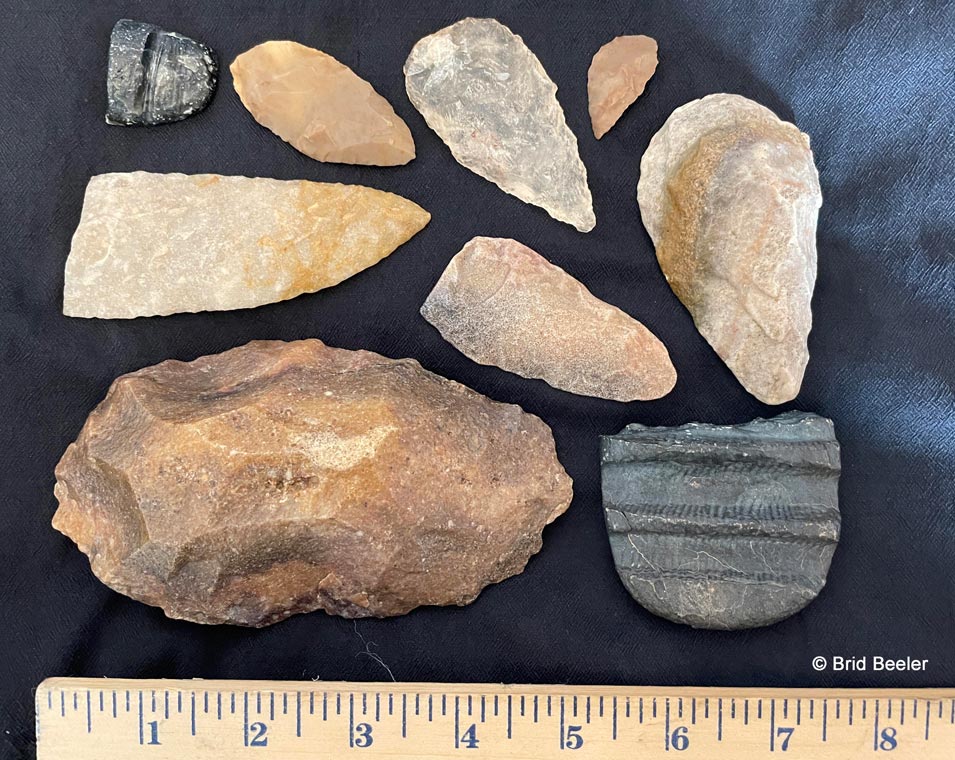 Looking at the arrowheads and tools in our collection I can’t help wondering about the people who made them. Did everyone in the family or group make their own arrowheads, or did one particular member, who had the “knack” specialize in making points for all the hunters in the group? Were these the same people who created the rock art seen all over the Kingdom? Did some specialize in art and others in arrowhead making? Sort of like how I do the cooking and my husband takes out the garbage.

While we often returned to Riyadh empty handed after a stint searching for arrowheads, the shooting stars in the night sky could always be counted on to shower us with vivid memories that more than compensated for our unsuccessful arrowhead search. The desert night sky in the Kingdom is truly a sight to behold. Few places on earth have such space and emptiness devoid of pollution. 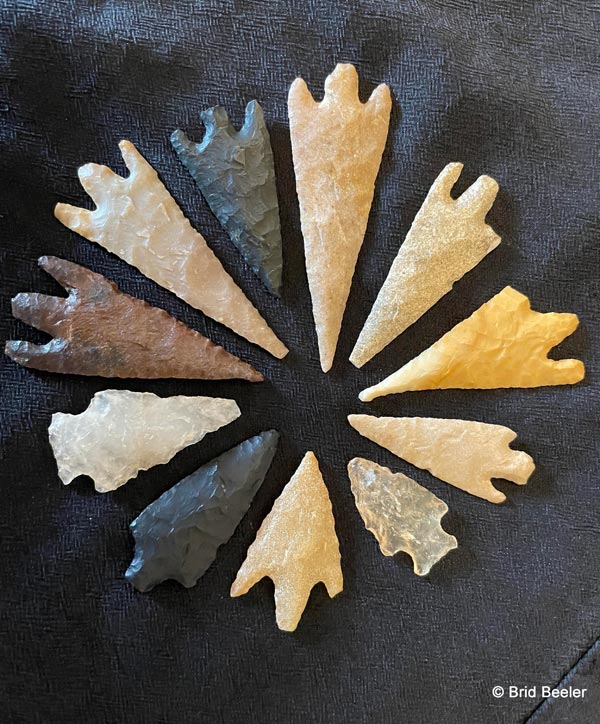 I remember on one occasion, during a Perseid meteorite shower, we all drove out to the desert to sit on lawn chairs on top of a sand dune and stare up into the night sky. The night sky was spectacularly alive and we welcomed each new shooting star with appreciative ‘ooohs’ and ‘aaahs’. The only other sound breaking the pristine silence was the occasional gentle snoring, as various members in our little group drifted off from time to time. The innocence and simple pleasures of that time in the desert still speaks to me deep down in the depths of my psyche. Maybe it was all a bit of madness, but what a sight to behold!