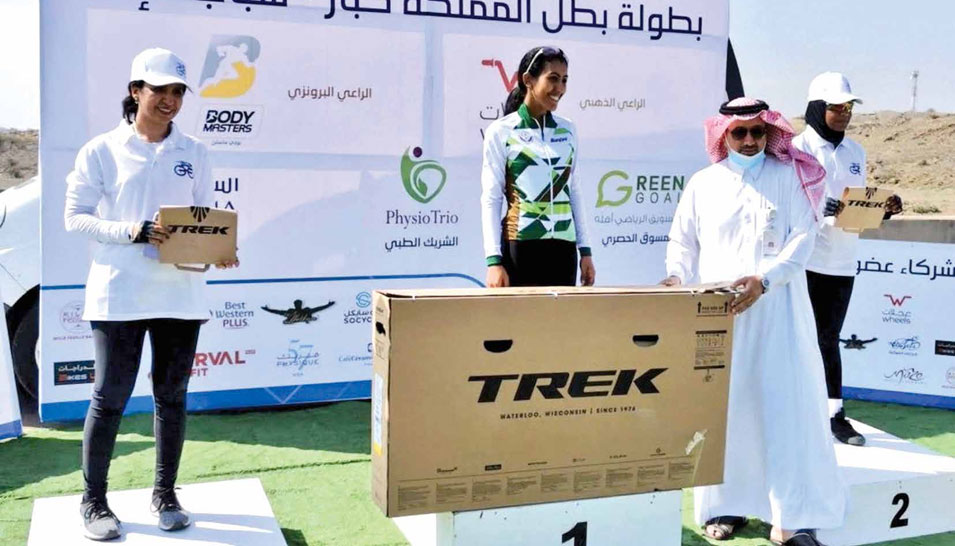 Ahlam Al-Zaid, an Aramco business systems analyst, earmed the gold medal at the first-ever Saudi women cycling championship in the Kingdom this past August. Soaring past her competition, she completed the 13-km race in 22:18 minutes and made history.

After years of hard work and dedication to the sport, Ahlam Al-Zaid, an Aramco business systems analyst, earned the gold medal at the first Saudi women cycling championship this past August.

She made history by completing the 13- km race in 22:18, soaring past nine other cyclists who qualified for the world-class tournament in breezy Abha. The race was organized by the Saudi Cycling Federation.

For Al-Zaid, it began in summer 2018 when she bought her first road bike. She had been feeling uninspired after being forced by injury to quit her beloved crossfit after three years.

And while cycling was exciting, it proved to be a challenge. “When a friend introduced me to cycling, I thought to myself: ‘I like spinning, and I liked riding bikes when I was a kid,’” she said. “But I quickly realized there’s a lot that goes into riding a bike.”

Interest in cycling has been growing steadily in the Kingdom, especially for women. Official figures show that a little more than 1% of the Saudi population cycle on a weekly basis, of which 32% are women.

However, the COVID-19 pandemic has led many organizations to postpone or cancel races and events this year.

“2020 has been tricky for everyone,” said Al-Zaid, noting athletes cannot be at their top fitness level all year round as they generally have a building phase that allows them to peak for scheduled races. “The (national championship]) was technically off season, because we don’t usually have races in the summer.”

During lockdown, Al-Zaid practiced on her indoor trainer. “It was a blessing and a curse,” she said. “I spent hours training indoors, but it was also a curse, because I wasn’t able to enjoy being outside while riding; it’s the ultimate stress reliever.”

To qualify for the national championship, women riders participated in a virtual race on indoor trainers, which monitored their vital signs. The athletes were also asked to set up a camera for the judges to ensure the integrity of the race.

“A lot of the pro races happened virtually this year,” said Al-Zaid. “You have to worry about different things like your connectivity and whether your equipment is working. It’s similar to a real race, but you’re doing it from your home.”

Al-Zaid won the virtual race and began preparing for the final tournament in Al Mahalla, Abha. Her training would take her to Al Baha, where she stayed for three weeks to acclimate to elevation.

“I was confident but worried at the same time,” said Al-Zaid. “You never go into a race 100% believing that you’ll win but I did the hard work, and I had a huge support system around me so I couldn’t think of not winning. I had to go and give it everything I had.”

To comply with COVID-19 precautions, the race was modified to keep riders one minute apart from each other — an individual time trial race that is often dubbed “the race of truth” because it doesn’t allow riders to employ tactics for gaining momentum or slowing down others.

“I was overwhelmed by the reaction I received,” she said after winning. “I didn’t know anyone would appreciate what it means that we had the first championship. I thought only the cycling community would celebrate this event, but I got a huge reaction.”

Tthe Mentality of A Winner

Al-Zaid has recovery weeks where she trains for five to six hours, and other weeks she trains for up to 15 hours. But she believes building fitness is half the battle. “What your mind believes you can do is a big part of cycling,” she said. “You can easily give up and say my legs hurt — of course your legs will hurt! But if your mind is not strong enough to push through that pain, then you’re going to give up and retreat instead of pushing yourself to the end.”