Aramco Retiree Golf Group Teed It Up in Phoenix, Arizona

The Aramco Retiree Golf Group held their sixth overall and first 2022 event in Phoenix, Arizona at Sheraton Grand Wild Horse Pass Resort March 28 – April 1, 2022. It was a fun filled 5-days of activities including 3 rounds of golf at Whirlwind Troon Devils Claw and Cattail golf courses. The evenings included an “Ice Breaker” Monday night at the Sheraton Grand Lobby Bar area onsite, Tuesday dining at Ko’Sin restaurant onsite, Wednesday dining onsite at the Kai, the only AAA Five Diamond and Forbes Five Star restaurant in Arizona, and Thursday open night with most folks dining at either Ling and Louie’s Asian or Prime Steakhouse restaurants located in the nearby Gila River Resort and Casino.

The Sheraton Grand resort is artfully designed to be an authentic representation of the Gila River Indian Community's heritage and culture, the architecture, design, art and legends of the Pima (Akimel O'otham) and Maricopa (Pee Posh) tribes are celebrated in every detail at the resort. The group was able to experience world-class dining at the hotel restaurants, proudly serving classic Native American cuisine at Kai and Ko'Sin. The two championship, 18-hole golf courses featured natural landscape challenges with beautiful desert vistas. The group endorses the Sheraton Grand Wild Horse Pass in Chandler, AZ as an excellent place to stay if you are visiting the area.

There were 27 non-golfers and 27 golfers totaling 54 attendees that included (see photo below): 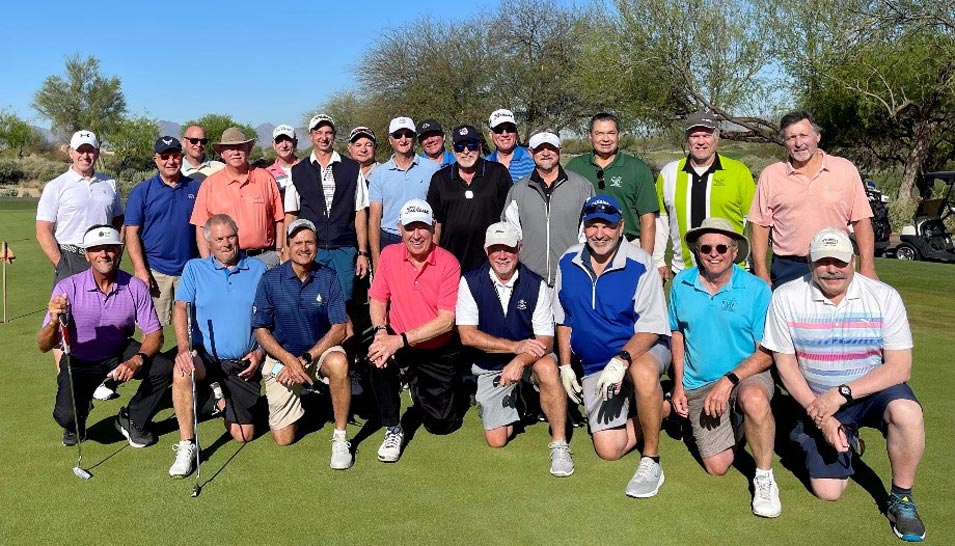 The overall 3-day winners were Pat Finochio (first place), Mel Knotts (second place), and Jon Grosch (third place). This was Pat’s first appearance on the tour and the Handicap Committee will be looking forward to his next appearance. Mel and Jon are usual recipients of winning at these events so are well documented.

The weather was absolutely beautiful for the week with mostly clear blue skies, 60° and 70° Fahrenheit temperatures, low wind and dry conditions. Definitely a great place to visit during the early Spring.

Mickie and Mike Haas arrived a day early in order to meet with the Sheraton staff to review the facility venues including restaurants for the group events and to meet with the Whirlwind Troon Golf Course Tournament Coordinator to go over golf tournament formats, payouts and logistics. It was a great opportunity to meet with local residents Michele and Bruce Taylor (see photo below), L to R at their beautiful home, Colorado “Snow Birds” Laura and Jerry Renaud, Mickie and Mike Haas, and Maine “Snow Birds” Abby and Rick Oropeza. 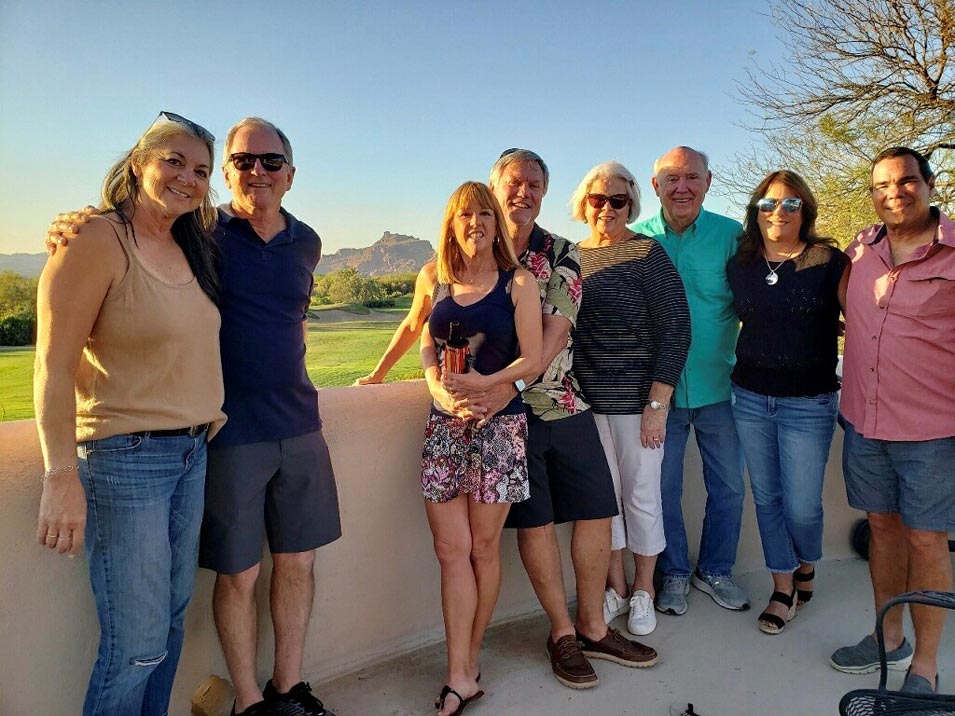 The Monday night Icebreaker held at the spacious Sheraton Lobby Bar with large glass plate windows to view the setting sun over the mountain range was a great opportunity to reacquaint ourselves with old friends we had not seen in years. There were 23 first-time golfers and non-golfers that joined the tour this trip. 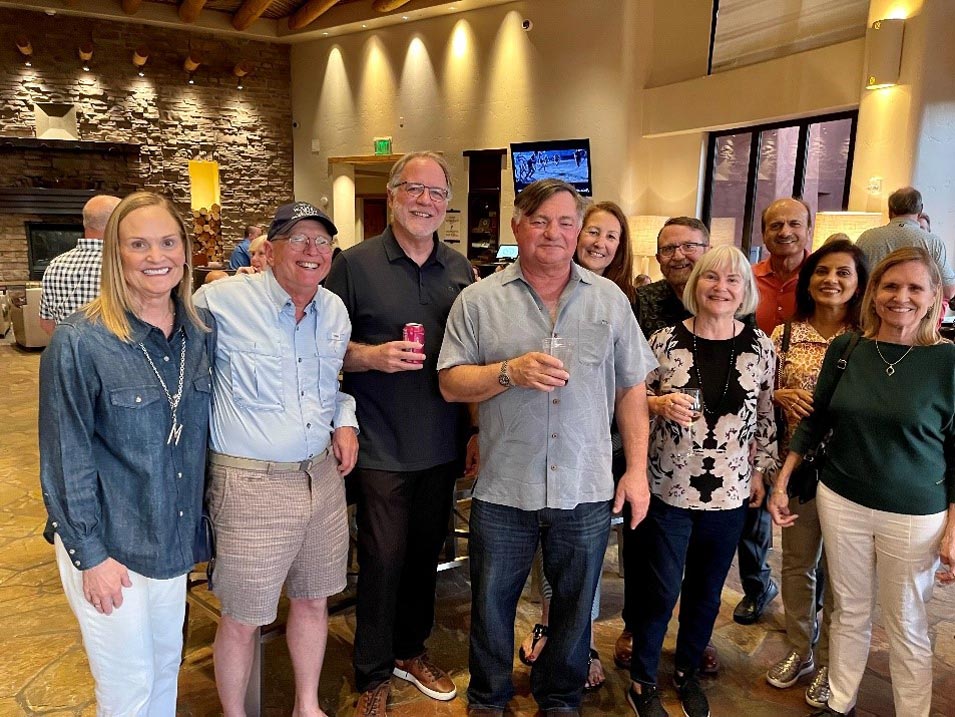 The Tuesday first-round golf competition was held at the beautiful Whirlwind Troon Devils Claw golf course. The competition format was Stableford and both Andy Thompson (L - see photo below) and Pat Finochio (R) tied for first place with 38 Stablefords points, two under par. Mike Haas (Center) announced the winners and distributed the winnings to Andy and Pat along with other low Stableford, best two-ball team Stableford and nearest the pin winners. 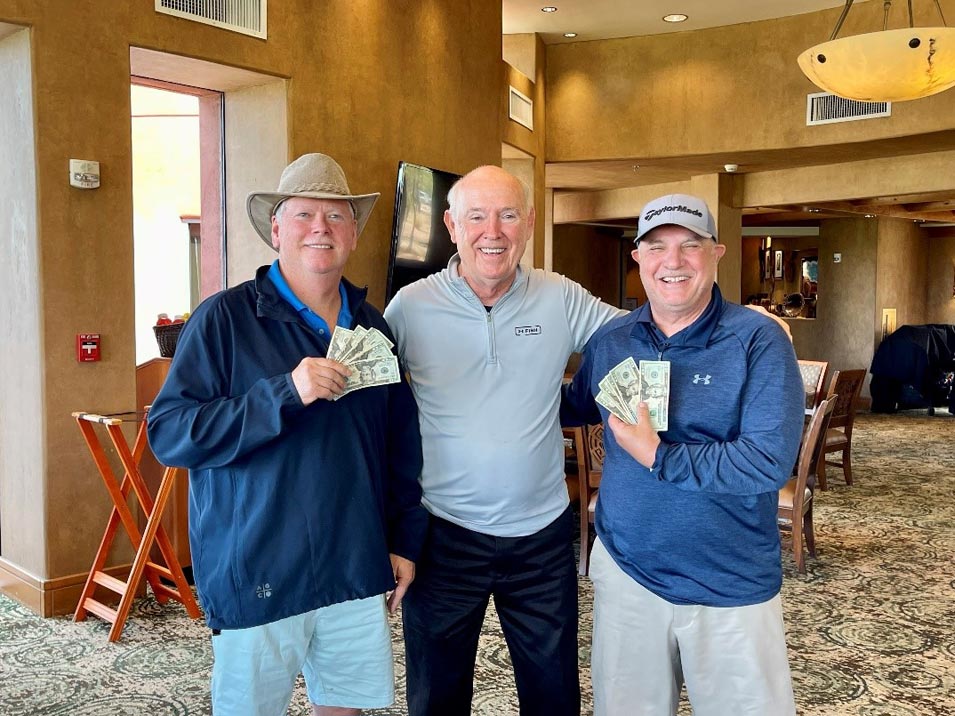 A special tribute was paid to our good friend Christian Zuninga who passed away about one year ago. Shown below L to R, Kelly Pierson, Saleh Al Thenayan and Pat Finochio were great friends with Christian and played all the time together while living in Dhahran at Rolling Hills Golf Course. I remember sitting on the outside veranda at El Chico Mexican restaurant in Dhahran and watching that foursome finish on Hole #9. Kelly, Saleh and Pat played together and it was an opportunity to visit and reminisce about their time together with Christian in Saudi Arabia.

This was also an opportunity to remember Norm Betts who passed away and to have a toast for both Christian and Norm, who were great friends of ours and golf companions. 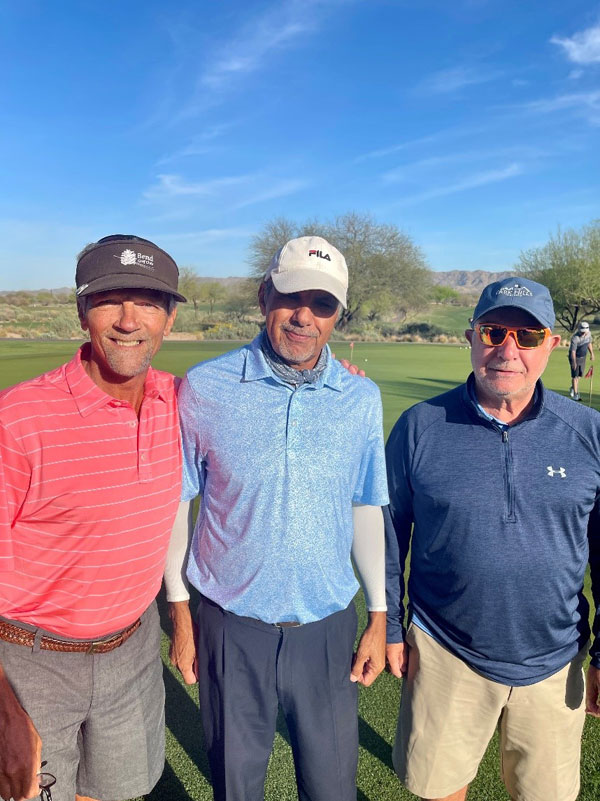 The weather was beautiful for the week and below is one of the groups teeing off for Wednesday’s round at Whirlwind Troon Cattail golf course. L to R, Tahir Bukhari, Rick Sutton, Kelly Pierson and Jon Cavanaugh. Jerry Renaud won first place with 37 Stableford points, one under par, and Mel Knotts was second with 36 Stableford points, even par. Coincidentally, Jerry and Mel were on the same team with two others, Thomas Hogan and Jon Grosch, so they easily won team first place. 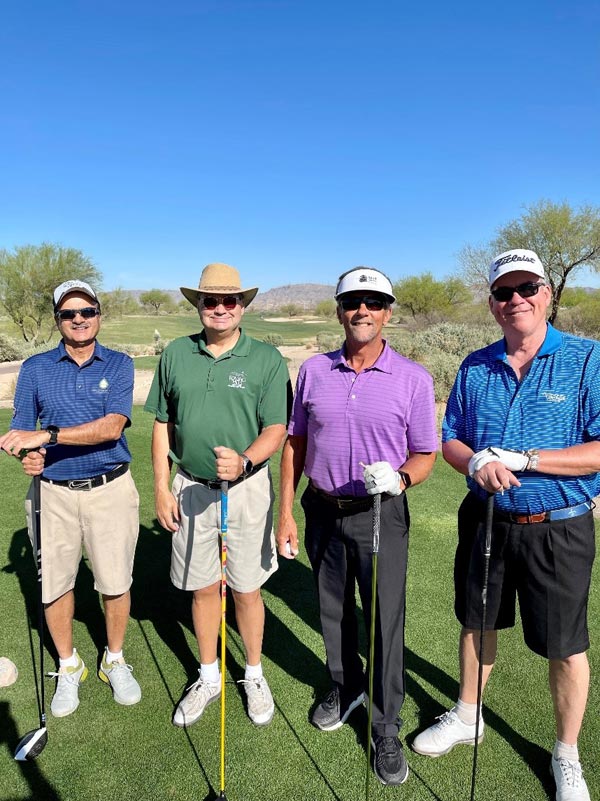 Below is one of the teams teeing off for Thursday’s round at the Whirlwind Troon Devils Claw golf course, L to R, Saleh Al Thenayan, Andy Thompson, Thomas Hogan and Gregg Skinner. 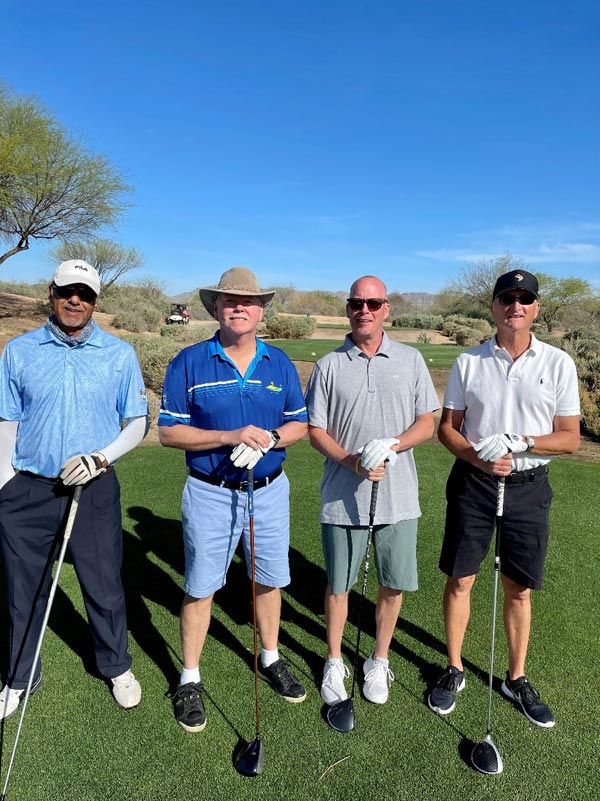 The format for Thursday’s round was a Scramble and there were six 4-person teams competing. Below is the winning team, all wearing colorful golf shirts, L to R, Tahir Bukhari, Don Padgett, Shaan Bukhari and Mel Knotts. The team shot 13 under, a new tour record.

Shaan flew in from New York to play golf one day and to hike down to the bottom of the Grand Canyon with his dad Tahir and back to the top in one day covering 32 kms in 11 hours 41 minutes and burning 3,444 calories. 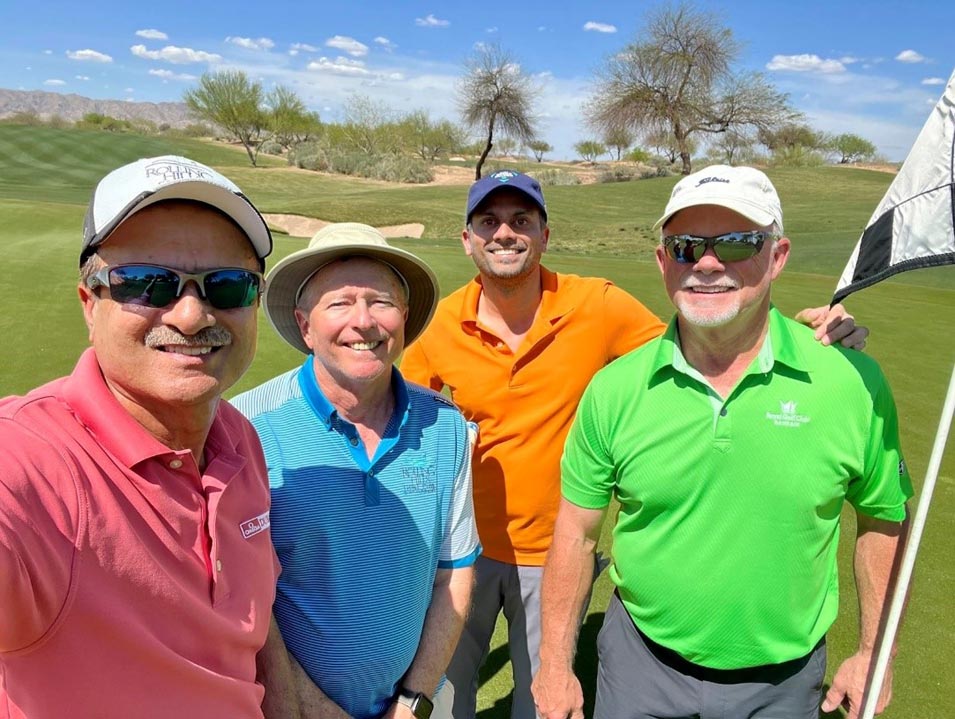 The winning Scramble team was very excited when Don Padgett hit his approach shot on Devils Claw course Hole #14 to within 6 inches of the flag with a “kick in” birdie for the team. However, if Don had made that rare hole-in-one golf shot, he would have benefitted from every player awarding him with $25 each. But then Don was going to be obligated to buy everyone their beverage of choice after the round so probably a break-even proposition, but as the Mastercard TV commercial says, “priceless moment”. 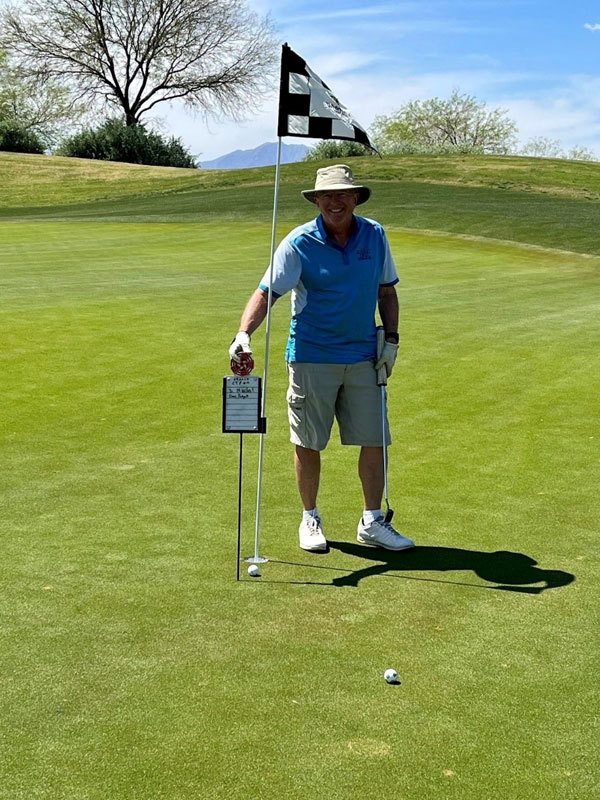 The group gathered for one last night at happy hour to say their goodbyes and exchange promises to keep in touch. This part of the group included (see photo below) L to R, Jeff McHone, Mike Haas, Monty Gilleland, Robin MacDonald and Rick Weidel. 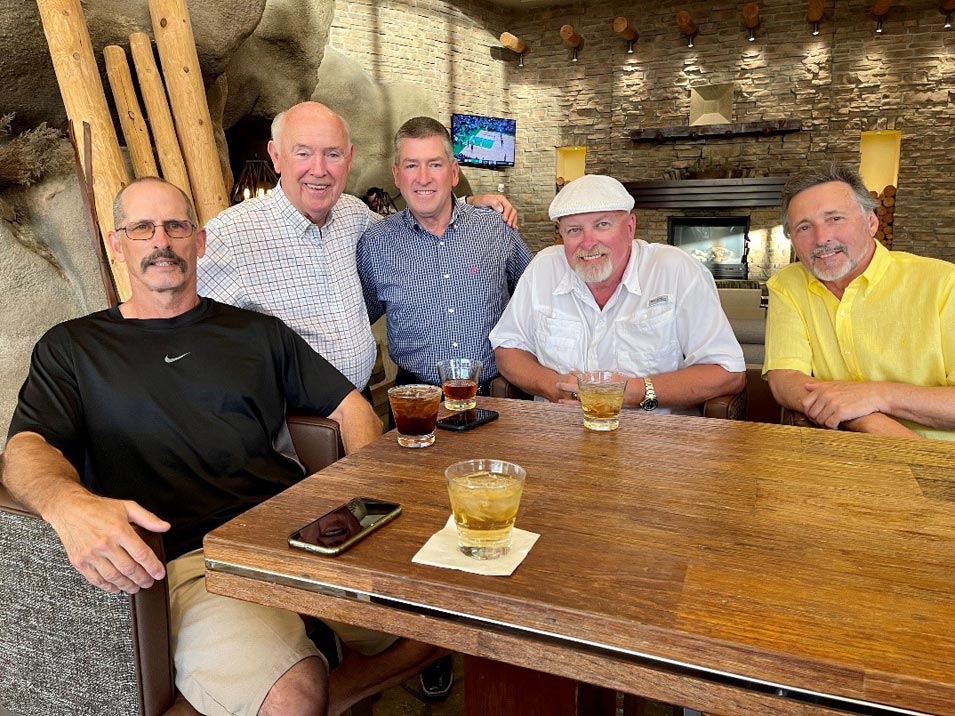 Golf seems like a very tame sport walking around a beautiful, lush, green golf course, hitting a small, white golf ball until you knock it into the hole, and then moving on to the next hole until you finish 18 holes. However, one of our groups happened upon a large rattlesnake that was being corralled and displaced to a new home. After that photo was circulated within the group, we were all very reluctant to enter the rough looking for wayward shots. 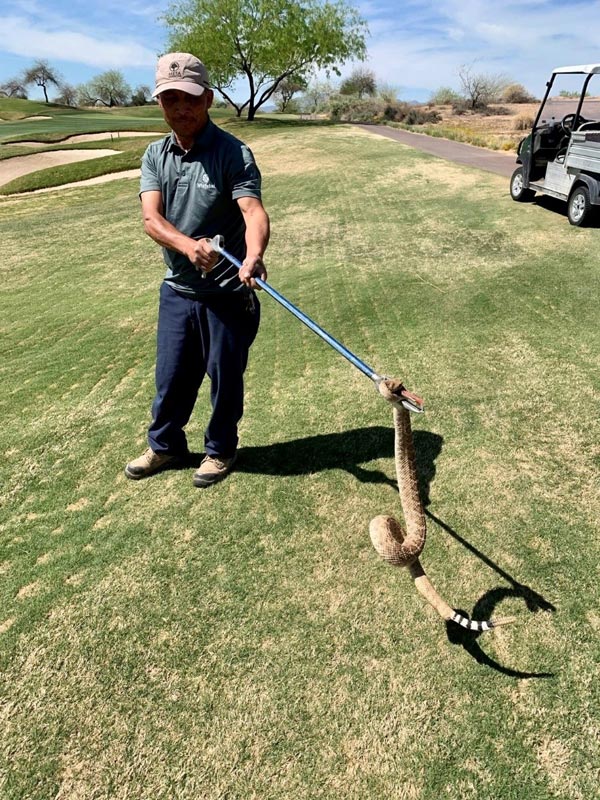 The non-golfers had many activities to participate in during the day when their spouses were playing golf. On Thursday, a large group of women went to the Dale Chihuly in the Desert display at the Phoenix Botanical Garden showcasing stunning, large-scale installations nestled among the gardens. 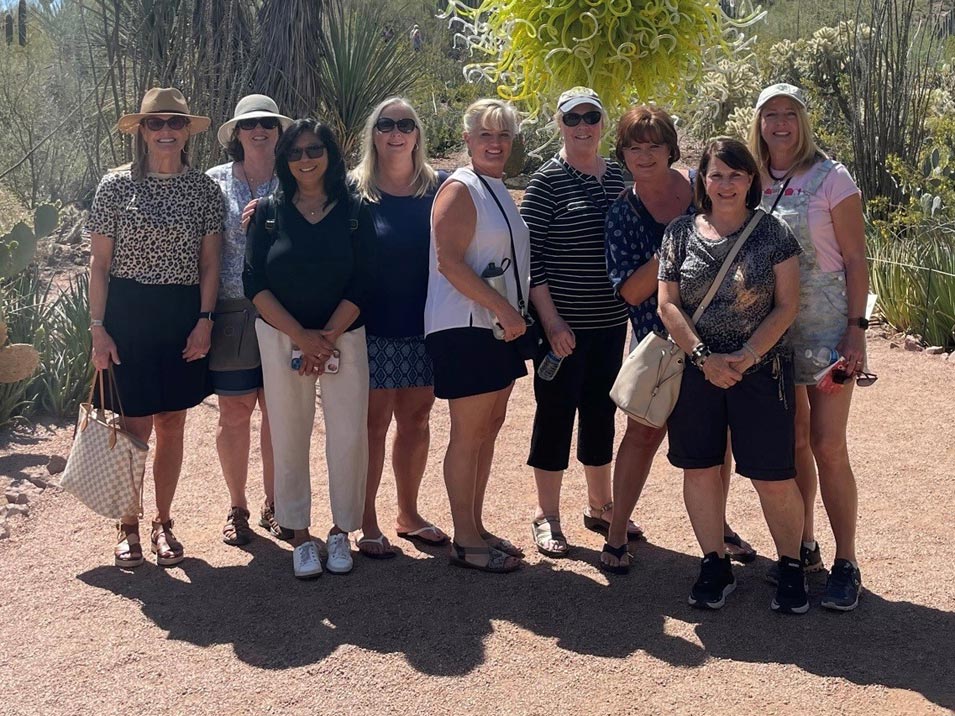 These Aramco Retiree Golf Group events are a great opportunity to spend time with our retiree friends and guests who traveled long distances to play golf and visit. The golfers always have lunch together after the round, announce the winners, hear commentaries about this and that shot, and settle up with the winners. 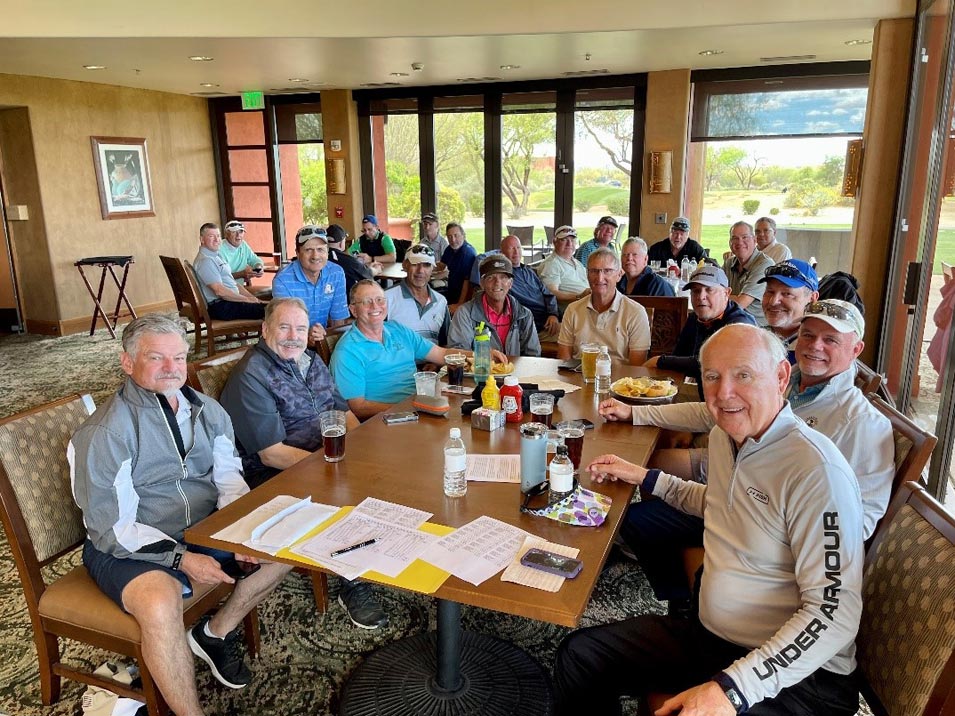 The next event in the Fall is being discussed with details to follow. I am always interested in hearing about great places to meet and play golf so let me know if you have any suggestions. If you are interested in being included in the communication database, please contact Mike Haas at mdhaas@attglobal.net, mdhaas51@yahoo.com or call cell (361) 257-5933. If you are interested in getting in contact with any of the players, please send me your contact details and I will pass it along to them.