The Aramco Retiree Golf Group held their seventh overall and second 2022 event in Myrtle Beach, South Carolina at the Marriott Myrtle Beach Resort & Spa at Grande Dunes, October 3-7, 2022. It was a fun-filled 5-days of activities including 3 rounds of golf at The Players Club, Barefoot Resort’s Love, and Myrtlewood Palmetto golf courses. The evenings included, Snooky’s on the Water Sunday night for seafood with the early arriving attendees, the “Ice Breaker” Monday night at the Marriott Oceans Blue Bar & Lounge, Tuesday dining at Oceans at 82nd restaurant, and Wednesday and Thursday open for dining with old and new friends. There was always a group that stayed on at the Oceans Blue Bar every night recounting the day's golf and catching up with life in retirement.

It was risky scheduling an event on either the Gulf of Mexico or Eastern Seaboard, USA during hurricane season but thought October 3-7 would most likely be safe. There had been no hurricanes that hit the USA all season until Hurricane Ian decided to pay a visit to South Carolina. The photo below shows how the Category 1 hurricane came directly over Myrtle Beach 4 days before the first round. The trip co-host Johnny D’Angelo’s home was directly in the storm’s path with the eye of the storm passing directly over his home. Fortunately, personal injury and damage were limited in Myrtle Beach. After the storm passed, the weather was absolutely beautiful for the week. We all enjoyed Carolina blue skies with temperatures ranging between high 50s at night and high 60s during the day with low wind and dry conditions. We were very lucky! 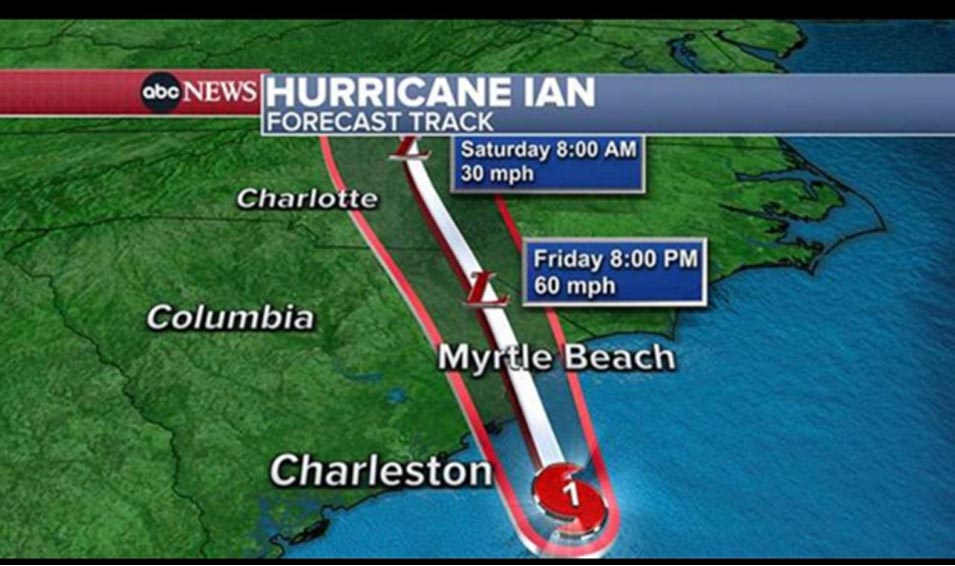 Mickie and Mike Haas arrived a day early to meet with Johnny D’Angelo (AKA Johnny D’), who lives in Myrtle Beach and co-hosted the event along with visiting the golf courses to review the logistics, tournament format and after-golf facilities for refreshments and scoring. It was also a great opportunity to meet with the other “early birds.” Ken Pitts recommended Snooky’s on the Water for our evening meal. The restaurant had just re-opened after Hurricane Ian and we all enjoyed this local favorite spot for fresh seafood. 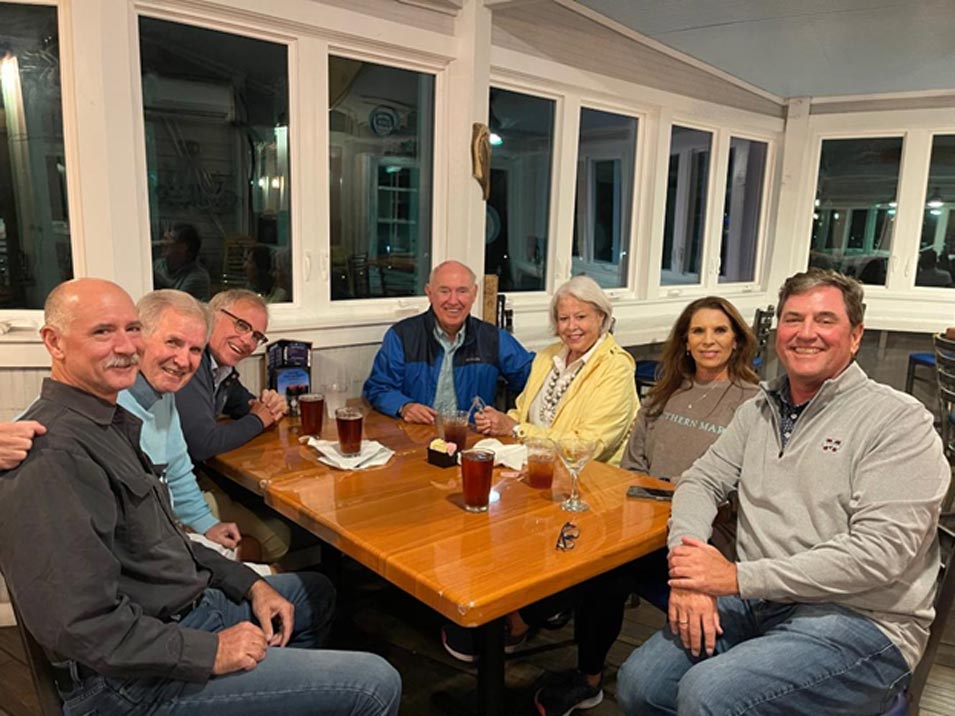 The Monday night Icebreaker held at the Marriott Ocean Blue Bar & Lounge was a great opportunity to reacquaint with old friends and meet new ones. There were 15 non-golfers and 22 golfers totaling 37 attendees that included (see photo below): 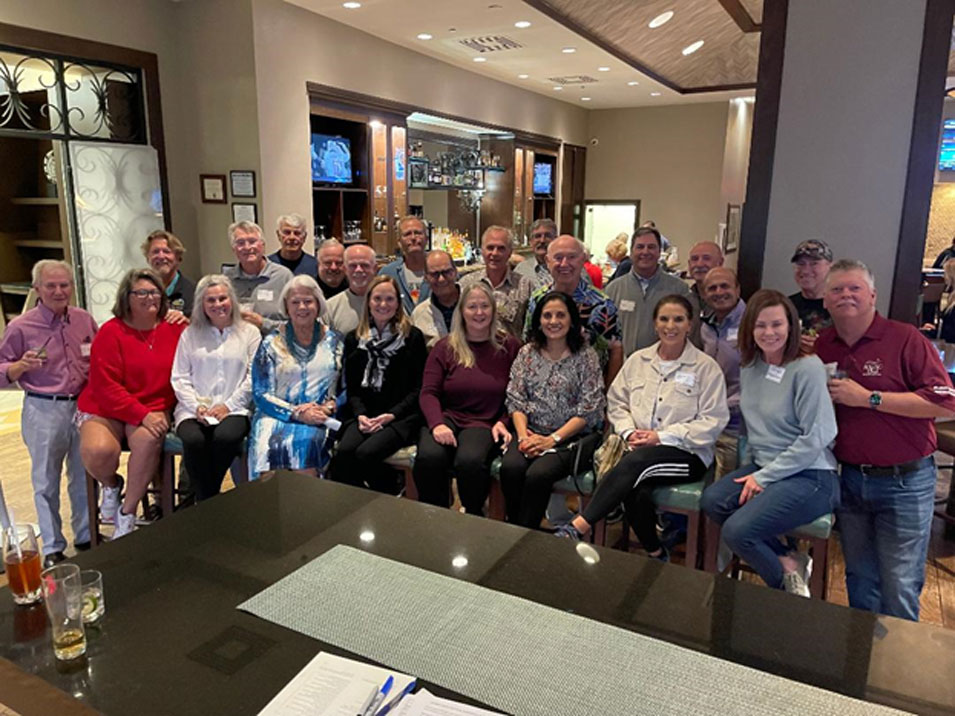 It is amazing how friends from Saudi Aramco days can reunite after years and just pick up on their friendships like nothing changed.

The photo below includes from L to R: Ray Woods who traveled from the UK to attend, Tahir Bukhari, Paul Titley and Mike Taylor. 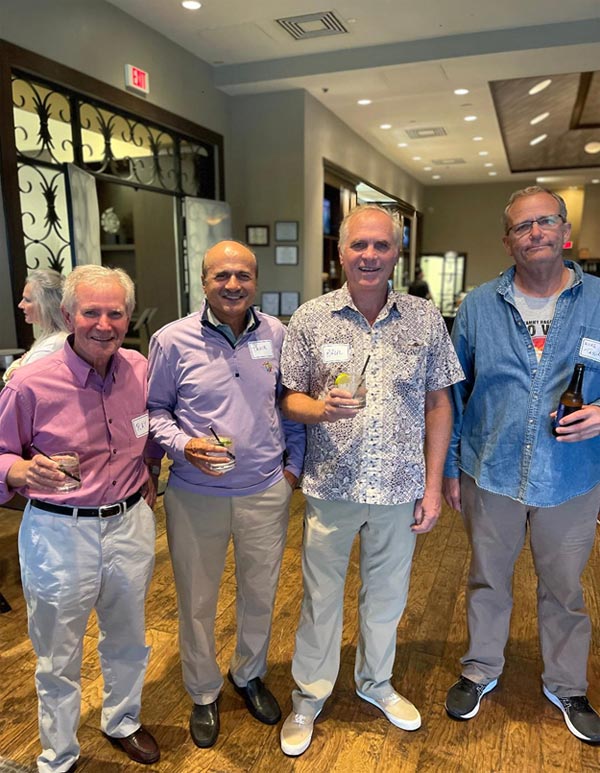 Tuesday’s first round of competition was held at the beautiful, but challenging, The Players Course (TPC). Johnny D’ is a member at TPC so I made sure we were grouped the first day so our team could capitalize on his course knowledge, but unfortunately, that strategy did not work. The competition format was Stableford and Andy Thompson was first with 40 Stableford points, Troy Thompson second, Mel Knotts third and Doug Melton fourth. Prizes were also distributed to the first and second-best two-ball total net Stableford score per hole teams and nearest the pin winners for all the par 3’s. Andy had his handicap cut by two strokes due to his outstanding score but that did not deter him from winning more the next two days.

The photo below from TPC round includes Tyler Goldberg (Monty Gilleland’s guest), Mel Knotts, AbdulAziz Al-Khayyal and Ray Woods. AbdulAziz and his wife Virginia traveled all the way from Saudi Arabia to join the group and it was a treat to see both of them. As many will remember, AbdulAziz Al-Khayyal was extremely supportive of the Rolling Hills Golf Club which has become a recreational center piece for Dhahran. 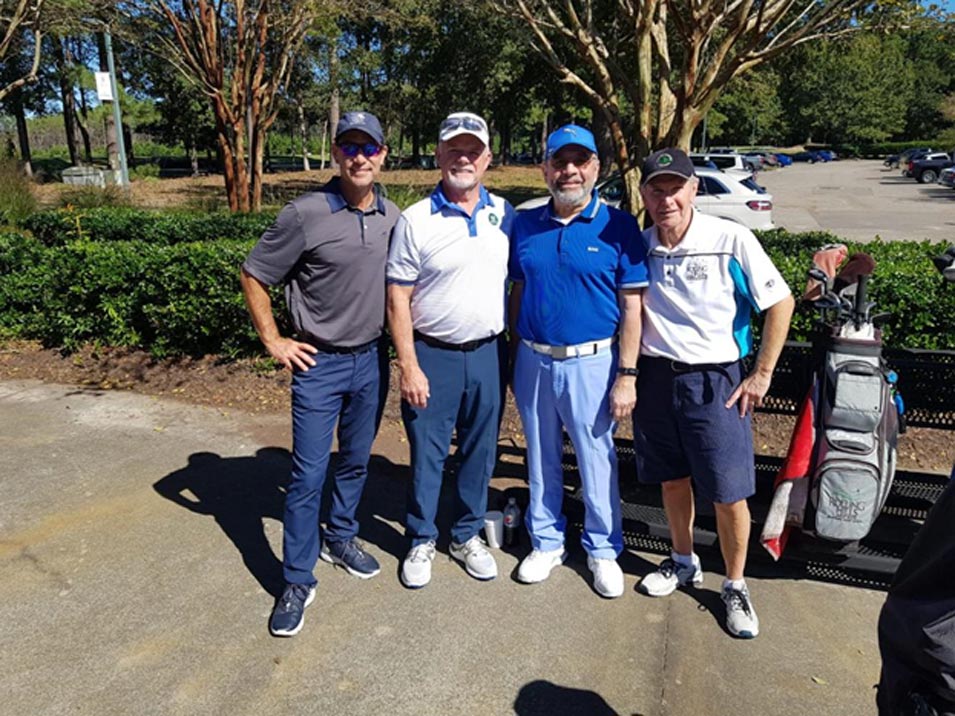 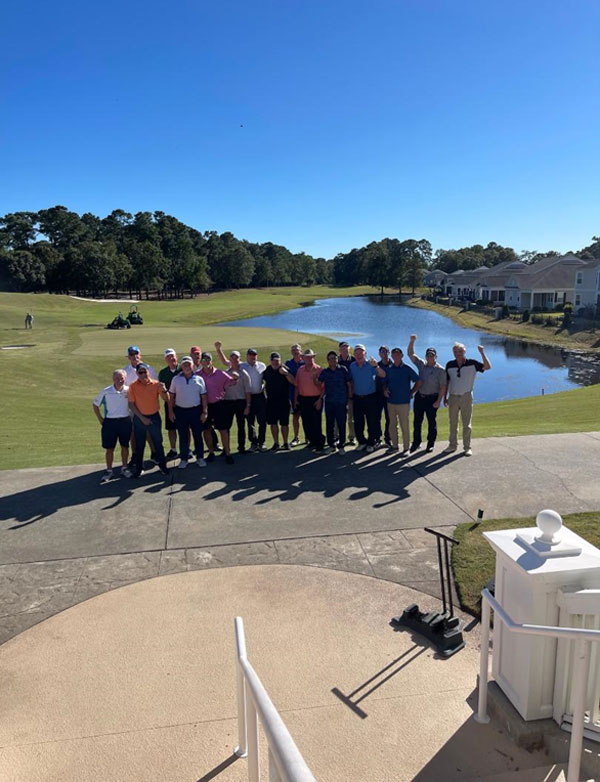 The group met every evening at 6 pm in the Ocean’s Blue Bar & Lounge to relive the day's golf, including making and missing important shots.

Photo below from L to R: Barry and Kerri Wethington and Cathy and Andy Thompson. Funny, but found out Kerri graduated from the same high school as Mickie and I in Corpus Christi, Texas, but, of course, a number of years later than us. 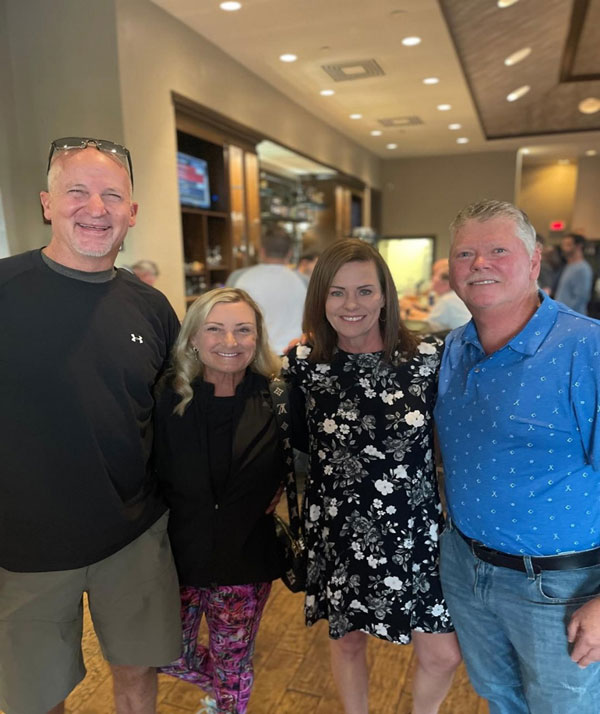 The weather was beautiful for the week and the photo below shows a number of players getting ready to tee off Wednesday at the Barefoot Resort Love golf course. 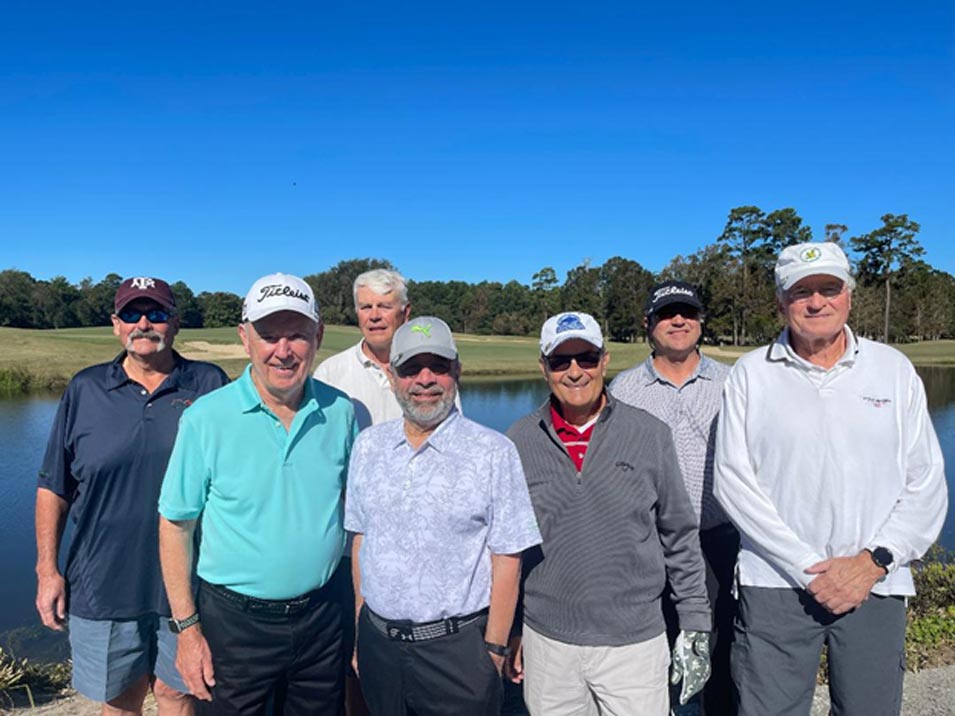 On Wednesday at the Barefoot Resort Love golf course, Troy Thompson and Doug Melton tied for first place with 39 Stableford points, followed by Mel Knotts and Andy Thompson. The team of Thompson brothers, Tahir Bukhari and Doug Melton scored a new tour record of 97 Stableford points for their two net best ball Stableford scores per hole that beat the second-place team by 11 points. Troy retired recently from Saudi Aramco and needless to say his golf game is in tip-top shape.

Photo below from L to R: Troy and Andy Thompson 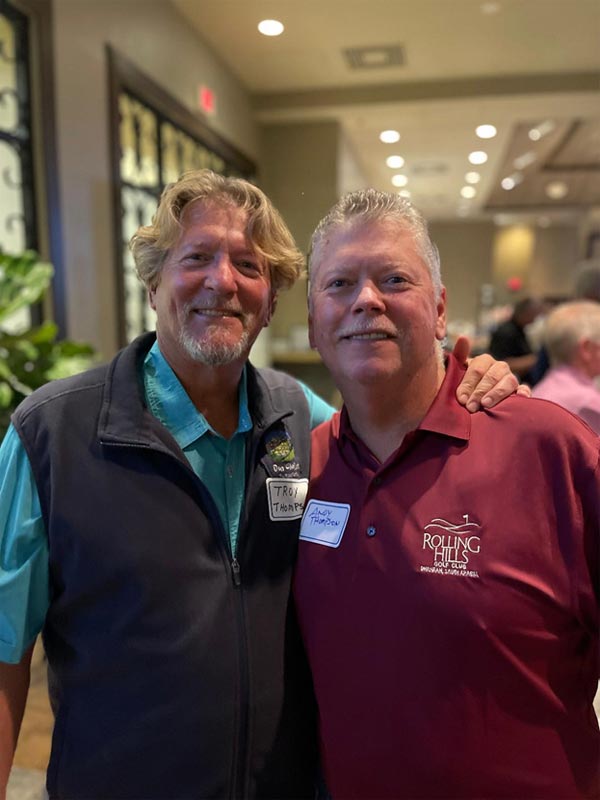 The ladies had a great time getting together for breakfasts, a day trip to nearby Charleston for lunch and shopping around the French Quarter, visiting Barefoot Resort for dining and shopping, walking on the Atlantic Beach and enjoying the pool area. The Myrtle Beach area has lots of interesting attractions for the non-golfers. 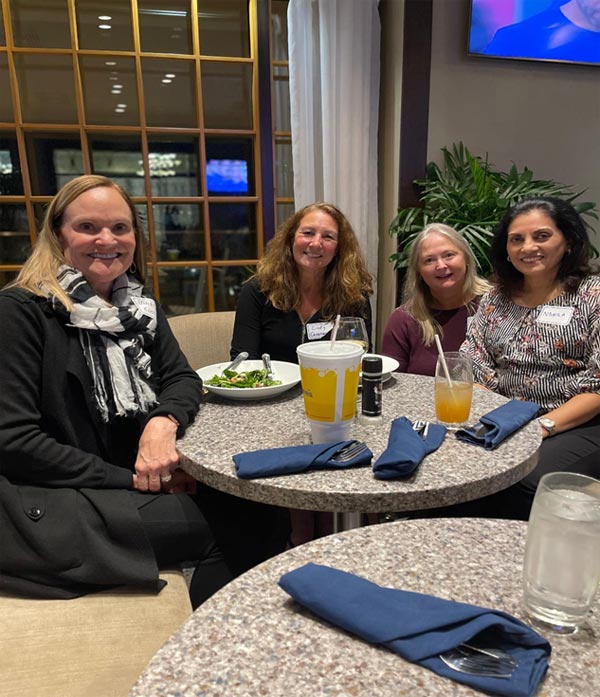 The Thursday round at nearby Myrtlewood Palmetto golf course was a scramble that was won by a 3-person team captained by Ken Pitts with Robert Ross and Ron Auflick, with an 8 under par score. The rules for the 3-man team were modified, but the winning team still prevailed. Mel Knotts, Tahir Bukhari, Kerri and Barry Wethington won second place with a 6 under par score. The scramble was a relaxing format for the final day of play.

Photo below from L to R,  Mike Auflick, Troy Thompson and AbdulAziz Al-Khayyal stopped at the Palmetto course first hole to take a picture on the Intracoastal Waterway that showed the distance to both Miami and New York. 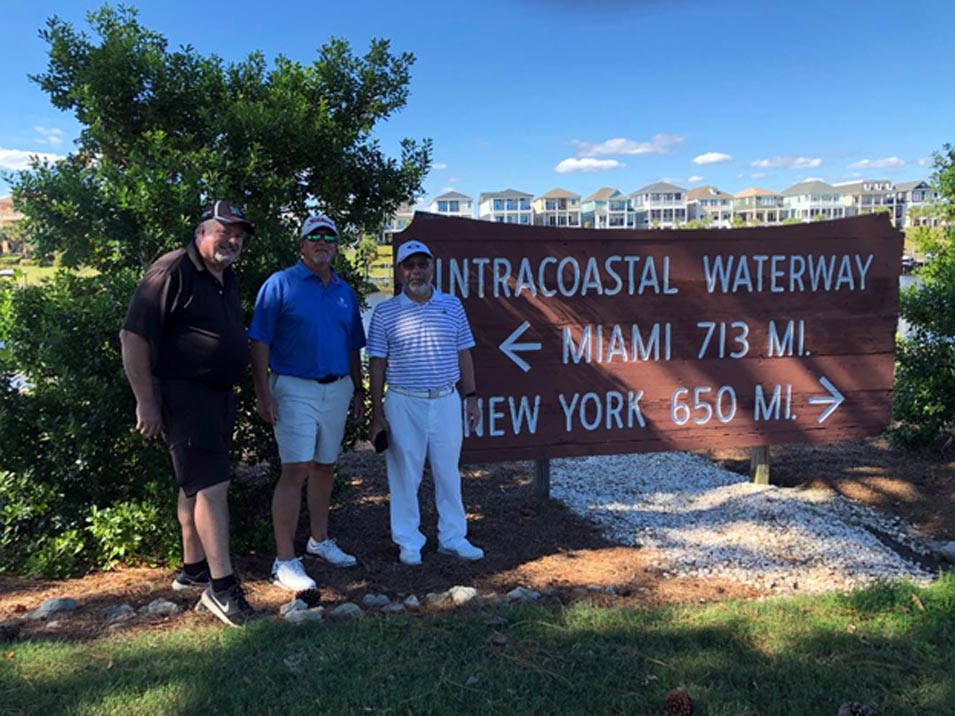 Johnny D’Angelo is enjoying his retirement years and tools around in a beautiful high-performance royal blue Ford Mustang. AbdulAziz Al-Khayyal is shown getting ready to take the car for a spin. I wonder if AbdulAziz can get one of those sportscars over in the Eastern Providence. 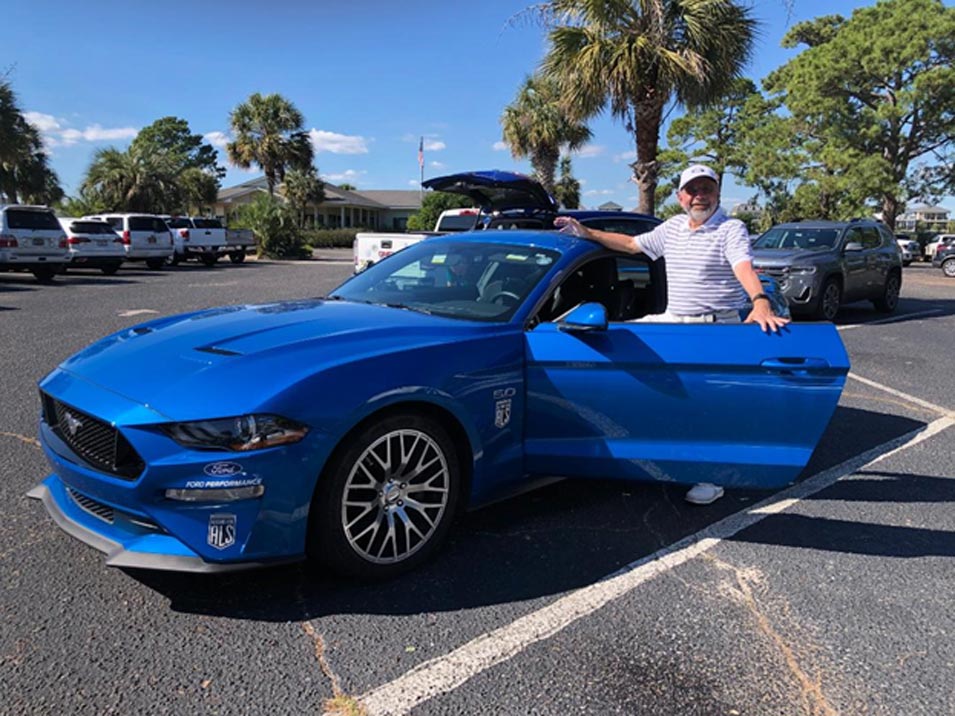 The group gathered for one last night at happy hour to say goodbye with promises to keep in touch. Photo below from L to R: Robert and Susan Ross, and Tracy and Troy Thompson. 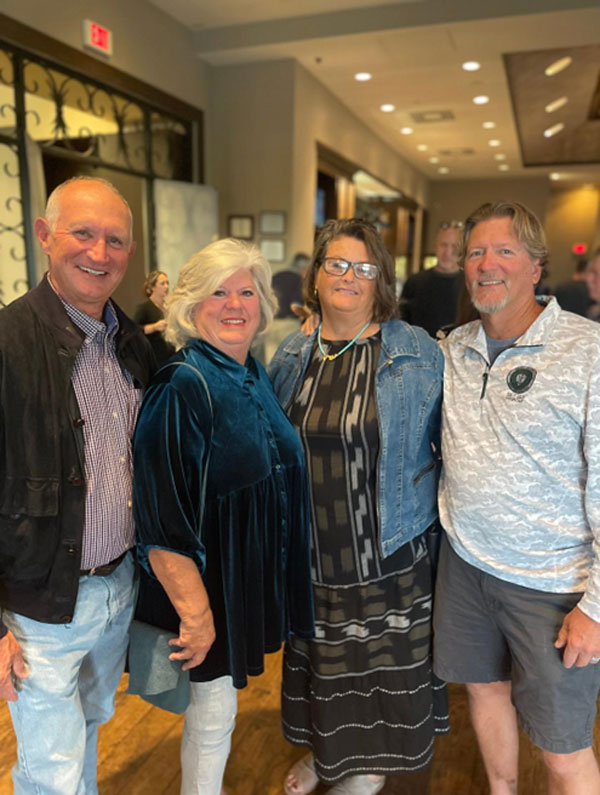 These Aramco Retiree Golf Group events are a great opportunity to spend time with our retiree friends and guests who traveled long distances to play golf and visit. The golfers always have lunch together after the round, hear commentaries about this and that shot, and settle up with the winners. They are a great time to unwind and visit with our Saudi Aramco retiree friends. 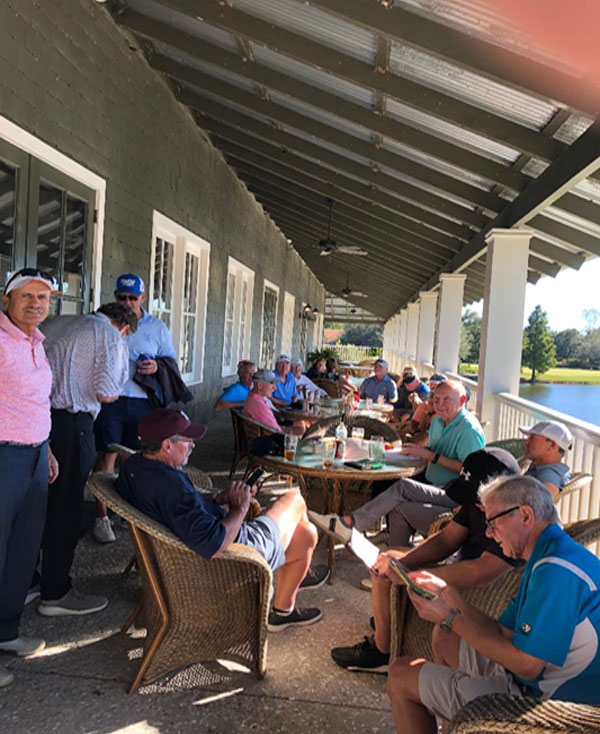 Thanks to Johnny D’Angelo for co-hosting the Myrtle Beach event. Just had to post this photo of Johnny’s golf bag from Rolling Hills that he still uses after retiring in 2010. Johnny has not changed a bit and will be easily recognizable even on a busy street in New York City. 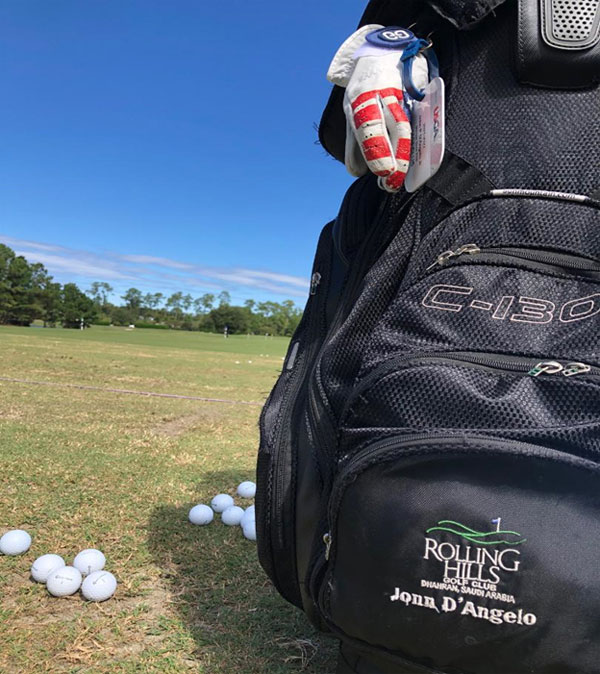 Next year’s 2023 events are being discussed with details to follow. I am always interested in hearing about great places to meet and play golf so let me know if you have any suggestions. If you are interested in being included in the database, please contact Mike Haas at mdhaas@attglobal.net, mdhaas51@yahoo.com or by cell at 361-2575933. If you are interested in getting in contact with any of the players, please send me your contact details and I will pass them along.

Hope to see you next year.