Aramco Retiree Golf Group Teed It Up in Grapevine, Texas

The group has been mostly vaccinated, but the group continues to adhere to guidelines about Covid-19. There were no reported Covid-19 cases.

The group was very lucky the entire week because stormy weather was predicted and did not start raining until we finished the final round on Thursday. I also learned to not wait until the last round to take the group photo because all those late nights take a toll on us retirees. 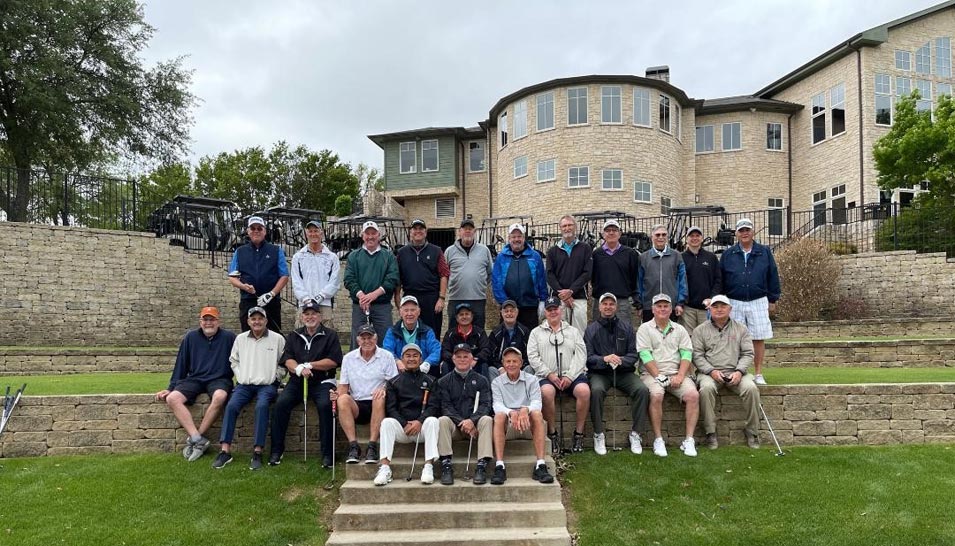 The Gaylord Resort hotel operated by Marriott was the event headquarters and offered a unique experience with the huge air-conditioned atrium with a large selection of restaurants, gift shops, vegetated garden areas, water features, colorful indoor lighting and outdoor attractions. The group highly endorses the Gaylord Resort as an excellent choice to stay if you are visiting the area. 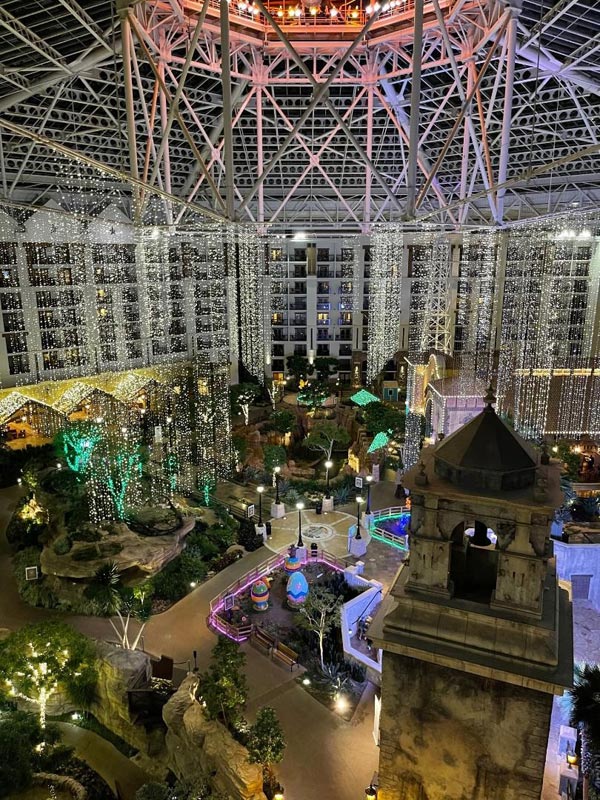 The Monday night Icebreaker was held at the Texans Station Sports Bar and was a great opportunity to reacquaint ourselves with old friends we had not seen in years. The hotel arranged for dinner in the outside patio area for our group with plenty of space to spread out yet close enough to visit with one another.

The photo below shows Tahir Bukhari, Mel Knotts and Shaan Bukhari. Shaan was visiting his family in Plano, Texas from New York and was able to join the group for Tuesday’s round. 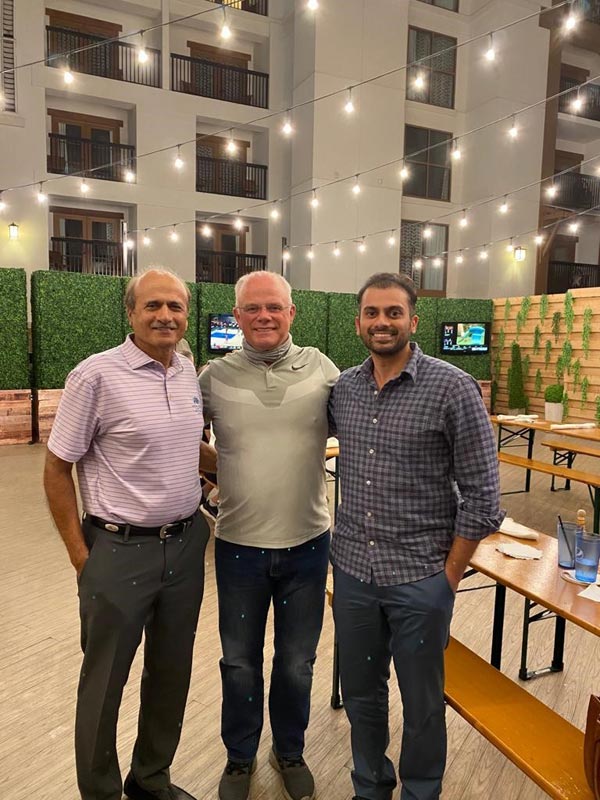 Tuesday’s Stableford round was held at the Grapevine Golf Clubs Mockingbird and Pecan nines and Wednesday’s Texas Scramble was held at Grapevine Golf Clubs Mockingbird and Bluebonnet nines. The course is public but nicely co-designed by the legendary Byron Nelson with fairways snaking around and through live oak trees and numerous water features with plenty of elevation changes along the way. 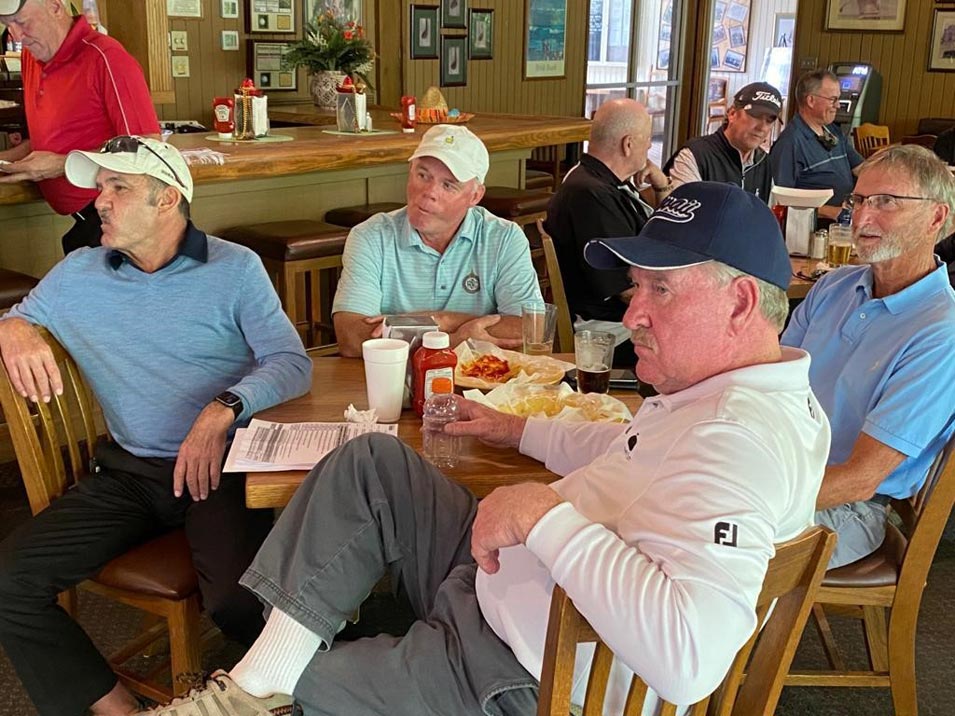 Robin Macdonald (below, Left) is pointing to two of the three big winners during the event, Ken Pitts and Jon Cavanaugh. Jon was crowned the overall 3-day winner followed by Mel Knotts second, not shown, but well known and Ken Pitts third. 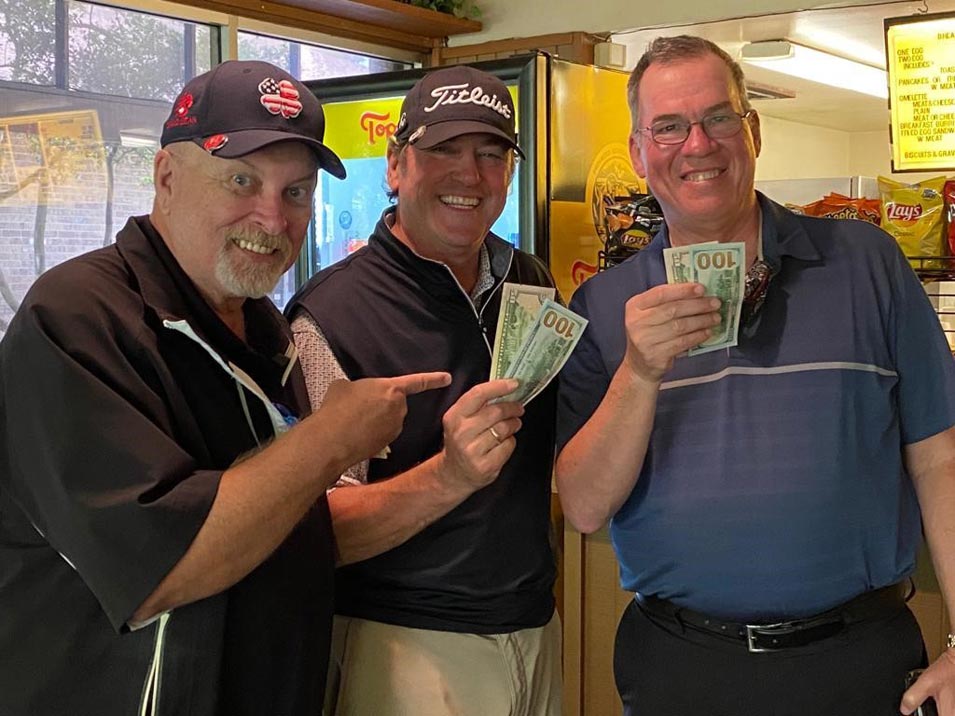 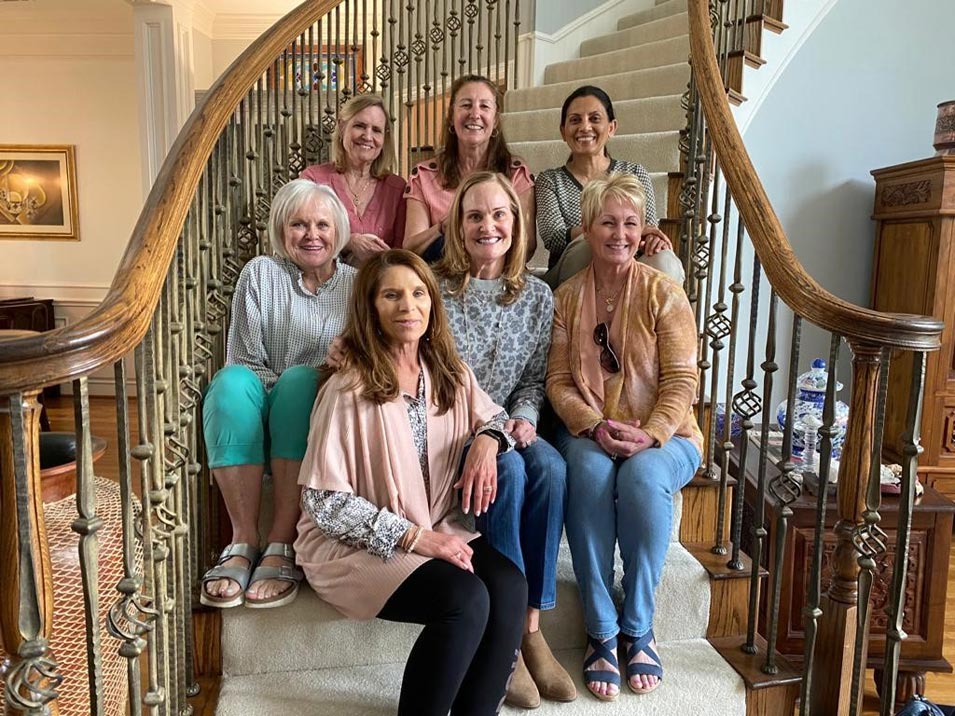 The ladies always seem to enjoy these trips even though their husbands are golfing. Ladies and guests are always welcome to play golf and full handicap is utilized to allow everyone to fairly compete.

Tim McGhee, local Grapevine resident, did an excellent job of organizing all the venues for the event. The dinners were special because of the spacious and private venue arranged for the group. The Tuesday night dinner at Farina’s Italian restaurant in Grapevine was held outside in their covered patio area and the food was delicious. 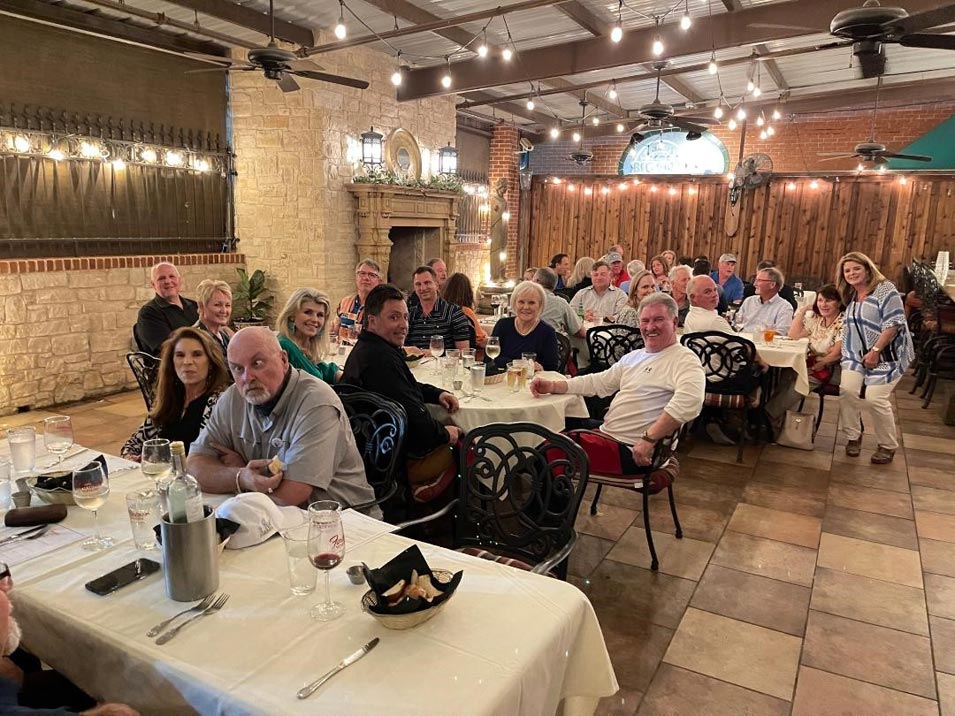 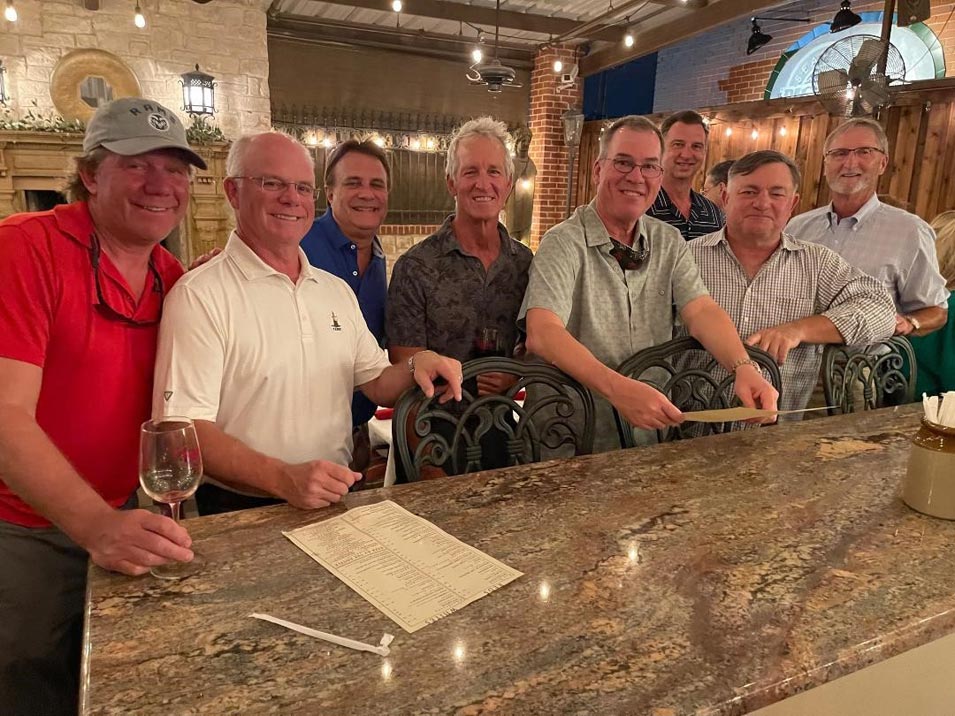 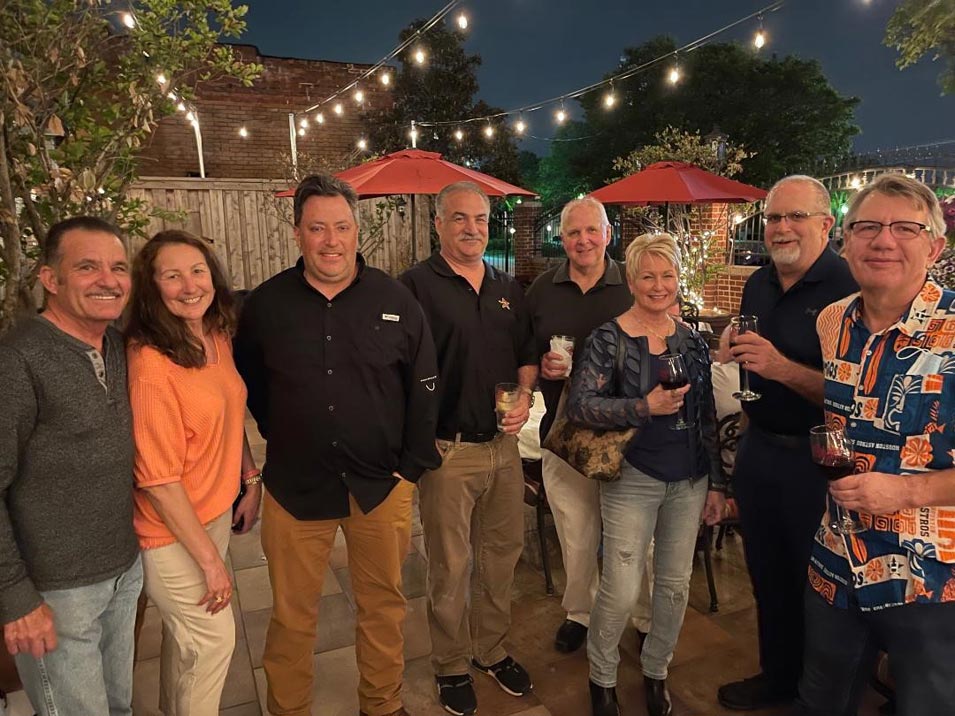 The Wednesday dinner event held at Esparza’s Mexican food restaurant in Grapevine touted some of the best Mexican food in Texas. We enjoyed the enchiladas, tacos, fajitas, Spanish rice and beans, chili con queso and other specialty items. 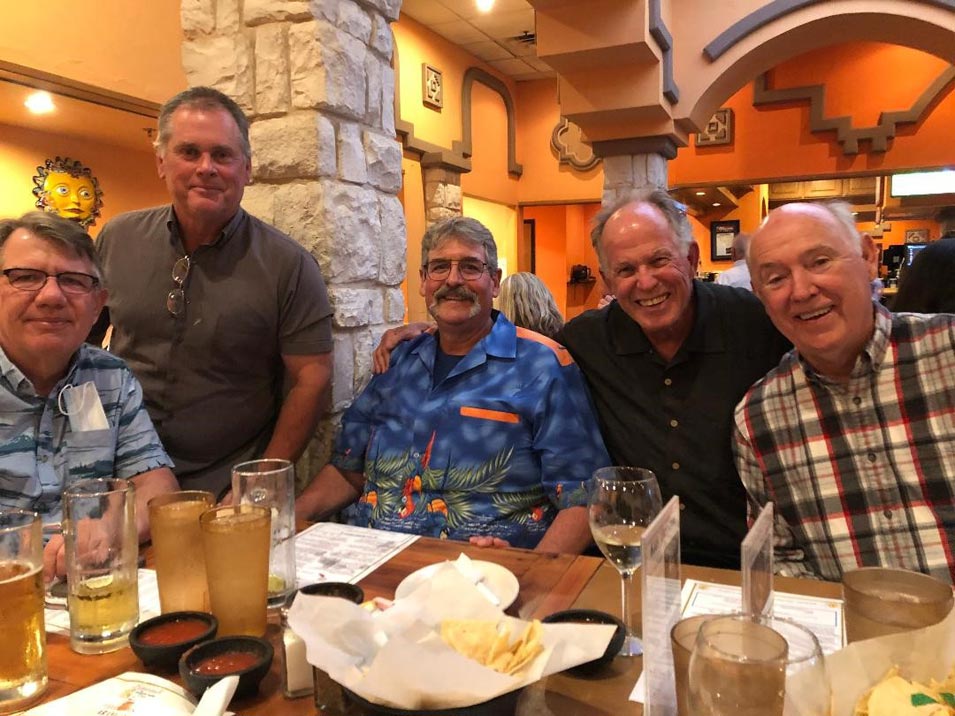 The Thursday round at Sky Creek Ranch concluded with a Texas BBQ in their clubhouse ballroom where everyone had an opportunity to say goodbye until we meet again. 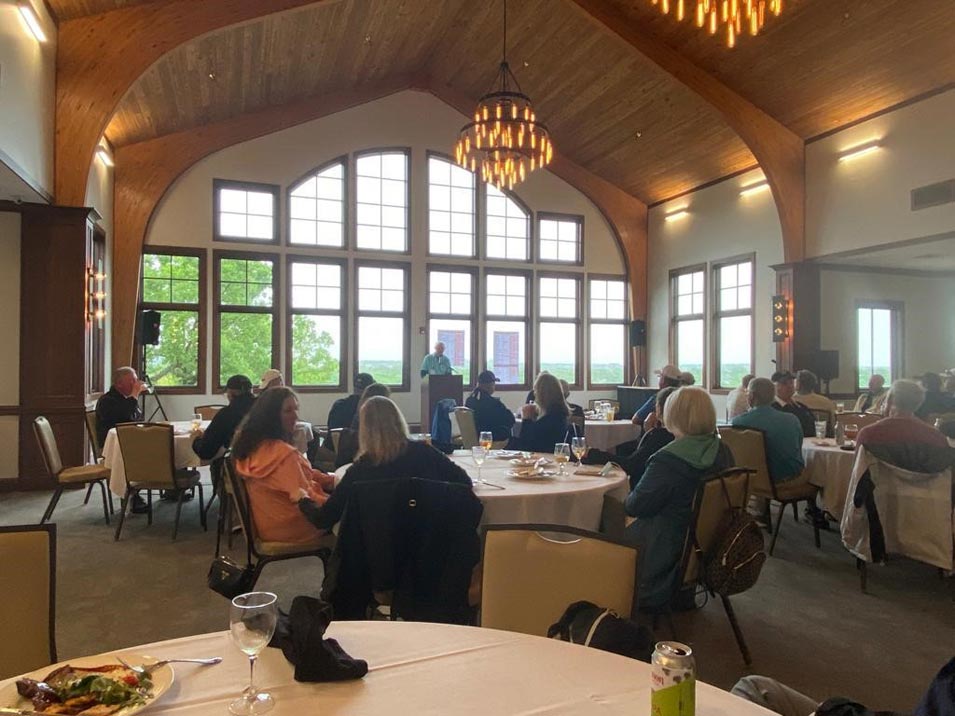 Mike Auflick held a special tribute to one of our long-time friends, David aka “Large” Cantrell who passed away earlier this year while on repat in Houston, Texas playing golf with Mike Auflick. Dave worked at Al Ghosaibi in Dhahran and was a long-term resident in Saudi Arabia. He was very active in the community including the American Business Association and other volunteer organizations. He organized golf tournaments annually both in Bahrain and in Saudi Arabia.

As guests departed, the final event in the rain, Mike Auflick held toasts outside for Dave, and everyone chipped in about their fond memories of Dave. Rest In Peace Dave, we miss you. 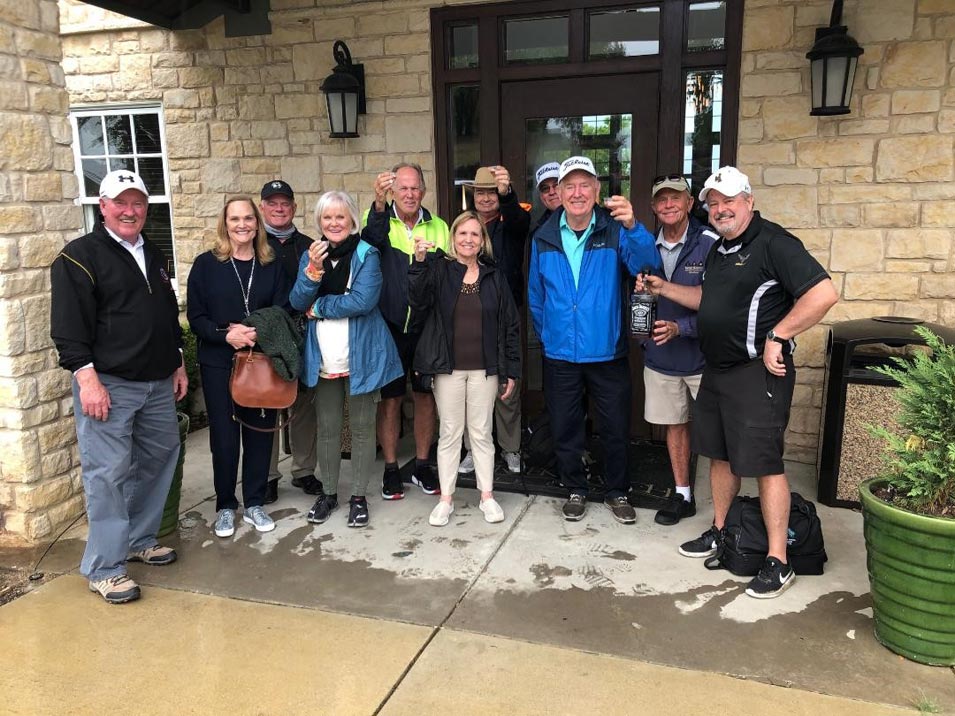 These Aramco Retiree Golf events are a great opportunity to spend time with our retiree friends and guests who traveled long distances to play golf and visit.  The next event is scheduled for September 14-18, 2021 at Callaway Golf Resort and Gardens in Pine Mountain, Georgia about an hour away from Atlanta. There are a few openings if you are interested in joining. The third event this year is going to be in San Antonio, Texas most likely November 15-19, 2021 so mark your calendar and more details to follow. If you are interested in being included in the retiree golf database, please contact Mike Haas at [email protected] or [email protected].