The Callaway Gardens & Resort were very accommodating to our group and we appreciated the assistance provided by their group sales department including Kit McClung and Marjorie Kendricks. The accommodations included single-rooms at the main Lodge building area and both two- and three-bedroom Villas off site that offered spacious living quarters. The golf pro Jeff Vedrenne successfully utilized his Doppler radar weather system to adjust our tee times to avoid bad weather. The group endorses the Callaway Gardens & Resort as an excellent place to stay if you are visiting the area.

There were 22 non-golfers and 33 golfers that included:

The overall 3-day winners were Rem Seil (pictured below) first place, Mike Robinett second place and Jim Wahl third place. I am happy to report that the winners were very generous in sharing their proceeds with the rest of the group at the evening gatherings.

The group was fairly lucky the entire week with weather because the area experienced stormy conditions from Hurricane Nicholas that hit the Louisiana coastline and skirted the area. We had a wet ending to the round on Wednesday, but the other two days were nice with cloudy skies to help keep the temperatures cooler. As Robin warned me, don’t plan any golf outings along the Gulf Coast and inland areas during hurricane season. I learned my lesson.

Lashar and Eman flew their own plane down from Tulsa, Oklahoma to Georgia dodging weather systems along the way and we watched his plane from the ground as he did a fly over of the resort dipping his wing to say hello to the onlookers.

Thanks to Ed Devlin and Jeff Meisner who assisted the group from Dhahran with setting up Golf Genius App so we could enter scores online, track the competition live and easily determine the winners and payouts. It sure made my job easier. 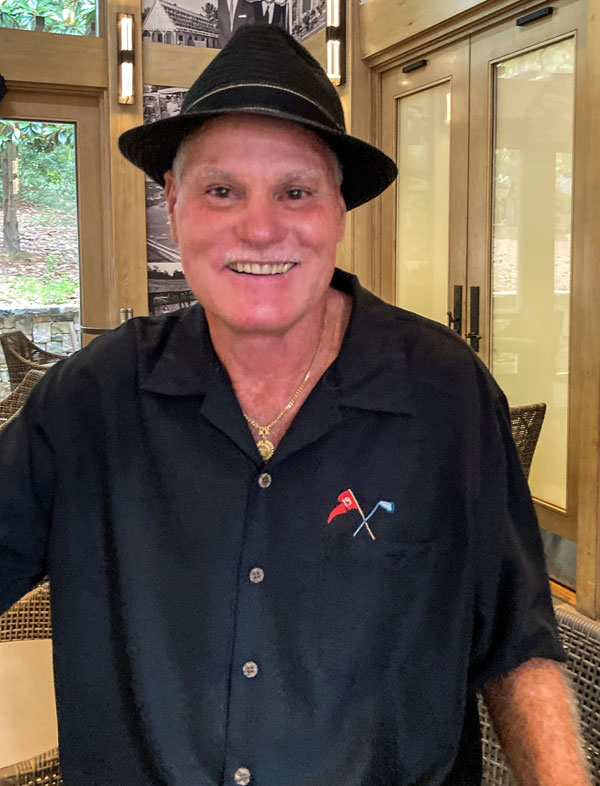 The Tuesday night Icebreaker was held at the Cason’s Tap Room that was a great opportunity to reacquaint ourselves with old friends we had not seen in years. There were 17 first time golfers that joined the tour this trip. We had two current employees, Ed Devlin and Adam Fox, attend from Saudi Arabia. As a matter of fact, Ed who works in HR back in Dhahran noted that he handled 24 of the players final exits when the retirees departed Saudi Aramco. I am sure Ed has lots of stories to tell. 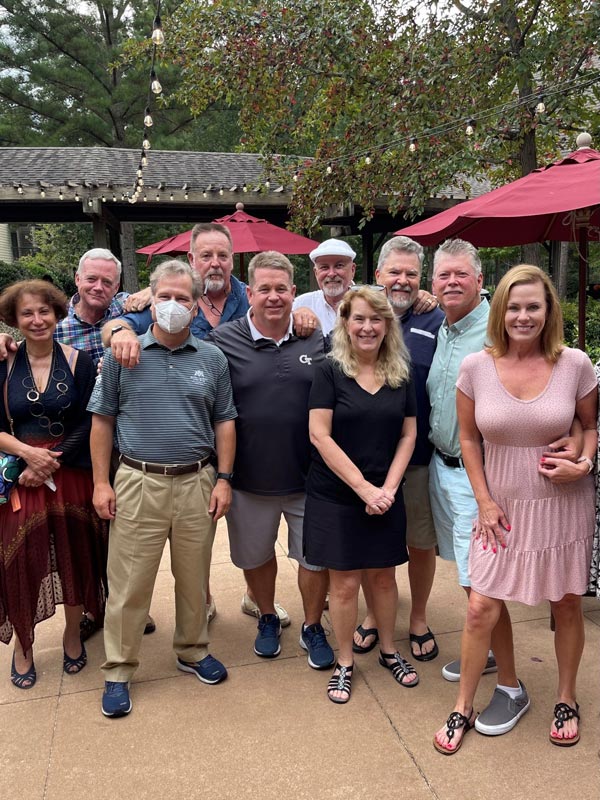 The inside dining at Cason’s for the Icebreaker was a comfortable setting to enjoy dinner and visit with friends.

The Wednesday golf round was a Stableford competition along with nearest the pin on all par 3’s held on the Lake View course played from the White tee boxes. As evidenced in the photo below, the course offered a challenge with all the water hazards scattered throughout the course. Individual Day 1 top winners included Rem Seil first and Jim Wahl second. The first-place team for Day 1 included Adam Fox, Paul Haas, Mike Haas and Don Padgett. 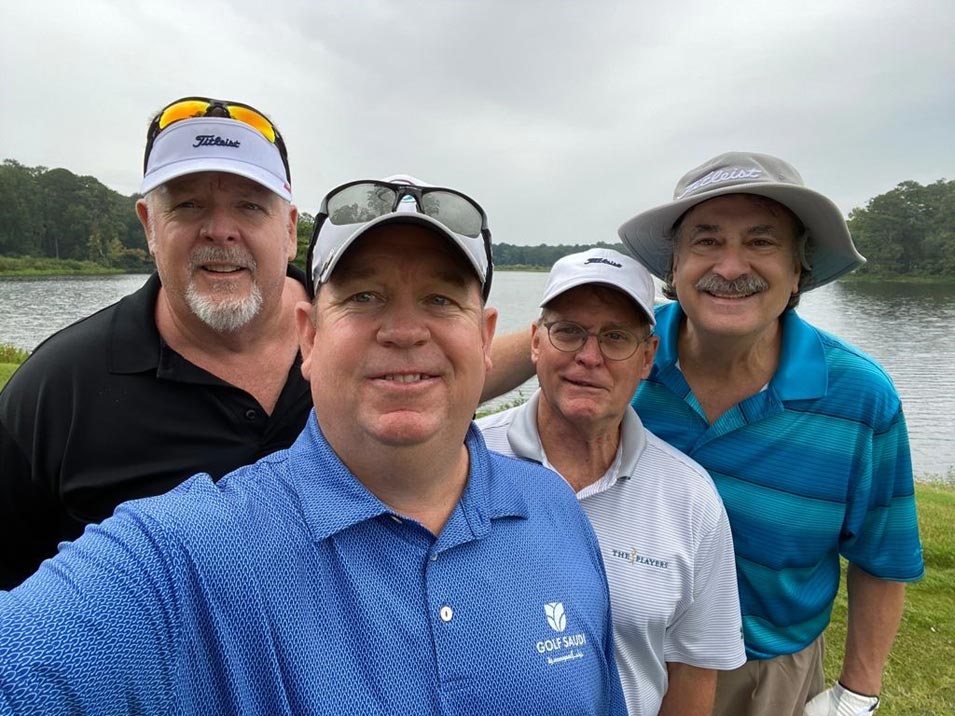 The Wednesday night dinner was held at the Piedmont restaurant onsite that included a wide range of delicious entrées that were enjoyed by the entire group in a modern glassed in dining venue with views of the outside garden areas.

The Thursday golf round was a Stableford competition held on the Mountain View course with nearest the pin on all par 3’s played from the Green tee boxes that offered its own challenge with up and down holes weaving through the mountains. Individual Day 2 top winners included Mike Robinett, Mel Rivera and Rem Seil all tied for first place. The first-place team for Day 2 included Ed Devlin, Mel Knotts, Mike Robinett and Jaime Hughes. Hats off to Jaime who came in as the highest handicap player, but became an integral part of the team after getting coached up by his "A" player and teammates.

These trips are special events to meet and reminisce about the old days in Saudi Arabia and the new days in our retirement location. Andy Thompson from Suffolk, Virginia and Will Kochinski from Los Angeles, California, one coast to the other coast, reunite after not seeing each other for a number years. It is very heartwarming to get together with our friends from around the world. Of course, Kenny Pitts somehow “photo bombed” the photo. 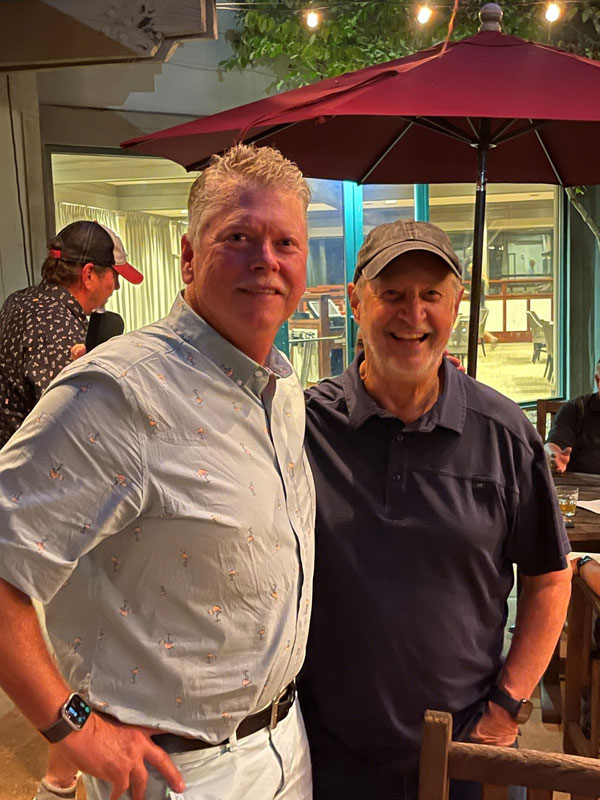 The Friday golf round was a welcomed Scramble competition held on the Mountain View course played from the White tee box front teeing area except from the White tees for the par 5’s to make it more challenging along with nearest the pin on all the par 3’s. I think everyone was happy to join up as a team to play the best shot ball, especially considering those late nights visiting during the week with our friends.

To nobody’s surprise, Ken Pitts' team emerged as the Scramble winner, shown in the photo with teammates Rodney Johnson, Mike Fischer and Dan Thost who shot 5 under with two teams tied at second place one shot back at 4 under. If those two teams would have sunk just one more putt... 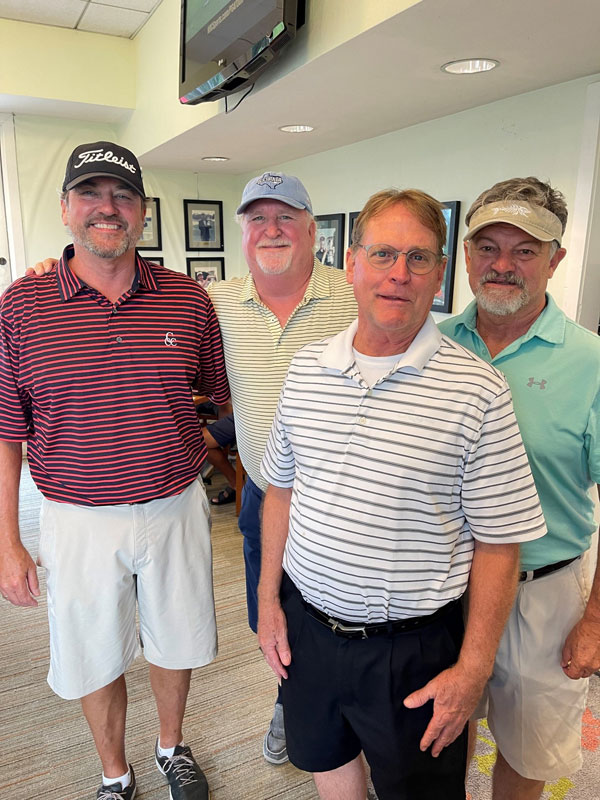 Last in the scramble at 2 over, but not least in our hearts was the team below that included Jon Grosch, Mel Knotts, Thomas Hogan and Ike Bellaci. Ike and Val were traveling back to Louisiana and heard that their families were still without power from Hurricane Nicholas so decided to stop off at Callaway Gardens & Resort for the last day to visit with friends and play the last golf round. Ike played with borrowed clubs so this team had a slight handicap. 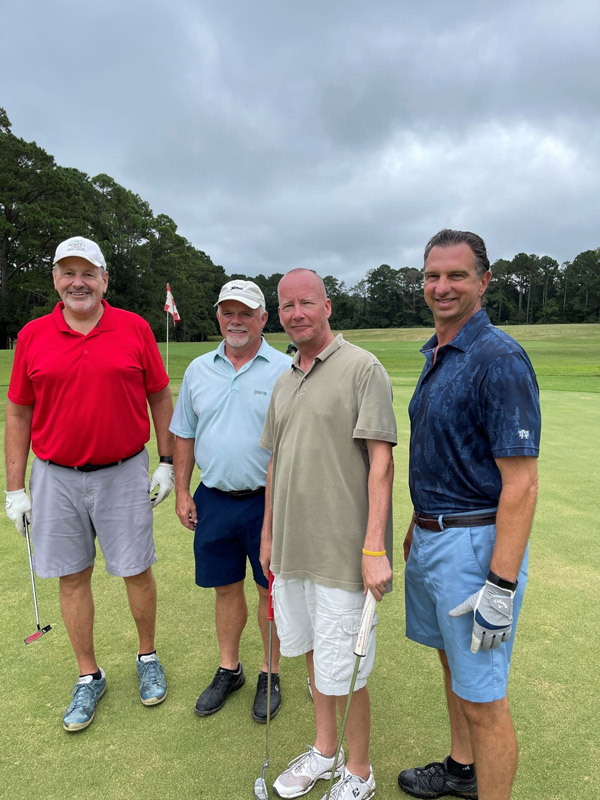 The Friday night buffet dinner at the Piedmont restaurant onsite was the final golf event. The food was delicious and included prime rib, boiled shrimp, shrimp and grits along with all the trimmings and a wide variety of home cooked deserts. The room was buzzing as everyone said their last goodbyes and exchanged cell numbers and email addresses.

The photo below includes: 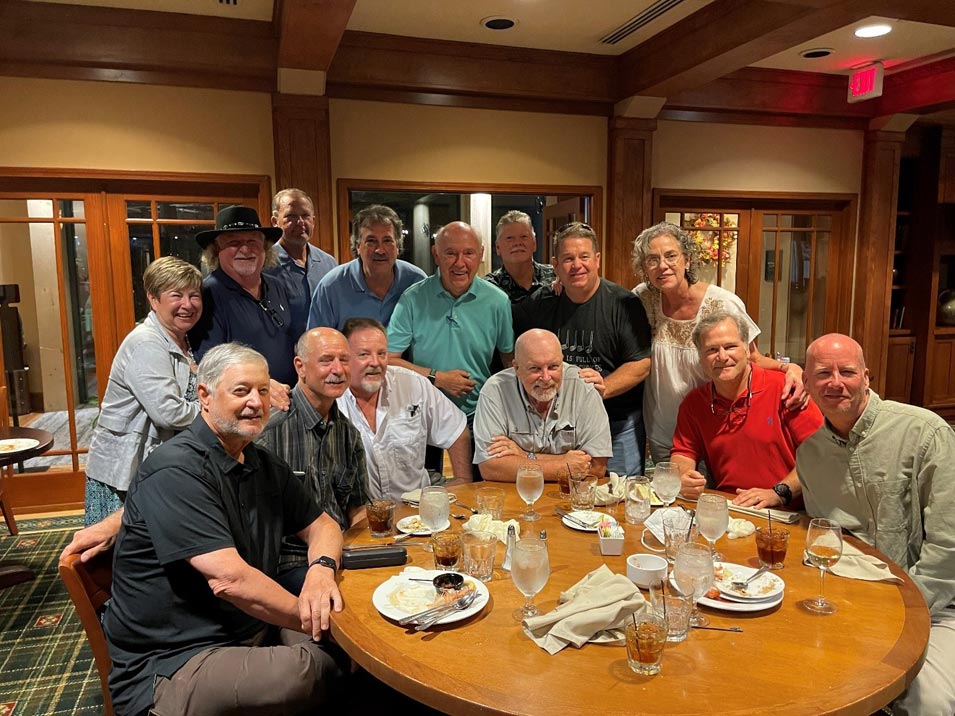 These Aramco Retiree Golf events are a great opportunity to spend time with our retiree friends and guests who traveled long distances to play golf and visit. The next event is being discussed with details to follow. I am always interested in hearing about great places to meet and play golf so let me know if you have any suggestions. If you are interested in being included in the database, please contact Mike Haas at [email protected] , [email protected] or cell 361-2575933. If you are interested in getting in contact with any of the players, please send me your contact details and I will pass it along to them.