Company is the only entity that received the award twice in 50 years. 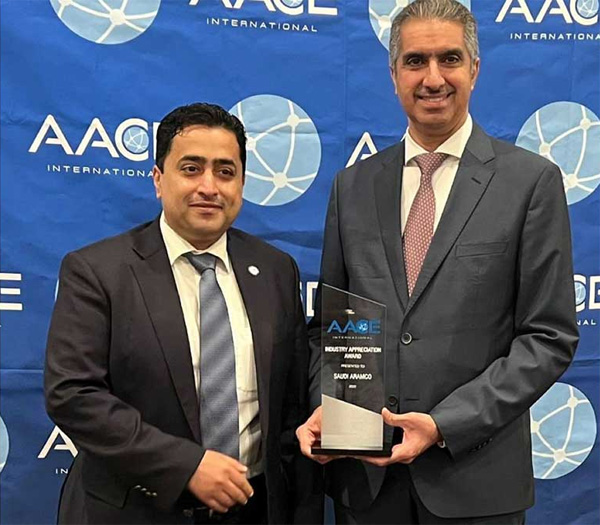 Aramco is honored once again to receive the Association for the Advancement of Cost Engineering (AACE) International Industry Appreciation Award for 2022.

What is AACE International?

Established in 1956, AACE International, together with the AACE International Certification Institute, serves over 10,000 members in 100 countries. Cost engineering is a field of study using integrated means and methods to enable sound decision making in enterprise asset management. AACE’s Body of Knowledge is developed, refined, and deployed by industry professionals worldwide.

Aramco’s resilience and agility has built one of the world’s largest integrated energy and chemicals companies. Saudi Aramco is part of the global effort toward building a low carbon economy.

Aramco was selected on the basis that it continues to be the largest Middle Eastern organization with the number of AACE International members, and that it has skillfully applied the total cost management methodologies in its governing procedures.

In addition, the AACE International — Arabian Gulf Section president Ghassan Al-Dossary is an Aramco employee, which further reinforces Aramco’s image as a total cost management front-runner, and accordingly, these were crucial deciding factors for AACE International to select Aramco over other companies and to win this award yet again.

A Rare Recognition For A Second Time

Aramco is the only entity that received the award twice in 50 years. Aramco’s last receipt of this award was in 2000. Recipients of the award over the years include AECOM, Independent Project Analysis (IPA), Jacobs, Chevron, the U.S. Department of Energy, CH2M Hill, Lockheed Martin, Primavera Systems, Bechtel Corporation, M.W. Kellogg, and Shell Oil Company, among others.

This Industrial Appreciation Award was presented to Aramco during the annual AACE International Conference on June 26 in San Antonio. The award was received by Murad A. AlSayed, Aramco’s general manager of Maritime, Building and Infrastructure Project Management, on behalf of Abdulkarim A. Al Ghamdi, vice president of Project Management.

Started in 1972, the Industry Appreciation Award is presented to a company or organization that has rendered exceptional support to the total cost management or cost engineering profession and to AACE International’s goals and objectives. The award recognizes organizations that embodied standards for excellence and innovation in the field of cost, risk, and project management.

The selection criteria evaluate the organization’s:

This is the only award AACE bestows on a company/organization.