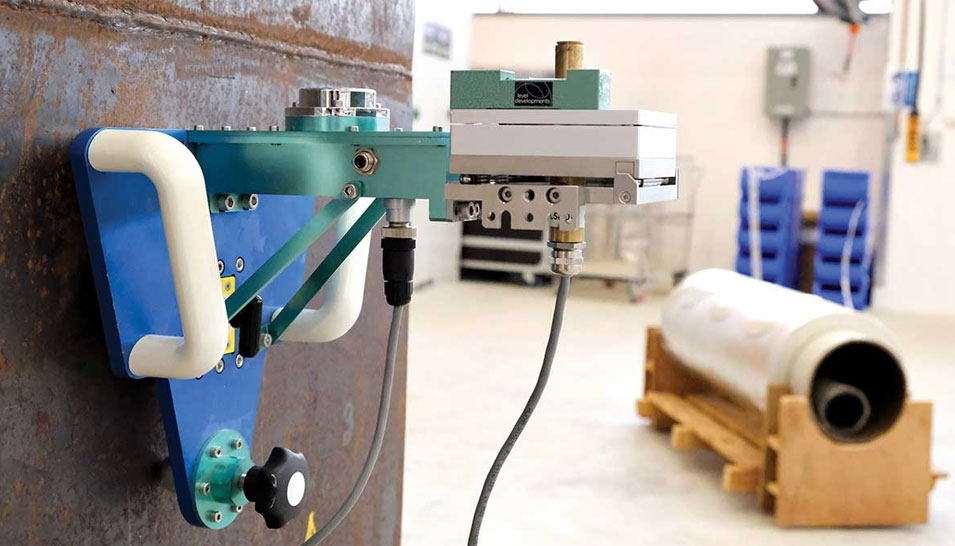 Aramco scientists and engineers have developed an innovative solution for a major industrial challenge facing the energy sector.

Editor’s note: This story is part of an ongoing series on Aramco technologies that are being commercialized by Aramco’s licensing arm, Saudi Aramco Technologies Company.

Metal storage tanks tend to expand over time, which means that year after year, their size increases beyond the initial capacity.

Now, thanks to a patented invention by a team from the Research and Development Center (R&DC) and the Process & Control Systems Department (P&CSD), there is a new method that ensures tank measurements are accurate.

The invention is called “Autonomous Robotic Tank Calibration (RTC),” which gives reliable measurements of tanks and captures the true value of the products.

Sahejad Patel, Intelligent Systems team leader with R&DC, said, “Thanks to our RTC innovation, we have enhanced the existing international standards with technology to improve calibration accuracy across the industry, capturing the full potential revenue of product sold.”

How the Current Process Works

Under the current process, the tank capacity is computed utilizing the traditional manual optical reference method.

The method involves two inspectors working together to measure the tank’s offset measurement along the full height of the tank and around its circumference.

To obtain the required measurement, one inspector is required to climb the height of the tank and manually pull a trolley with a measurement ruler via an extended over-the-edge cord.

As the trolley is pulled up, another inspector at the bottom of the tank can read the offset reading on the measurement ruler through an optical scope. This measurement is recorded at various points and around the full circumference of the tank.

The obtained measurements are then put into a mathematical model to generate the tank capacity. 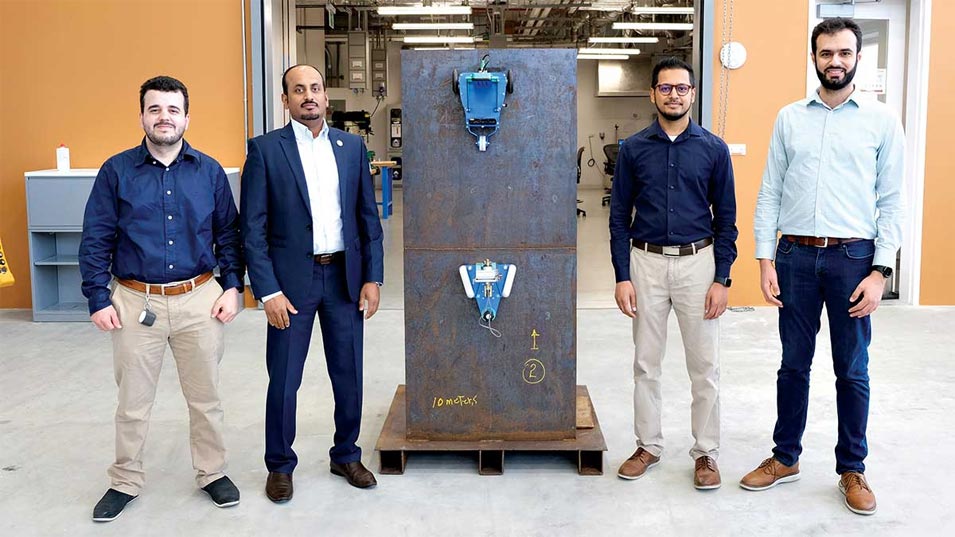 The RTC is made up of two parts. The first, called the base station, is placed on the lower level of the tank’s outer shell magnetically from the safety of ground level. The base station includes a laser that points upward to the second part, the crawler. The crawler is a robotic vehicle that travels up along the full height of the tank in a straight line.

Using a digital ruler to measure the offset in microns, instead of millimeters, it captures tank diameter changes along its height with very high accuracy. The information is communicated via Wi-Fi in real-time to a tablet computing the tank’s capacity.

A typical RTC can be completed in approximately four hours, compared with a full day for the traditional method. This means that Aramco can calibrate its tanks more frequently with increased accuracy.

The robotic solution also enhances safety as it eliminates the need for operators to perform manual calibration activities at elevated heights, such as the roof of the tank.

“The first prototype was designed and developed completely in-house within our labs in the Aramco Research Center (ARC) at King Abdullah University of Science and Technology (KAUST),” said Hassane A. Trigui, an engineer with the Intelligent Systems Team at R&DC.

Raja P. Pamarthi, an engineer from the Eastern Region Terminal Operations Department, added, “A wider deployment of this innovative solution within Aramco and accreditation by the International Organization of Standardization will serve as a precursor for worldwide adoption of our technology.”

Aramco, through its subsidiary Saudi Aramco Technologies Company (SATC), licensed the RTC technology to WISKOTS, an engineering consultant firm in Dammam to commercialize the automated robotic solution and provide tank calibration services to the industry.

“The increased accuracy, reduced time for calibration along with increased safety quotient make this technology truly a game changer. The licensee WISKOTS is well on its way to roll-out the product and we are excited about the potential that can be realized when this technology is widely commercialized,” said Abbas S. Al Ghamdi, CEO of SATC.

For more information about this technology, please reach out to Subashini Asokan, head of Licensing, SATC at subashini.asokan@aramco.com.