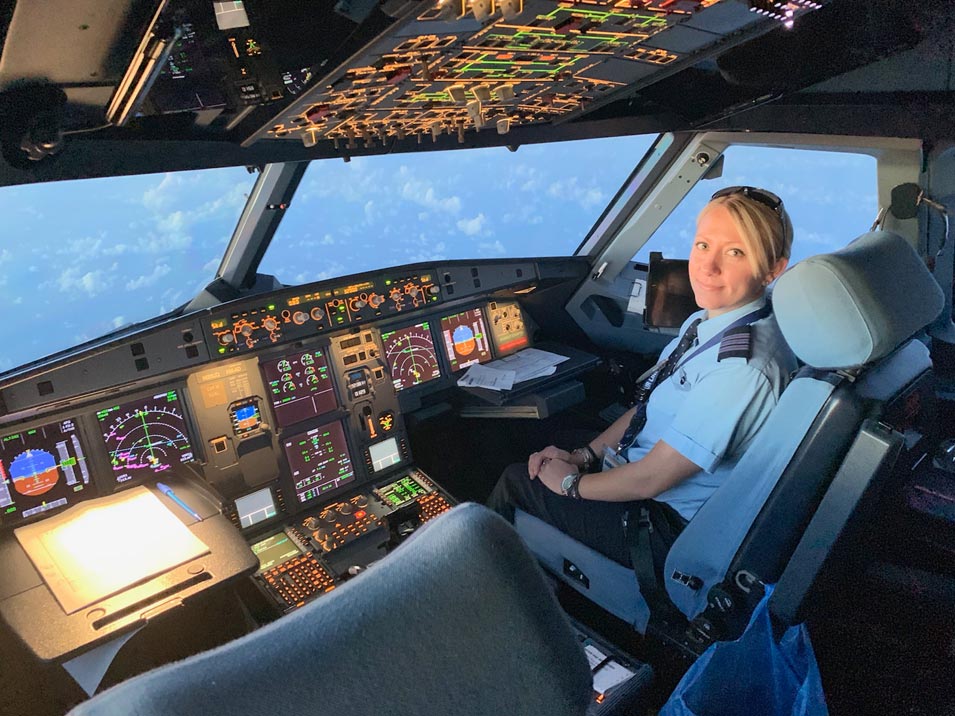 If you happen to be flying on a JetBlue Airbus and hear the name April Allen announced as one of the pilots over the intercom, that would be April Allen (Dharan School '97). April’s Mom and Dad (Claude and Verna Allen, Dhahran 1985-2000) both worked at the Dhahran Health Center where Verna worked as a Medical Technologist in the Laboratory and Claude was the Blood Bank and Transfusion Services Supervisor.

April attended Admiral Farragut Academy (Class of 2000). It was here where April earned her Private Pilots License. She soloed on her 17th birthday. April went on from there to Embry-Riddle Aeronautical University and then attended ATP (Airline Transport Academy) where she earned her Multi-Engine, Instrument and Commercial and CFI, CFII Pilot ratings. After that, she instructed for a number of years and got hired on with one local charter company. She flew many kinds of aircraft at this job including the Lear 35, 55, various Beech jets and the Beechcraft 1900, a 20 passenger airliner used by many of the feeder airlines of the day. April flew that airplane to the Bahamas and back almost on a daily basis. It was in the Beach 1900 she earned her ATP (Airline Transport Rating). Over the years, April has acquired type ratings on all those jets mentioned above plus the Airbus A-320.

After working for several smaller charter companies, April was hired by a large Fortune 500 company’s flight department to fly a Lear 45 and later, a Challenger 300.

After a number of years flying for the company, she applied for a 1st Officer position (Co-Pilot) to a number of major airlines. Jet Blue called her and she was soon hired on to fly the Airbus A-320.

April's transition from Aramco Brat to an Airline Pilot has been a long but fruitful one. She has definitely paid her dues to be sitting in the right seat of a JetBlue Airbus A-320.

Her mom and dad could not be prouder.