Employee League brings the thrill of the sport one-step closer 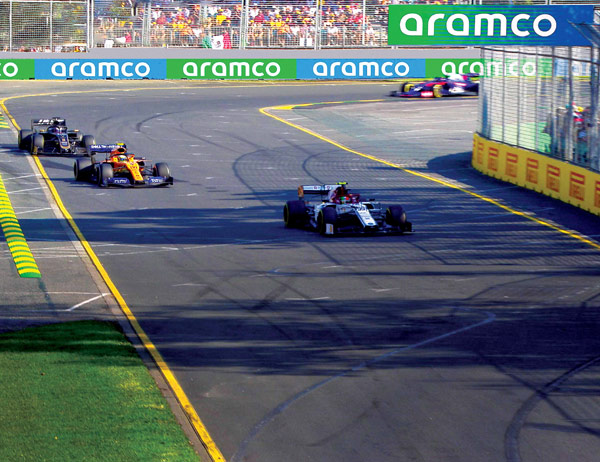 When Saudi Aramco became a Global Partner of Formula 1 auto racing, it made perfect sense. Formula 1 is a sport based on technology, teamwork, and a constant drive for innovation. Just as Aramco scientists are at the cutting-edge of Fourth Industrial Revolution (IR 4.0) technologies for finding, producing, and refining oil and gas, and breaking new ground in materials science in our network of research facilities, Formula 1 teams are constantly adapting what is known about engine design and laying the groundwork for technological breakthroughs of the future.

In short, we’re a perfect match.

Now that the company has launched its own F1 Aramco Employee League, each of us can now participate in the exciting world of F1 racing. The Employee League is a fantasy league where employees can select their own team and drivers, and compete against each other during the F1 season.

Those employees who come in first, second, and third place will win VIP Paddock Club access for a F1 race next season. Instructions for registering are down below, and the deadline for registration is July 2.

To get a taste for what makes Formula 1 such an exciting sport, consider what a Formula 1 driver experiences on race day. For 90 minutes, an F1 driver must race a circuit of 305 kilometers, attaining speeds of up to 360 kilometers per hour. But behind each driver, there is a team of at least 500 people, engineers, designers, fabricators, and mechanics, all at the top of their game.

To get a taste for what makes Formula 1 such an exciting sport, consider what a Formula 1 driver experiences on race day. For 90 minutes, an F1 driver must race a circuit of 305 kilometers, attaining speeds of up to 360 kilometers per hour. Because of the gravitational forces of taking a hard turn, a driver may experience the equivalent of five Gs of force.

Imagine having 60 or 70 pounds of force applied to your head, while steering around the corner at full speed. Now imagine doing that with 19 other drivers who all share the same goal: to be the first to cross the line to win the World Championship.

Here are the steps for registering:

Formula 1 cars are at the leading edge of technological innovation. Teams of engineers use sensors and gather real-time data to monitor every component, from the engine compartment to the brakes to the wear of the tires. Designers and fabricators are constantly on the lookout for minor tweaks that can save milliseconds and give their team an advantage. The end result can be literally breathtaking: An F1 car can accelerate up to 100 kilometers per hour and decelerate down to zero in four seconds. It takes longer to say that sentence than to actually carry out the act.

They also need a team. Behind each driver is a team of nearly 500 people or more, each member at the top of their craft as designers, data scientists, engineers, pit stop mechanics or fabricators, and logistics men who tear down the car after each race, box it up and ship it to the next destination for another race.

It’s hard to imagine a sport more aligned with Aramco’s core values and mode of doing business. Like Formula 1, we place our paramount focus on constantly improving safety and performance. Just as engineers track the performance of the vehicle during a race, down to a single component, our engineers are using IR 4.0 technology, artificial intelligence, and big data computing to ensure our facilities remain safe and operate at peak performance.

Like Formula 1 teams such as Mercedes Benz or Ferrari, Saudi Aramco has invested in research to rethink how the internal combustion engine works, aiming for greater fuel efficiency and lower emissions. A Formula 1 vehicle, for instance, emits less carbon than a standard passenger vehicle and has an energy recovery of over 50%.

The brakes of a Formula 1 vehicle are designed to withstand incredible heat and pressure, up to 1,000 degrees Celsius. An Aramco geologist will tell you that is the same temperature as molten lava. It is in this world of power and precision that Saudi Aramco and Formula 1 both have made their name, constantly searching for innovations that deliver greater power, efficiency, and sustainability.

Both Formula 1 and Saudi Aramco know that their future rests in the education of future generations, and together these two partners are investing in the areas of Science, Technology, Engineering, and Mathematics (STEM). Saudi Aramco is a Title Sponsor for the World Finals of “F1 in Schools” program, an international competition where students can design, manufacture, and race a miniature F1 “car of the future” while developing essential skills for their future.

Because of corporate brand sponsorship, fans will see Aramco’s name and logo on the trackside hoardings of the race track, on Formula 1 websites as well as on banners and scrolls for the network TV coverage during each race.

Corporate brand sponsorship will bring global visibility to Saudi Aramco in a number of ways. Fans will see Aramco’s name and logo on the trackside hoardings of the race track itself, on Formula 1 websites, as well as on banners and scrolls for the network TV coverage during each practice run, qualifying match, and final race.

The visibility comes at an important time for the company, as Saudi Aramco is now a publicly listed company, and now globally known as the most valuable company in the world. Sponsorship gives us the opportunity to tell the world who we are, what we believe in, and how we deliver the energy that keeps economies growing and societies prospering.

Needless to say, the fact that we produce the high-quality hydrocarbons that make innovation and auto racing possible is an added bonus.

The Saudi Aramco F1 Employee League will help employees, both longtime fans and absolute beginners, to stay up-to-date about the sport, and to experience the fun, speed, drama, and strategy of the game.

By registering in the league, employees will have an opportunity to compete against their colleagues, picking a dream team and keeping track of their scores through the season. Employees must register by July 2 to participate in the upcoming season, which begins on July 5 with the Austrian Grand Prix.

Aramco is the presenting sponsor of “Power Rankings,” the No. 1 most read serialized content about Formula 1 racing, which helps fantasy F1 players to review the data and take into consideration the various factors at play over a race weekend, such as the health of a driver or technical issues with a car, etc. Power Rankings is published every Wednesday after each race, and is available across social media, F1.com, and through a Power Rankings app.

Formula 1 and Saudi Aramco believe in fair play, of course, but it’s only fair to offer a few tips for new players on how to be successful. On the Formula 1 website, https://www.formula1.com, you can find the five secrets to success from last year’s winner, Lewis Johnson. Here are the recommendations from Johnson, an analytical chemist from Derbyshire in the U.K., for the 2020 season: