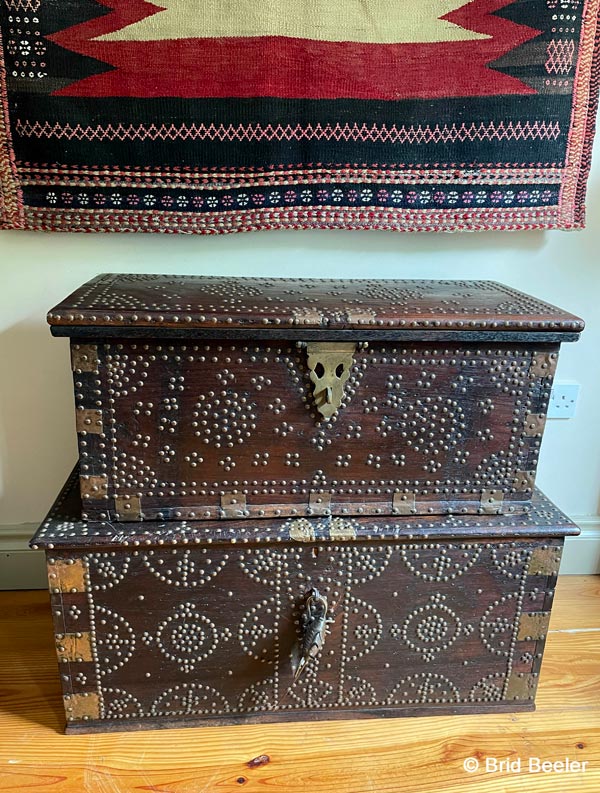 I remember my mother telling me that when she got married in 1960 her family paid a dowry of a thousand pounds to my father for her hand in marriage. That was a lot of money back then.

Dowries are found in many other societies and cultures in the world. It is common throughout the Middle East where the groom provides the dowry to the family of the bride which protects her future financial standing in the event the marriage dissolved, or the husband suddenly died, and she was left financially insecure.

Walking through the souqs, I often would see wooden chests covered in dust, stacked high in the back of stores, as if almost lost in time, forgotten from a bygone era. These plain wooden chests were elaborately decorated with brass sheeting and studs, knobs, hinges, elaborate hasps (clasps) sometimes accompanied with side handles. These were dowry chests, the domain of all women in the Arab world, who from teenage years planned for their future betrothal in society. Linen, embroidery, jewelry, and textiles would be part of their trousseau along with personal clothing.

While the origin of these chests is still somewhat unknown, it is most likely that they were made in India. Chests were part and parcel of the cargo that plied the Indian Ocean during the seafaring days of the Dhows that followed the monsoon winds. Trade between the Gulf, the Arabian Peninsula, Zanzibar, and East Africa was robust, and the chests would be offloaded in the various ports of Lamu, Mombassa and Stonestown.

There are different styles, and my collecting began with a Kuwait chest, although it was probably from Basra in Iraq. Inside was wine colored velvet lining with a lidded compartment. It had three drawers at the bottom and was the most elaborate of all the dowry chests I purchased over the years. I found it in Riyadh’s D’ira Souq near the Clocktower. An Afghan sold it to me. He was a bearded gentleman with gentle deep-set eyes wearing traditional Afghan sarwal khamis, who had a smattering of English. Like many Afghans, he was living out the Mujahideen era in Riyadh, trying to make a living and sending money home to his family. The antique store, like all stores, belonged to a Saudi who had a government job and who was most affable. Often, I would have to return on a Friday to bargain further with the Saudi owner, who would be holding fort when the Afghan had a day off duty. The deal was struck, a porter and wheelbarrow sought, and I became the proud owner of my very first dowry chest. It was the beginning of a modest collection and if truth be told, probably my least favorite of all my chests, it being too loud and too garish.

As the years passed, I was always on the lookout for another chest. I would search behind wooden doors, under piles of kilims, always seeking the next treasure. I began to take notice of the different elaborate designs - some more subtle, some more intricate, some well-made, some more crude, but none lined. Only that first Kuwaiti chest was lined and it was also the only one to come with a set of feet which it sat upon.

Later, on a camping trip to Oman, I had heard of an expat who had set up a business in his villa in Muscat and he was selling all manner of dowry chests to the expatriate community who were in the know. An appointment had to be scheduled to visit. He had hundreds of Omani chests in his villa. I took the bait and we drove back to Riyadh with our ‘new’ dowry chest strapped to the roof of our vehicle, along with the necessary export documentation from the Ministry.

Then in Yemen, once more I was taken by the chests available in the marketplace. The Yemeni traders knew exactly the value of their commodities and a $1,000 plus asking price was not uncommon in the early 1990’s. The Hadrami traders wouldn't budge, take it, or leave it. Not surprisingly, the Hadramis have become some of the biggest and wealthiest trading families in Saudi Arabia today.

Over the years I bought an assortment of dowry chests, each one more refined, with beautifully hammered workmanship on the hardwood. Today the traditional wooden dowry chests have been replaced by galvanized steel trunks, elaborately painted in colors of red, blue or green and in a variety of sizes. I find them useful for storing A4 size paper files in lieu of a grey metal filing cabinet. At least, their intricate painted colors and design bring an element of decorative appeal to any home office setting.