A Pilot Remembers King Saud and His Ministers 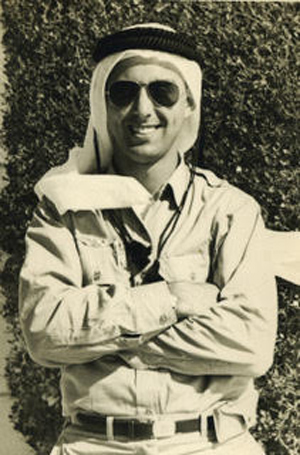 Chuck MacNab doing the “circuit” in the Rub' al
Khali in 1959. "It was a daily circuit from Dhahran
to the desert and back for personnel changes and
supply, and pure water to supply the various info
drilling that went on in the southern desert. We
also spent weeks at a time in the Rub' al Khali."

Anyone using a computer to read this story owes a debt of gratitude to the month of September in the year 1958. For it was in that month and year, in the Central Research Labs of Texas Instruments in Dallas, Texas, that the first working model of an integrated circuit was unveiled, the brainchild of a young engineer new to the company named Jack Kilby. By miniaturizing the parts of a transistor circuit and connecting them together in a single unit, the integrated circuit made possible the sophisticated circuitry that makes up the inner workings of your laptop, desktop, smart-phone, and nearly every other electronic device upon which you depend to make it through your day, whether you realize it or not. Without the invention of the integrated circuit, the modern world would be a much different place from what it is today.

Earlier that same year—on 31 January 1958—the United States joined the Soviet Union in the Space Age with the launching of its first satellite, Explorer I. This signal event followed nearly four months after the Soviet Union launched Sputnik I. For all of 1958 and for some years to follow, the US played catch-up with the USSR in what became known as the Space Race. Only when Neil Armstrong and Buzz Aldrin walked on the moon in July 1969 could America legitimately declare itself the victor.

Charles (Chuck) MacNab, who ruefully cannot recall his badge number at the time it was so long ago, remembers September 1958 well for a different reason. For it was in that month and year that he launched an eventful chapter in his own life, a stint as a pilot with Saudi Aramco.

“I was furloughed from TWA as a pilot earlier in 1958,” he recounted. “Needing work, I applied for the single position with Aramco at the Aramco building on 5th Avenue in New York City. I subsequently flew from New York to the Arabian Peninsula, where I was assigned as a pilot of single-engine de Havilland Beavers and twin-engined DC-3s. I flew many different assignments, including flying the TAPLINE to Beirut and transporting the King’s staff and others here and there across the Kingdom. Sometimes I was out flying for weeks at a time, living throughout the region known as the Rub’ al Khali. Occasionally I’d fly senior executives of Texaco and other oil companies to Bedouin camps or Aramco facilities. I flew into many areas around the Saudi Arabian Peninsula and into Riyadh.”

“I was hired by Mo Morris,” Chuck continued, “who was a top executive with the Aviation Division of Aramco at the time. He was interviewing pilots in NYC and there were something like 40 candidates applying. Mo hired me, the only pilot he hired out of those 40!” 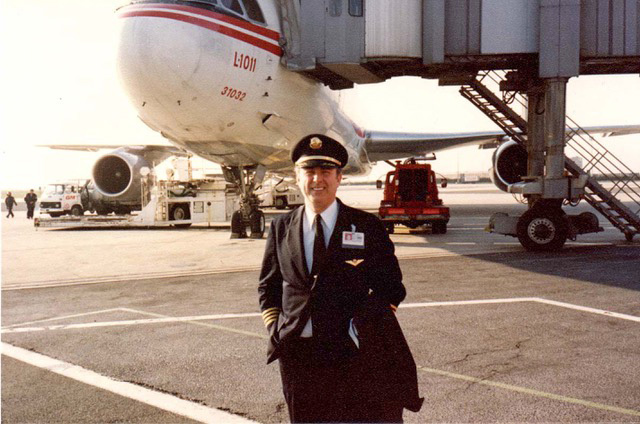 Chuck MacNab on the TWA ramp at Cairo, Egypt when he was flying on special assignment as a
Captain between Cairo and Bombay (now Mumbai). The aircraft is an L1011 aircraft (Lockheed)
and seats about 320 passengers.

Chuck shared one special memory from one of his flights into the Arabian desert:

“This one time,” he remembered, “I flew King Saud’s Finance Minister into the desert to meet the king during one of his many caravan visits to the desert. I landed alongside the King’s open touring car, and the Finance Minister and two of his assistants exited the aircraft. I’ve forgotten the Finance Minister’s name (most likely it was Prince Faisal bin Abdulaziz Al Saud), but he was a very gracious and friendly man as he traveled with me. I was flying a single-engine de Havilland Beaver that day—with room for one pilot and five passengers. We landed as we usually did when there was no runway or planned area. The practice was to hold up a piece of toilet paper so that I could see in which direction the wind was blowing. We always tried to land facing into the wind, of course. We spotted a flat place in the desert, pointed ourselves headfirst into the wind, and landed on a patch of sand right next to the King’s automobile. As the Finance Minister approached the limo sitting behind King Saud, he stopped and told everyone inside the car to exit, which they did promptly. They climbed into some of the many cars that were parked behind the now empty car. As the King and his Finance Minister drove off, with a wave to me, the Finance Minister pointed me to the empty car, whose motor was still running and whose doors were wide open. I had the air-conditioned car all to myself as I waited for the Finance Minister to return so I could fly him back to Dhahran. It was a very hot day and, thanks to the kindness of the Finance Minister, I didn’t have to sit in the aircraft in the heat. I found King Saud and his people to be personally very considerate of me whenever I interacted with them while in the employ of Aramco.”

Chuck spent one eventful year as an Aramco pilot based in Dhahran before being recalled by his previous employer:

“I was recalled as a pilot to TWA in New York in 1959,” he told AXP. “It was a difficult decision because I enjoyed the association I had with the people in the Aviation Department with me. I was very sorry to have to leave them. When the guys who managed the Aviation Department realized that I had to return to the US or otherwise lose my career with TWA , they did everything they possibly could to facilitate my return. Shortly before I left, I had a farewell dinner with Marty Platt and our fellow pilot friends at Aramco.”

Chuck lived a colorful life in his post-Aramco years:

“I subsequently continued my career for another 35 years with TWA, as a captain,” he told us, “flying all over the world on assignments to places like Cairo and Bombay.”

Today Chuck and his wife of 57 years, Georganne, live in Wentzville, Missouri, about 30 miles west of St. Louis. Before retiring, Georganne was Director of Flight Attendant Training for TWA and later became Director of Human Resources for McDonnell-Douglas Corporation, from which position she eventually retired.

"I spend much of my time actively working with local politicians as well as enjoying and managing my estate of 28 acres.”

Chuck invites former friends and colleagues to communicate with him personally at [email protected].