A Man of Many Names 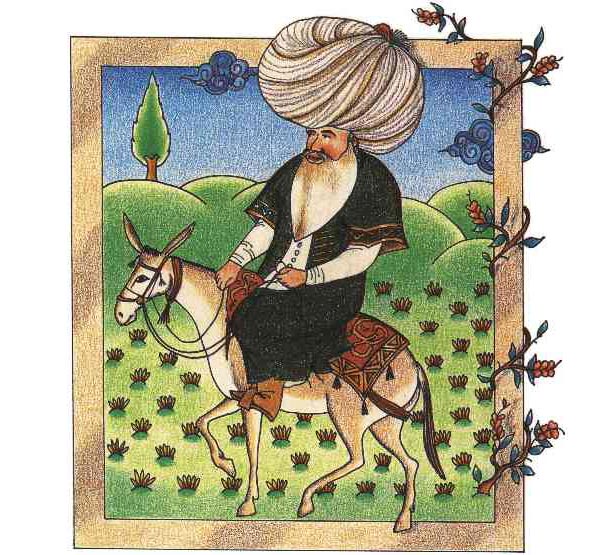 Story-telling comes in many forms, written and oral, prose and poetry, fact and fiction. There are fables like “The Tortoise and the Hare” and folktales like “The Pied Piper.” There are ghost stories like “Ali the Cairene and the Haunted House in Baghdad” and fairy tales like “Cinderella.” There are French chansons de geste like “The Song of Roland” and Spanish epics like “Cantar de mío Cid” (“Song of My Cid”). The list goes on and on.

A special sub-category of folktales features a character known as a trickster. Mythology.net defines a trickster as “a character who uses wits, rather than strength or authority, to accomplish his goals. … Tricksters come in all forms, shapes, and sizes. They can be men, gods, magical creatures, or animals, as the qualities that unite them come from their personality, not their physical appearance.”

Br’er Rabbit, the main character in many Uncle Remus stories, is an anthropomorphized trickster created by African-American slaves. Jack of “Jack and the Beanstalk” fame is likewise considered a trickster. So too is Shakespeare’s character Puck from “A Midsummer Night’s Dream.” Another famous trickster from folk literature is Masreddin Hodja.

Masreddin Hodja is a quasi-historical figure said to have lived in thirteenth century Turkey. Paul Lunde’s article “A Man of Many Names” from the April 1971 issue of Saudi Aramco World tells the fascinating story of how the legend of the trickster Masreddin Hodja spread across the Middle East, North Africa, and the Mediterranean into Spain, Italy, the Balkans, and beyond, taking on many names in the process.

One Friday sometime in the 13th century in the Anatolian town of Akshehir, the Shaikh Nasreddin Hodja mounted the minbar of the Grand Mosque and addressed the congregation. "O Believers," asked Nasreddin, "do you know what I am about to say?" "No, we don't," chorused the congregation. Nasreddin paused dramatically, then said: "If you don't know what I'm going to say, then what's the use of my talking?" And he descended from the minbar. The congregation looked at one another in confusion.

A week went by, and when Friday came, Nasreddin once more climbed the steps of the minbar and addressed the congregation. "O Believers, do you know what I am about to say?" This time the congregation was not going to be caught napping. "Yes," they all answered. "We know what you are about to say." Nasreddin again paused dramatically. Then he said, "Since you all know what I'm about to say, there's no need for me to say it." And he descended from the minbar. The congregation was bewildered. Finally, they decided that next Friday, one half of them would answer "no" to the shaikh's question, and the other half would answer "yes."

A week went by, and when Friday came, the faithful hurried to the mosque. Nasreddin mounted the minbar. "O Believers," he said, "do you know what I am about to say?" "No!" shouted half the congregation. "Yes!" shouted the other half. Nasreddin paused dramatically. Then he said, "Very good. Those of you who know tell those who don't." And he descended from the minbar.

Some modern Turkish scholars consider Nasreddin Hodja a historical personality. There is a tomb bearing his name in Akshehir. The inscription, if read backward (this may have been a posthumous joke), gives a date of A.D. 1284 for the death of Nasreddin. He is supposed to have been born in 1208, in the small town of Khorto near Siwrihisar. This would have been during the period when the Seljuk dynasty ruled this part of Asia Minor. Yet many stories are also told of Nasreddin's witty remarks to Timur Leng, the famous Tamerlane of Marlowe's play, who lived about 150 years later. For example, the day Nasreddin and Timur Leng went to the baths, Timur Leng turned to Nasreddin and said, "Tell me in all honesty. If I were a slave in the slave market, how much would you give for me?" Without' hesitation, Nasreddin answered, "Fifty dirhams." "Fifty dirhams!" yelled Timur Leng. "This belt around my waist alone is worth fifty dirhams!" "I know," said Nasreddin. "I added that in."

Needless to say, if anyone had had the temerity to say such a thing to the redoubtable Timur Leng, his head would not have long remained joined to his body. But it was nice to believe that there was a Nasreddin Hodja around to cut tyrants down to size, and as time went on the oppressed Anatolian peasantry delighted in adding to the exploits of the indomitable Nasreddin. In these stories, he usually appears as a sort of inspired simpleton. For example, one day some people asked him, "When the new moon appears, what happens to the old one?" Answered Nasreddin, "They cut it up and use it for stars."

Although stories about Nasreddin may have originated in Anatolia, they soon swept across the Muslim world. No matter where he went, Nasreddin was made an honorary citizen in his adopted country. The Persians call him "Mollah," a title equivalent to the Turkish "Hodja." The victorious Ottoman army carried stories about Nasreddin Hodja with them as they swept through the Balkans and Greece. When their European possessions were severed from the empire, the stories of Nasreddin Hodja remained. Today stories about Nasreddin are told in Albania, Armenia, Bulgaria, the Crimea, Georgia (in the Caucasus, not the American South), Greece, Rumania, Russia, Turkestan and the Ukraine.

But Nasreddin's greatest popularity was reserved for Arabic-speaking lands. In Egypt, he is called Goha, in the Sudan, Jawha, in Algeria, Jeha, and in Morocco, Jha. (The name gets shorter and shorter as one approaches the Atlantic.) For the sake of simplicity, we will call him Goha, like the Egyptians. One may well ask how Nasreddin was transformed into Goha. It seems likely that the name "Goha" was much earlier than the Turkish Nasreddin. In fact, Goha originally seems to have been an entirely different person, a member of a Bedouin tribe renowned for his simplicity. What seems to have happened is that Nasreddin and Goha coalesced into one person sometime in the 16th century. Today, the printed versions of his "pleasantries" sold in suqs from Cairo to Marrakesh give him the imposing title of Hodja Nasr al-Din Effendi Goha. In each country into which he has been adopted, the stories told about him naturally reflect the temperament of the people. When stories are told in the countryside, Goha is usually portrayed as a simple peasant. In the cities, his personality is more complex—sometimes he is a fool, sometimes he has the cunning of a Yankee city slicker. The following story from Morocco shows him in his role as peasant.

One day Goha entered a vegetable garden while its owner was absent and began to stuff a sack with fruits and vegetables. As he was about to leave, with the sack over his shoulder, the owner returned. "What are you doing here?" he asked suspiciously. Goha answered without hesitation. "That wind storm we had this morning blew me here." "I'll accept that," said the owner somewhat grudgingly. "But who picked those vegetables in your sack?" Again Goha answered immediately. "The wind was very strong and was about to blow me away again, so I grabbed onto the first thing I could, which happened to be these vegetables I am still holding." "I'll accept that, too," said the owner. "But how did the vegetables get into the sack?" "Funny you should mention that," answered Goha. "I've been wondering about it ever since I first saw you."

One of the most famous stories of Nasreddin-Goha is the story of the kettle. This story has even turned up in Afghanistan. One day Goha borrowed a kettle from one of his neighbors, and after a few days returned it with a small saucepan inside it. His neighbor was surprised at the presence of the saucepan, and asked Goha, "How did this get in here?" "The kettle had a baby," Goha answered. The neighbor was delighted, and laughing over Goha's stupidity, took both kettle and saucepan. After a few weeks had gone by, Goha returned and asked to borrow the kettle again. Naturally, the neighbor lent it to him with alacrity. Weeks went by, and Goha made no effort to return it. Finally, the owner went to Goha's house and asked for his kettle back. "May God have mercy on its soul," replied Goha. "Your kettle has died." "Died!" yelled his neighbor. "Since when do kettles die?" "Ever since they've been able to have children," answered Goha.

There are hundreds of Goha stories, and in traditional countries, like Morocco, almost everybody can tell dozens. But the fortunes of Nasreddin Hodja, who became Goha in the course of his travels, were not to be limited to oral tradition. In 1913 an Egyptian, Albert Ades, met Albert Josipovici, born in Constantinople, at a masked ball in Heliopolis (a town near Cairo) and found that they both knew a great many Goha stories. They collaborated and wrote a novel in French called The Book of Goha the Simple, which was published in 1919. It came close to winning the prestigious Prix Goncourt (the prize was awarded instead to Marcel Proust). It was translated into seven languages, turned into a play, and finally in 1958 was made into a movie which won a prize at the Cannes film festival.

But Goha stories may have had an earlier influence on European literature. It has been suggested that Cervantes got the idea, and perhaps even the name, for his great work Don Quixote (at that time pronounced "kihote") from Goha stories. After all, Cervantes spent some years as a prisoner in Algiers, and what better way to while away the time in a dreary cell than by exchanging Goha stories with one's jailer?

Paul Lunde has lived in Saudi Arabia, won degrees in English, Arabic, and Persian from the University of California and The London School of Oriental Studies. He is now studying Rumanian in Rome and compiling a bibliography of early Italian books on Turkey.

This article appeared on pages 8-9 of the May/June 1971 print edition of Saudi Aramco World.