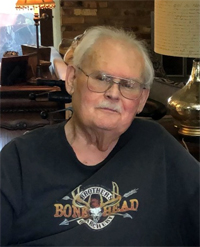 Robert attended high school in Rome, Italy while his parents lived in Saudi Arabia. Later he enlisted in the United States Army where he served as a paratrooper with the 101st Airborne, stationed in Fort Campbell, Kentucky. On April 16, 1960 he married Margo Matlock in Parkers Settlement, Indiana, and they celebrated 60 years of marriage. After leaving his service in the U.S. Army, he later graduated from Fort Hays State University.

Prior to moving to Tyler, Texas in 2018, Robert and Margo lived in Pocatello, Idaho for 31 years. In 1994 he retired from the U.S. Department of Agriculture as an Assistant State Conservationist, concluding a 30-year career in the Soil Conservation Service.

Robert was an avid gun enthusiast, fisherman, and ham-radio operator, and he especially enjoyed motorcycling and camping, and was a frequent visitor to Yellowstone National Park and its surrounding area.