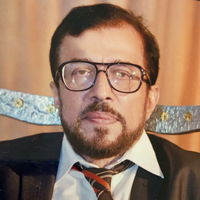 Saudi Aramco Ex-Employees Association (SAEEA) regrets to announce the sudden death of one of our retirees Muhammad Rafique Langah (Badge # 71782), in Lahore, on May 10th, 2020, he was born in Multan, Pakistan on June 14, 1948.

M. Rafique Langah joined Saudi Aramco in 1973 and spent the majority of his career in Northern Area Producing (NAP) based in Ras Tanura, which later expanded and renamed as Northern Area Oil Operations (NAOO). Mr. Lungah was the pioneer in establishing and expanding Northern Area Oil Operations from few departments based in RT and Tanajib areas to a full expansion into eight departments based in Ras Tanura, Juaymah, Tanajib/Safaniya and Shaybah areas working as P&P Analyst in the NAOO Admin Area Planning Staff.

M. Rafique left behind his grieving family including his wife, three sons, and three daughters.