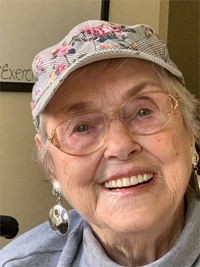 Bay St. Louis, Mississippi - Mary Loyola Rogan Reeder, 91, passed away peacefully at Dunbar Village nursing home on Monday, January 9, 2023. She had a number of her children and grandchildren present at her bedside.

Mary was born on January 26, 1932 in Fall River, Massachusetts. She was the youngest of three children of Edward and Madeleine Rogan. She is preceded in death by her husband, John Edward Reeder; her son, Michael Phelps Reeder (aka, Michael Prescott); and her sister, Catherine Rogan.

Mary loved life and her family. She enjoyed decorating her home and shopping and dining around town in Bay St. Louis, where she has called home for the past 23 years. She lived abroad and traveled extensively while her husband, John, was alive and working for Aramco. Earlier, she delighted in being a Navy officer's wife living and starting her large family in Key West, FL, New London, CT, Newport RI, and Eliot, ME. She finished raising her children in Virginia and Texas.