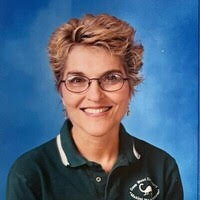 On Sunday, December 12, 2021, Mary Catherine (Stoffer) Reilly, 68, passed away at home in Georgetown, Texas surrounded by family. Her positive spirit never faltered despite the Lord calling her home, too soon for those of us left behind.

Mary (DH’68) was born in eastern Ohio into a family of 6. Two older brothers, a younger sister, and 2 loving parents. When Mary was 3 years old her father moved the family to Dhahran, Saudi Arabia for an employment opportunity with ARAMCO - an oil company hiring Americans who were up for the challenge and adventure of making a new home on the other side of the world.

Her time was spent soaking up the simple things in life with the close community of friends that deeply shaped her growing mind. Her family took advantage of all the traveling opportunities one could imagine. The middle east was at peace, and an oasis for the exploring mind that quickly learned to appreciate the rich history and art at her fingertips. Some of her favorite trips were to Rome to visit her brothers while they completed their high school years, as well as Switzerland, Nepal, Africa, Spain, Portugal, and Holland. She frequently reflected with the most loving and nostalgic sentiment upon these wonderful experiences.

When she and her family returned to the United States to live, Mary’s love for art lead her to the Memphis Academy of Arts where she obtained her first college degree and then a 2nd degree in Education from Memphis University. Though she was pursuing her dream of studying art, Mary and her family longed to return to the unique, adventurous, and culture-rich life they had previously enjoyed in Saudi Arabia. As fate would have it, in 1973 Mary’s father returned to his employment with ARAMCO in Dhahran, which enabled her to unexpectedly reunite with an old junior high boyfriend, Ed Reilly (DH’69). In 1977 they married and moved to Fort Worth, Texas.

Shortly after they wed, Mary’s medical challenges became evident. Her unique and late diagnosis of Wilsons Disease became a significant part of her life story, and with appropriate treatment allowed her to continue to live a full life with 2 children alongside her husband Ed.

As Mary’s children grew older, she gradually began a new chapter in life as an art educator. Eventually becoming a full-time elementary school art teacher, Mary’s passion for art and her experiences traveling the world bloomed into an exceptional art program. Despite the limited resources and time offered by a public-school elective, Mary drew her students in with both her technical knowledge of art, and the fantastic way that art ties all of us together, across time and from countries around the world. During special events that she hosted, extended families of her students would travel in from out of town to walk the art-covered halls and classrooms of her students who were excited to learn about their own culture and the culture of others, their own history and the history of others, and would beam proudly in front of the art that represented the vast and diverse world they had studied… all in an art class, lovingly and passionately guided by Mary Reilly.

Beyond her skill and passion as an art educator, Mary’s heart was truly with her family. She was never happier than when she and Ed had children, grandchildren, parents, or siblings gathered around a meal or bottle of wine to share their laughter and lives with each other.

After 44 years of marriage, Mary leaves behind her husband Ed Reilly. Her surviving brothers are Tom Stoffer and his wife Linda of Lebanon, TN, and Mark Stoffer and his wife Fran of New Hartford, CT. In addition to her siblings, she is survived by her children Sean Reilly and his wife Micah in Liberty Hill, TX, and Anna Bergeron and her husband Sidney who also live nearby in Leander, TX. She will also be lovingly remembered by her 3 grandchildren, Ambree Reilly, Jack Reilly, and Liviya Bergeron. Mary will be loved and missed forever, and her family is blessed by the lifetime of love, compassion, and care she shared with them.

A Celebration of Mary’s life has been scheduled for January 17th, at 10:00AM, at St. Williams Catholic Church in Round Rock, TX. All are invited.

The family requests instead of flowers to make a donation to their favorite animal shelter/cause especially to Texas Humane Heroes in Leander, Texas in Mary’s name where Ed volunteers his time.