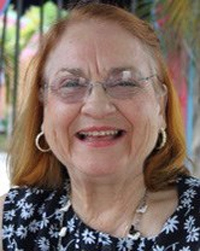 Mrs. Marjorie Jane (Wilson) DSouza passed away peacefully surrounded by her family at the age of 87 at her daughters home on June 2, 2021, after a battle with lymphoma. Marjorie was a loving, generous and determined person throughout her entire life. She was preceded in death by her beloved husband of 58 years, Dr. Ayres T. DSouza. Marj was born on January 4, 1934, in Pachmarhi, India to the late Herbert and Mona (Coady) Wilson. Marj's fathers family emigrated to India from Scotland and he worked as a policeman with the British Army. Her mother's family was from Ireland and also had emigrated to India. Marj had three brothers and she was often treated like the fourth boy in the family. She attended boarding schools in India because her father was transferred often to different cities. She excelled at both school and at sports. She met her future husband while completing her nursing training at J.J. Hospital in Mumbai. After completing their education, the pair moved to Saudi Arabia while working for the Aramco Oil Company. The couple were enthusiastic tennis players and won several tournaments as a mixed doubles team. In 1964, they emigrated to Massachusetts so that Ayres could complete his medical training at Children's Hospital, Boston. Marj worked tirelessly during this time as a nurse at the area hospitals. They moved to their home in Wenham in 1974 and resided there until their passing. After Ayres founded Pediatric Associates of Greater Salem in 1977, Marj was Ayres' first nurse and then became his billing secretary for many years. Marj and Ayres loved to travel, especially to Hawaii where they had a home, but also to Europe, Africa, the Galapagos Islands and India. Their safari in Tanzania to see Jane Goodalls gorillas was a bucket list vacation for Marj. She loved all animals and felt a particularly close affection to whales. When her family took a boat trip in 2011 to Stellwagen Bank near Provincetown to watch the whales, they luckily came upon several pods feeding at dusk, and she said, "now I can die happy". She was an avid painter. She worked on perfecting her sketches up until her death. Marj adored cooking and experimenting with recipes. We all recall the one Thanksgiving when she made a rather soupy key lime pie. She loved her flowers and was tending to her garden up until a week before her death. She will be sorely missed by all who loved her. She is survived by her daughter, Cheryl DSouza MD and her husband, Mark McKenna; three grandchildren, Ainsley, Andrew and Gavin; four sisters-in-law, Mary Wilson of Stone Mountain, Georgia, Margaret Wilson of Llantwit Major, Wales, Dorothea Wilson of Tifton, Georgia and Diana Demello of Mumbai, India and numerous nieces and nephews. She is preceded in death by her brothers Leslie Wilson, Henry Wilson and Aubrey Wilson; her brothers-in-law James DSouza and Conrad Demello and her sister-in-law Olga DSouza. Visiting hours will be at Campbell Funeral Home, 525 Cabot Street, Beverly, on Sunday, June 13th from 2 to 4 p.m. Her funeral mass will be celebrated at the Church of St. Paul, 50 Union Street, Hamilton, on Monday, June 14th at 9 a.m. Burial next to her loving husband will be at the Iron Rail Cemetery, Wenham following the funeral. Relatives and friends are invited to attend. In lieu of flowers, contributions in memory of Marj may be made to Dana Farber Cancer Institute or Greenpeace.