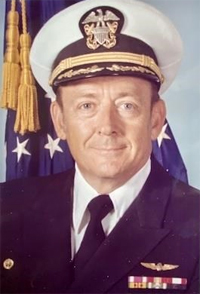 Milwaukee - Dr. Larry R. Fout, MD, Captain USN, Retired, died peacefully on June 23, 2020 in Milwaukee, WI at his home with his wife, Jane, and daughter, Jill, at his side.

Larry or "Doc" was born February 15, 1930 as Larry Roy Fout, the son of Earl and Marilyn Fout, in Piqua, Ohio. He spent his formative years in northwest Ohio and graduated from Holgate HS. He graduated from Ohio Northern University (where Jill was born) and The Ohio State University Medical School. He was immediately commissioned in the United States Navy. He was a great athlete, especially in tennis (won every match in college and most matches in the Navy), fast-pitch softball (was one of the best pitchers throughout his schooling and naval career), and golf (won many awards). Doc continued his education at the Naval Air Medical Institute (NAMI) in Pensacola, FL as a Flight Surgeon and received a degree in Public Health at Tulane University. The Navy took the Fouts to Pensacola, FL; Guam; Chi-Chi Jima; Beeville and Dallas, TX; Olathe, KS; New Orleans, LA; Alameda and San Diego, CA (where he was the senior medical officer onboard the USS Ranger CVA-61); Kaneohe, HI (as Fleet Marine Force Medical Officer); and Great Lakes, IL (as Director of Clinical Services). His last two duty stations were as the Commanding Officer of the hospitals at Naval Stations Guantanamo Bay, Cuba and Orlando, FL (where he retired in 1983). After retirement, Dr. Fout ran three hospitals and many clinics for Aramco Oil in Dharan, Saudi Arabia until late 1990. He moved back to northwest Ohio where he was a family practice physician and board member at the Defiance Clinic until late 2006. He retired to Hilton Head, SC where he saw patients for VIM (Volunteers in Medicine) until late summer 2016. Suffering a stroke in September 2016, Larry and Jane moved to be near family.

He is survived by his loving wife, Jane; his daughter, Jill (Dan McElroy); grand-daughters, Molly (Dan Kroemer) and Kelly (Peter Fleming); and great-grandchildren, Kellan, Mac, Finley, and Lucy. He was a devoted husband (who celebrated his 71st wedding anniversary in January), beloved father, revered grandfather, and generous great-grandfather. Larry, literally, had close friends all over the world. Dr. Fout was a role model to many and deeply loved.

A memorial gathering will be held Tuesday, July 7 from 10:30-11 AM at Schramka Funeral Home, 423 N. Main St., Thiensville with a Mass to follow at 11 AM. Captain Fout will be inurned, as a hero and decorated veteran of the Vietnam War, at Arlington National Cemetery.