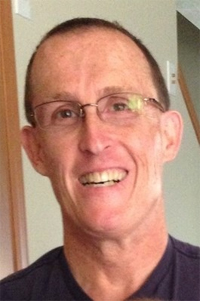 Ventura - Jonathan Jay Wallace left a hole in the hearts of those who loved him when he passed away on July 23, 2020 from intrahepatic cholangiocarcinoma. While cancer may have stolen his life, it will not remove him from our collective memories nor quash his indelible influence as a husband, father, brother, and friend.

Jon was born in Seattle, WA to Esther and Jack Wallace on April 12, 1955. His brother Jeff was born soon after. The family moved a bit further north and the boys grew up in the woods and streams of Lake Forest Park, WA.

Jon enlisted in the US Coast Guard in 1973 and received an honorable discharge in 1974.

Jon's early adult years were spent in the fishing industry, working out of Seattle, the San Juan Islands and Alaska. He lived in Petersburg, Alaska for two years, managing the gear store there for Alaska FISH. Jon's daughter Jessica, although only two years old at the time, visited him in Alaska and remembers helping her Dad fish for halibut and collect crab and shrimp in his free time. He returned to Seattle and remained in the industry until 1989, working for local area gear and net manufacturers Nor'eastern Trawl Systems, Seattle Marine and Gourock Industries.

In 1988, Jon met Jennifer Horn. The couple were inseparable from the start and married in 1989.

In 1993, Jon graduated from the University of Washington with a Bachelor of Science degree in Microbiology. While Jon was fascinated with microbiology, it was in high volume computing environments where Jon found his true calling. His second career began in 1995 first as a Systems Administrator and Network Engineer, and later as a Senior Unix System Administrator, Security Engineer, Systems Engineering Manager and finally a Senior Security Engineer. His expertise grew to include configuration management and software distribution, network design and engineering, internet security and firewall administration, intrusion detection, high volume website engineering and operations, and systems and security engineering. Over the course of this fifteen year career, among others, he worked for Sun Microsystems, ATT Wireless, Nordstrom, Saudi Aramco and Amazon.com.

In retirement, Jon was a volunteer Park Guide at Canyonlands National Park, Needles District in San Juan County, UT, and at Arches National Park in Moab, UT. He was a member of the Utah Library Services and Technology Act (LSTA) Advisory Council as a Rural Library Representative in Moab. He was also a member of Grand County Search and Rescue and Grand County EMS, both in Moab.

Jon was a unique individual. His interests were many, and he avidly dove into each new challenge he set for himself. He thrived in the outdoors. He was a nationally certified open water dive instructor and logged over 4,000 dives in his career. He found peace and renewal in the mountains as a hiker, backpacker, rock climber, cross country skier, river rafter and mountain bike rider. Locally, he was an exceptional road bike rider.

In lieu of flowers, please consider a donation to Food Share of Ventura County or a charity of your choice.

No memorial service is planned.

Arrangements are under the direction of the JOSEPH P. REARDON FUNERAL HOME & CREMATION SERVICE, Ventura.