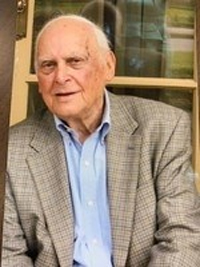 John Milton Cummings, Jr., age 94, of Houston passed away at home on Wednesday, October 21st, 2020. John was born in Lyman, Oklahoma, in Osage County on August 20th, 1926. He was the second child of four born to John Milton Cummings and Eleanor Keesee. He graduated from Crescent High School and enrolled at age 16 at Oklahoma A&M ( OSU ) in 1943. Shortly after, he transferred to the University of Oklahoma where he entered the V12 Navy College Training Program. John earned his bachelor's degree in Mechanical Engineering in 1946 at the age of 19 as one of the youngest engineering graduates in the history of OU. Upon graduation, he entered the U.S. Navy as a commissioned officer where he served in the Pacific on the USS Lowry during Operation Crossroads. After his service he returned to Oklahoma where he earned his Master's in Technical Journalism at OSU. Throughout his 42-year career in the Oil and Gas industry, John held many positions and worked in Europe, Asia, South America, and Central America. In the late 1950's, John moved to Saudi Arabia to work for Aramco. There, John met his wife Clare whom he married in Zurich, Switzerland in 1961. They settled in Houston where they raised their 5 children.

John was extremely proud to have been married to our mother for 58 years, until her death in 2019. He was a loving father, grandfather, and uncle. He was also a faithful member of his church for 60 years, fervent follower of OU football, and a proud Republican.

John is preceded in death by his wife, Clare Cummings, his sister Anita Merrell, and his brother Douglas Cummings.

A graveside service with Military Honors was held on Saturday, October 24th followed by a private memorial service at Memorial Drive United Methodist Church in Houston.

For those wishing to remember John, a donation in his name can be made to the American Heart Association.