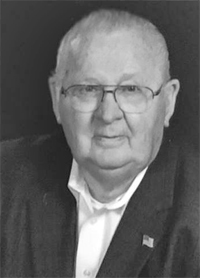 Howell William (Bill) Jones, 87, of Everett, WA passed away at home on February 9, 2020. Bill was born June 16, 1932 to Florence and Howell Jones in Snohomish, WA. Bill has lived in the Snohomish/Everett area his entire life. He was preceded in death by his parents; his wife, Patricia L. (Jarnigan) Jones and his daughter, Marci L. Barton. Bill was the beloved husband of Pat and cherished father of Tom (Becky) Jones, Jani (Bob) Abe, Marci (Ken) Barton and Brad (Bea) Jones. He will be greatly missed by his 15 grandchildren, 24 great- grandchildren and three great-great-grandchildren. After Pat passed in 2001, Karole Della Penna became a very close and personal friend and companion of Bill's and will also miss him immensely. Bill leaves behind his two sisters, Audrey Kellerman and Myrna Lucas, both of Snohomish. He also leaves behind numerous cousins, nieces and nephews living throughout the US. He could tell you almost exactly where any of them lived and did for a living.

Bill attended school at the Roosevelt Elementary and later graduated from Snohomish High School in 1950. There he was active in FFA, football and met his future wife. After graduation, Bill attended WSU for a year before joining the U.S. Marines during the Korean War. Bill was awarded the Purple Heart and unit citation awards during his tour in the Korean conflict. The things he learned in the Marines, served him well in civilian life and led him to the telecommunications field. Bill returned to civilian life and became a cable splicer and later a Construction Manager for West Coast Telephone (later GTE). His career path led him to higher levels of management and his leadership skills were in demand.

He and Pat had four children and made their home in the rural town of Machias. Bill kept and milked two cows every morning and night, by hand, for years when the four kids were all growing up. Bill was very active in Jaycees and March of Dimes campaigns. He and Pat worked together as a team and accomplished numerous things others had said were too hard to accomplish. He loved the work he did at GTE and greatly enjoyed the people he worked with there for 25 years. \

After his retirement from GTE, Bill's life became even more interesting! He was recruited by ARAMCO and he worked in Saudi Arabia for a couple years. He and Pat were able to tour Europe during his vacation periods. Bill then took on a contract to install the telecommunications system for the Alaskan Oil Pipeline project.

In his off-time, he became an excellent fisherman and photographer of the wildlife. Bill tired of traveling and bought a bait and tackle business and worked a lot closer to home. He always worked hard at whatever he was doing and always led by example. He firmly believed in leaving the world a better place than he found it. And he did.

Be at ease, Marine, your watch is done.