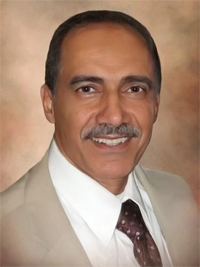 George Hirezi, son of Jabra and Margaret Hirezi, lost his battle with cancer on January 02, 2023 at the age of 67. He passed peacefully at his home, surrounded by his loved ones.

George was born on 11/02/1955 in Bethlehem, Palestine and was the youngest brother of six siblings. He had many fond memories growing up in a large, close-knit family with much teasing, laughter and love. In 1976, George moved to Lafayette, where he attended USL. There he received his bachelor's degree in mechanical engineering, and master's in computer science. After graduation, he worked for ICS and Bernard and Burk in Baton Rouge. During that time, he met his future wife Monica Hirezi (Amar). Soon after their marriage, George was offered a job in Saudi Arabia, where he and his wife lived and raised two wonderful sons. After 25 years with ARAMCO, he retired and returned to Baton Rouge.

George was a wonderful husband, a devoted father, a caring son, and a loving brother, who enjoyed spending time with his family. He loved his family dearly! He enjoyed playing and teaching soccer and racquetball. He was exceptionally intelligent and a problem solver, who often took on difficult and unwanted projects around the house. He had a very kind heart and a quick wit. He will be dearly missed by all who knew and loved him. George is preceded in death by his mother, Margaret Hirezi (Diek). He is survived by his wife of 32 years, Monica, his children Sameer and Michael Hirezi, his father Jabra Hirezi, his brothers Manuel and Nabil Hirezi, and his sisters Miranda Mugnier, Mary Harb, and Micheline Noa. George leaves to cherish his memory; a host of nieces, nephews, and cousins.

Funeral services will be held Tuesday, January 10, 2023 at St. George Catholic Church. Visitation is 8:30am-10:00am. Mass is at 10:00am. Acknowledgment, The family would like to thank The Hospice of Baton Rouge for their support, guidance and comfort during the last days of his life. Arrangements entrusted to Resthaven Funeral Home, 11817 Jefferson Hwy, Baton Rouge, LA 70816