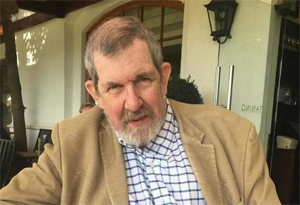 William Tatum Lauten III (Bill), affectionately known by his family as Billy, passed away at home on Tuesday, July 19th, 2022. He was born on April 6th, 1946, in Norfolk, VA, the son of William Tatum Lauten Jr. of Madison, NC, and Elizabeth Ellen Lauten (neé New) of Gastonia, NC. He grew up in Hampton, VA where he spent magical summers sailing on the Chesapeake and visiting his grandparents' farm in Madison. Bill graduated from Guilford college in Greensboro, NC, and subsequently earned his doctorate in Physics at Clemson University. He met and married his wife, Kathleen, while in graduate school. He began his professional career as a professor of physics at Sweetbriar College, and then transitioned into the oil industry. Bill and his family moved to Dhahran, Saudi Arabia, in 1982 to work for Saudi Aramco. They spent 18 wonderful years there, raising their children and making many lifelong friends. After departing Dhahran, Bill and Kathy spent the next 13 years in East Barnard, VT, where they once again made a roster of close friends. In 2013, they relocated to Houston, TX.

Bill was a lifelong learner who loved to teach and held a particular passion for science and music. He was able to travel the world while living in Saudi Arabia, and embraced the opportunity to experience new cultures, food, and all-around adventure. His love for travel only reinforced his great enthusiasm for good food, great wine, and mastering the art of cooking. He was confident that physics would "solve the problems of the universe" and he would wax poetic on the latest and greatest scientific discoveries to anyone who would listen. Bill's love of physics was balanced by his passion for music. He could sit for hours, listening to everything from classical music to Bob Dylan. He would play the the guitar to serenade his children to sleep and stay up until the wee hours playing song after song by ear. Bill was a great lover of all animals, especially his beloved English springer spaniels. He was a pied piper for all children, but most importantly, a doting father who took great pride in supporting his own children in all their endeavors. He was a coach and a boy scout leader. He spent hours helping with science fair projects, school assignments, and even supporting a PhD dissertation. Ultimately, his greatest joy in life was being a grandfather to his granddaughter Kipling. Bill had a wonderful sense of humor and a great joie de vivre. He will be dearly missed.