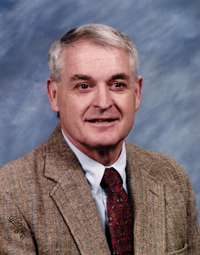 Bill grew up in Chappaqua, NY, and attended Horace Greeley High School and Suffield Academy. He graduated from Williams College, Williamstown, MA where he was a football and baseball standout. He then graduated from Jefferson Medical College, Philadelphia, PA. Bill spent 20 years practicing at Bryn Mawr Hospital, PA where he served as Chief of Otorhinolaryngology (ENT) for ten years. He also was a partner of a successful practice in Wayne, PA. Bill joined the Navy Reserves in 1979, retiring with the rank of Captain. He proudly served his country in Kuwait during Desert Storm.

In 1992, Bill and MA embarked on an adventure of a lifetime when he accepted a position as Chief of ENT for ARAMCO in Saudi Arabia. During the ten years they spent there, Bill and MA traveled extensively and made cherished friendships. Bill developed a passion for Persian rugs and became an astute buyer and barterer whenever they traveled through the Middle East. Every Holmes and Warrington household features many of the beautiful rugs they brought back with them.

In 2001, Bill and MA moved back stateside to Fairmont, MN where Bill practiced at the Mayo Clinic. Upon Bill’s retirement in 2011, they moved to their beloved long-time second home in Jackson Hole, Wyoming. They took full advantage of the lifestyle, enjoying long bike rides through the Teton Valley, golfing, volunteering for the Teton Science School, and enjoying time with friends at the Senior Center. Of course a doctor never truly retires, and soon Bill was running the Free Clinic in Jackson where he was much appreciated and admired by staff and patients.

Bill and MA came back to the East coast in 2017 to be closer to family. They settled in quickly at White Horse Village in Newtown Square, reconnecting with old acquaintances and making many new friends. They played weekly bridge, hit the gym daily, attended speaker series, and even gave a presentation on their travels in the Middle East. They enjoyed playing on their neighborhood bocce team, winning the championship in 2019 and landing Bill and MA on the cover of the White Horse newsletter. Bill served on White Horse’s resident medical counsel, and he was a compassionate listener to all who would tap his shoulder seeking a bit of medical advice from the “good doctor.”

While Bills accomplishments and accolades are many, nothing was more important to him than family. With six children who all played sports, there wasn’t a game he missed or a sideline he didn’t walk. Everyone knew when “the big guy” was in attendance, and his tailgates were epic. He loved to cook and could never fill your plate enough, making sure all were happy and full. As “Granddaddy” he continued being an avid fan and supporter at high school football, field hockey, basketball and lacrosse games. And thanks to technology he enjoyed watching his two grandsons play DI lacrosse this season on his computer. Bill took enormous pride in all his grandchildren’s pursuits and interests.

Bill’s love, compassion, generosity, intellect, and tearful laughs will be greatly missed by all his family and friends. But we take solace in knowing he will always be rooting us on from above. He will always be our greatest fan.

MA may be contacted at: maholmesksa@gmail.com