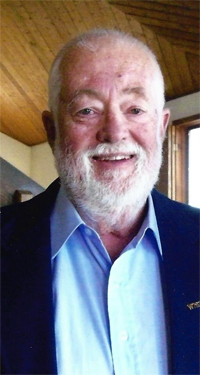 We are sad to announce the death of Walt Marshall. He lost his battle with melanoma at home on August 30, 2019. He was born October 31, 1940 in Floydada, Texas to Walter and Louester Marshall.

He grew up in Lubbock, Walt Marshall Texas. He developed a love for travel and adventure. In 1960 he joined the-US Navy and served in Vietnam. Walt married Dolores (Hecox) July 21, 1963.

He had a brilliant mind and earned degrees in both Math and Electrical Engineering from UW. He worked for National Marine Fisheries in Seattle and then for Aramco in Saudi Arabia. He traveled the world visiting many places: Kenya, Australia, Russia, Mexico, Ecuador, Europe, and Asia. His many interests included camping, hunting, fishing, cooking, motorcycles, dogs (Flyball) and woodworking, but his biggest passion was amateur radio. He received his amateur radio license in 1955 at the age of 15. His call signs were KSBFR and W7SE. He made friends all over the world, participated in contests and expeditions, and in 2019 won 8th in the world in 160-meter interna-tional low power contest. He was a master of Morse code and was able to transmit and decipher up to 40 words per minute. Morse code was truly his second language.

Walt could be the life of the party and was very witty. He never forgot a joke and loved to entertain friends with humor. He is survived by his wife, Dolores; 3 daughters, Lori, Louise, and Lily; 5 grandchildren; brother, Ken and sister, Lynn.

Donations may be made in his name to Hospice of Laramie or a charity of your choice.

Go to http://www.montgomerystryker.com/ to send condolences or to sign the online guestbook.