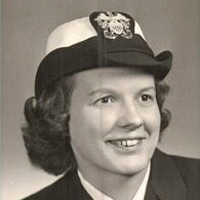 Virginia K. Hansen née Wilzbach of Calimesa, California left this world peacefully on August 18th, 2020 in the home that was built for her by her husband Walter R. Hansen (1908-1973). She began life in Cincinnati, Ohio and graduated from Mother of Mercy High School (1945). After that she led a life filled with adventure. She received a BSN from Case Western Reserve University School of Nursing in 1956. She served in the United States Navy, stationed at Mare Island in California as a nurse during the Korean conflict. She then went to work for the Arabian American Oil Company (ARAMCO) as a nurse at the Dhahran Health Center, Dhahran Saudi Arabia. It was there that she met the man she would marry, Walter. Before their marriage she traveled extensively across the Middle East, Europe and Asia; from the opium dens of Hong Kong, to Petra in Jordan, to the Great Pyramids, to Vigeland Park, Oslo, Norway. She married Walter R. Hansen in Switzerland, and eventually settled in Banning, California, while Walter built her dream house for her. She worked for the San Bernardino County Department of Public Health for 22 years until her retirement. She then worked for the Orange County School District at the Outdoor Education Camp in Forest Falls for a number of years. She was an amazing mother to two children that survive her, Walter A., and Rosemarie. Virginia is also survived by three grandchildren, Kristi, Jessica, and Elliott; along with four great grandchildren. She was preceded in death by her sisters, Rose, Dorothy, and Gertrude.

Virginia K Hansen née Wilzbach lived a wonderfully full and adventurous life for a woman of her era. There will be no services (at her directive). Please raise a toast to her with either your favorite ice cream, or some Graeter's Ice Cream, her Cincinnati favorite. If you feel so moved as to do something in her honor, please donate to a charity that touches your heart.