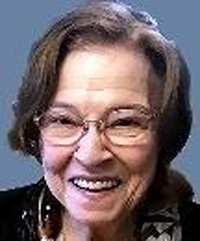 Teri married her beloved husband James (Jim) Rosati in 1957 in Syosset, N.Y. Teri graduated from the University of South Florida B.A. in Mass Communications, Oklahoma University M.A. in Managerial Economics. Jim and Teri enjoyed traveling around the world a few times as well as living and working overseas. Teri started her career working for the family business Rosati and Sons, then Co-founded Rosati-Benjamin a Public relations firm, her next challenge was co-founding the FACE Learning Center a career counseling center serving thousands of displaced homemakers and other women in need. Teri and her Jim then took off overseas to work for Aramco in Saudi Arabia where she was an integral team member in the Public Relations department.

After their travels, Teri retired back to her home of 61 years in Belleair Bluffs FL. Teri enjoyed her love of gardening, many friends have one of her Staghorn ferns. Her other interests were boating, long walks and her beloved cats. In addition to being a loving mother and devoted grandmother, Teri was well known for her gracious heart, compassion, generosity and friendship.

Teri was preceded in death by her husband Jim (9/2017). Teri is survived by her three sons and their families, James III, Albert his wife, Melissa, and Stephen (Carol d4/2020). Grandchildren, Robert, Christina, William, his wife, Katie and Alyssa. Brothers, Walter and Alfred (d2018). Burial will be held at later date at Bay Pines National Cemetery. In lieu of flowers please make contributions to The Alzheimer's Association or Friends of Strays.