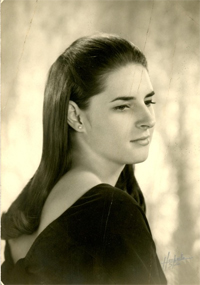 It is with both joy for having known her, and sorrow for having to let her go, that the husband of Sylvia Bigler shares the news of her passing at RainBo Ranch on Friday, April 26, 2019.

Many knew her as a friend, an exceptional mentor and a travel resource extraordinaire. To Dick Bigler she was his beloved wife of 45 years and creative partner in their marriage who was game to travel the world with him in his extensive international job opportunities.

Sylvia Sledge was born on September 12, 1946 to Captain Thomas E. Sledge Jr. and Doris McCauley Sledge in Texas City, Texas. She graduated from Washington-Lee High School in Arlington, VA in 1964 where she was a Yearbook Editor. She followed at Chamberlain School of Design in Boston graduating in 1968. There she was Junior Class President and Senior Student Body President. Afterwards, she took a Gap-Year to Europe. When she returned to the States, she became Jimmy Brennan’s (of Brennan’s Restaurant) personal assistant which led to a keen interest in the culinary arts.

Wanderlust prevailed in 1972. With $500 and a one-way plane ticket, Sylvia flew to Australia to spend a year living in Sydney. She then journeyed to the Outback and Alice Springs for another year abroad. She became a working courier for travelers to Ayers Rock, flew gliders and made many friends accompanied by interesting travel experiences.

In 1974 Sylvia caught a freighter from Perth to Singapore with an international group of travelers. A camaraderie developed where she traveled on to Malaysia, Penang, Bangkok and Chang Mai. She flew on for another adventure to Kathmandu. These many miles were experienced with a small suitcase that back-in-the-day had no wheels and on an extremely limited budget.

Later she joined a Sundowner’s Tour Group for $300 that employed a bus driver and courier. Voted Treasurer of the group Sylvia negotiated hotels and food for four months as the nomads traveled to Nepal, India, Pakistan, Afghanistan, Iran, Iraq, Turkey, Yugoslavia, Austria, Switzerland, Germany, France and Belgium. Eventually, they arrived safely in London. Their only dangerous experiences were a rock-throwing incident over an unacceptable 70’s mini skirt in Pakistan and a bus breakdown near Tehran requiring an overnight stay in a hayloft.

After 2 years and five months, Sylvia flew home with $1.78 in her pocket to help her Dad celebrate his birthday in Louisiana. The Colonel did not disapprove of nor suppress any of Sylvia’s travels but did urge continued caution with her adventuresome spirit. Over the course of her lifetime, her wide range of interests led Sylvia to many fascinating travel experiences. She enthusiastically visited 113 countries!

Sylvia Sledge married Richard E. Bigler on May 4, 1974. Defining career choices offered the opportunity to travel the world together. After living in Houston, TX, Springfield, IL, Charleston, WV and Sandy Hook, NJ the Biglers set off on a journey to Saudi Arabia to work for Aramco for five years. This proximity allowed them a base for further extensive world travels. They have also lived in Austin, TX, Istanbul, Turkey, Chicago, IL, Singapore, Macau, Jakarta, Knoxville, TN, Aurora, IL and Washington DC.

With a marriage described as romantic, thoughtful and magical with an understanding that offered both support and independence they settled permanently at RainBo Ranch in 2007. The Marble Falls land was bought in 1980. Architect Dick and designer Sylvia created and built their dream on property that abutted Sylvia’s grandparents Circle 3S Ranch. She has been the diligent bookkeeper/manager of the 3S Ranch for the past 12 years.

Sylvia enjoyed her well-lived life with a succession of four handsome Portuguese Water Dogs. She and Dick have maintained membership in the Portuguese Water Dog Association for over 40 years. She also volunteered extensively with The League of Women Voters, Meals on Wheels, The International Women’s Group as well as tutoring ESL students.

Her hospitality with the Bigler “B&B” for friends and family is renowned. Every houseguest has benefited from Sylvia's avid gardening and cooking skills, joy in watching her entertaining bird sanctuary, swimming in the Ranch’s natural swimming hole or walking the gorgeous ranch property.

Parties and holiday celebrations at the ranch were always memorable. Her 40th Birthday lifted off 5 hot air balloons from the ranch pasture to the sheer delight of guests. On her 60th birthday, a Windmill arrived on site.

When asked to describe some characteristics of herself Sylvia replied that she is Proud to be an Air Force Brat!!! She always maintained a deep love of literature, geography and history. She enjoyed fascinating travels; always adventuresome and a seeker. She had a devout love of and curiosity of all peoples. We are incredibly grateful to have known her, learned from her, laughed and conversed with her and shared her warm intelligent spirit.

Sylvia is survived by her husband Dick, sister Sydney Sledge (Darrel Barnett), aunt Sharon Gordy and numerous cousins from the Anna Mae and Henry McCauley family. She was preceded in death by her parents, grandparents and brother Thomas E. Sledge III.

Special thanks to Amelia Walton and Hill Country Memorial Hospice for their care and compassion.

Ashes will be spread in the bucolic pasture near her beloved Windmill and the Oak tree that has shaded so many. A Celebration of Life will follow at a time in the future. An online guest book may be signed at www.CremationAdvocates.net.