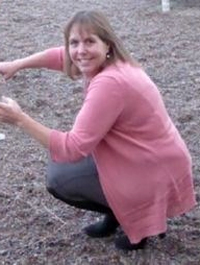 It's a rare person who can affect the hearts and minds of both puppies and lawyers. Stacey Gordon Sterling was that person. She had an immense impact on animal welfare in Montana, from raising young puppies to teaching young law students how and why they should care about animal welfare, and did so while exhibiting kindness, compassion, and competence in every sphere of her life. Stacey died, far too soon, from esophageal cancer at her home in Missoula on December 18. No one can fill her shoes. No one.

Stacey is survived by her heartbroken husband, William C. "Buck" Sterling, whom she knew from law librarians' conferences and later married at the Alaska Supreme Court. Although Stacey and Buck did not have the full span of years together that they had anticipated, the time they did have was full of love and joy, a true gift. Stacey's surviving human family also includes her parents, Harold R. and Doris Gordon (Polson, MT), and her siblings; Cory (Spokane, WA), Melanie Flynn (Lonepine, MT), and Megan Williams (Helena, MT). Stacey was also a beloved aunt to her nieces and nephews: Cassandra Mooney, Sierra Miller, Mason and Cameron Silzly and Barkley Flynn. And, of course, there are two dogs, Peggy Sue and Otis, and a cat, Cece.

Stacey's early years were spent abroad, where she attended grade school in the Dhahran, Saudi Arabia school system and became an Aramco Brat for life. During that time, Stacey had the opportunity to travel around the world multiple times and visited dozens of countries. She returned to the U.S. for high school, in boarding schools on both coasts. Stacey graduated summa cum laude from Eastern Washington University with a degree in Creative Writing, and then obtained a Masters in Library Science from the University of Washington. Stacey served as the Library Director for Salish Kootenai College for five years before enrolling in law school in Missoula. She earned her J.D. with Honors in 2000, participating both in the Public Land and Resources Law Review and the Jessup International Moot Court team.

Armed with her combination of library science and law degrees, Stacey joined the University of Montana Law School faculty immediately after graduation, first as a reference librarian and then as the Director of the Jameson Law Library. At the Law Library, she served students, faculty colleagues, and the bench and bar of Montana for over 20 years. In addition to teaching Legal Research, Professor Sterling developed and taught Animal Law and Advanced Legal Research for Academic Legal Writing, courses that continue to be important to the curriculum. Her tenure at the law school made it a much better place and was a special source of pride to those faculty members who first were her teachers and then her colleagues.

At the law school, Stacey excelled at teaching, service, and scholarship. Her C.V. lists dozens of publications and presentations, and she was frequently cited state-wide as the go-to source for difficult research issues. She also was a fierce advocate for Native American rights, and with Professor Maylinn Smith, founded and co-directed the law school's Summer Indian Law Program. Informally, Stacey smoothed the often-difficult path of legal education for struggling students and helped them become the lawyers and public servants they now are.

Stacey was also devoted to public service outside the law school. She was a regular volunteer for pro bono clinics and at the Self-Help Law Center. She was on the Missoula Public Library Foundation Board and both a board member and Chair of the Board of the Humane Society of Western Montana. In 2019, Stacey received the Ken Shugart Humanitarian Award from the Humane Society for her many activities in support of animals, including her leadership in drafting and testifying for legislation to protect both domestic animals and wildlife. In addition, at its the Annual Meeting in 2022, the State Bar of Montana awarded Stacey its Distinguished Service Award for her work as chair of the Animal Law Section, which she was instrumental in establishing.

Walking the walk, Stacey herself fostered litters of puppies and kittens in her home for many years; lots of her colleagues, students and friends found themselves nudged, or unwittingly strong-armed, into adopting these puppies, a win-win for both.

Stacey's final career move incorporated her loves of animals and the law on a national scale. Until her final illness, Stacey was the Animal Law Program Director with the Animal Legal Defense Fund, developing animal law policy, law clinics, and curriculum for law schools around the country. Most recently, Stacey was instrumental in founding the new Animal Legal Education Initiative, which started this year at The George Washington University Law School, in Washington, D. C.

Stacey was a dedicated, loyal and true friend and loved one for life. The bonds she made with those who had the pleasure to know her were unique and enduring. She was someone you could depend on without question. Her wisdom was sound and sensible, yet always delivered with a gentle hand. Stacey's death saddens, and will continue to sadden, so many of us. If you feel moved to honor her by making a contribution, please consider donating to the Humane Society of Western Montana or to the Animal Legal Defense Fund.

A Celebration of Life is under consideration for sometime in the Spring.