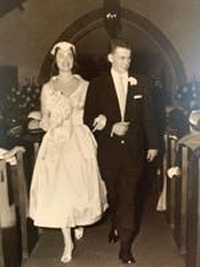 In late October, the book was closed on a beautiful love story.

Roger was born in 1928, in Berkeley, CA, the third child of Estolv Ethan and Eugenia Waste Ward. His grandfather was William Harrison Waste, a Chief Justice of the California Supreme Court. Lou was born in 1929, in Newman Grove, NE, the only child of George and Alphia McDonnell. Roger spent his early years in the Bay Area then moved with his siblings and mother to Los Angeles to do his junior high and high school studies. Oh, the antics he and his older brother got up to in those days! Lou grew up in quiet Newman Grove singing in the church and school choirs, being a high school song leader and spending many hours with her double cousins, frolicking on the various family farms. The three girls formed a trio and called themselves the McDonnell Sisters; they often sang at community functions.

Roger managed to stretch the truth about his age so he could enlist in the Navy in 1945. He spent a large part of his service in the medical core which later proved to be most beneficial. Soon after his discharge and not utilizing the GI Bill to his advantage, he was only able to get odd jobs. Moving between his sister's and mother's homes got to be problematic so he went to Saudi Arabia to work in the oil fields with Aramco.

Immediately upon graduation from high school, Lou moved to Omaha to find out about life in a big city. It did not work out as she had hoped so she moved back home temporarily. At one point, the McDonnell Sisters entered a nationwide radio talent contest run by Horace Heidt. They travelled to South Dakota where it was broadcast. They won! Soon after, for various reasons, the three young women had moved to California. They auditioned for KTLA and were hired to do the television show, "Bandstand Revue". Management changed their name from McDonnell to McDonald.

After their wedding, they moved to Omaha, NE, where Roger completed his education at the University of Nebraska College of Medicine in obstetrics and gynaecology. He credits Lou for all of her dedicated work that helped pay the bills and got him through medical school. She was quick to say he did all the studying! They were an excellent, loving team.

As a practicing doctor, Roger and Lou moved to northern California with their two young children, Andrew and Nancy. Roger shared a practice in Santa Rosa with Dr. John Bodle. In the mid 1970s, his wanderlust took him and the family to Micronesia where they lived on the islands of Saipan and then Pohnpei for a year each. He traveled between many of the beautiful islands providing medical services to the local island population, and during these travels, gather the necessary information to provide a comprehensive cervical cancer study for the US Government.

Upon their return to California, they moved to Healdsburg where Roger set up his own practice. Lou became his "office staff". Again, they were an amazing team!

As Roger neared retirement, he offered to do locums so they could travel the states. It was a perfect solution to retire his practice but not retire himself, plus they could see America. Soon, he and Lou began to travel in Europe becoming known as the "WayWARD" Travelers. Listening to their stories was a hoot. They even celebrated their 90th birthdays in Paris with their children and other extended family members. Once Roger realized that his traveling days were over, he bought a billiard table and set it up in their living room. Lou totally supported this dream after having heard all the stories of when he managed a billiard parlor in his youth in Los Angeles.

Roger will be remembered for his strong professional ethics, his love of history and travel and his truly positive attitude. Lou will be remembered as a loving, supportive wife, helpful grandmother, her beautiful paintings, her delicious pies and her delight at being with Roger!

They leave behind, a son, Andrew Ward, a daughter, Nancy Howard (Charles), both of Windsor, a brother, David Ward, of Grass Valley, six grandchildren as well as many nieces and nephews.